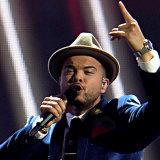 Mr Day is counter-suing Sebastian, alleging he is owed commissions for a range of services.

The case appears set to go to a hearing at which Mr Day and his former client will appear in person to give evidence after mediation between the two parties failed.

Mrs Day says in her affidavit that after leaving Sony she began working exclusively on Sebastian’s management at 6 Degrees, where she claims she charged no fees as the executive producer of his 2015 Eurovision performance despite it occupying three months of her life.

She also claims 6 Degrees charged Sebastian nothing to organise music videos and performances on TV show The X Factor , including one where she designed and built the set for the entertainer’s live collaboration with US rapper Lupe Fiasco.

Mrs Day alleges she and her husband “devised a strategy to build a profile for Guy and his wife as a giving couple” by creating the charity the Sebastian Foundation, 12 months’ work for which she claims that neither she nor 6 Degrees charged the entertainer.

Mr Day claims in his affidavit that after the singer expressed frustration at the time dedicated to undertaking charity work, he suggested to Sebastian in 2013 that they set up a non-profit so that “he might enjoy charity work more through his own foundation.”

He claims he allowed the charity to use the 6 Degrees office for free and that for a time he and his wife were both directors of the non-profit, work for which they didn’t take a fee.

Mr Day says he initially overlooked signing a formal management agreement between Sebastian and 6 Degrees and later decided against pursuing it because, among other reasons, the pair had become close friends.

Sebastian claims as part of the proceedings that he is owed 10 per cent of the shares and profits of Nexdius, a company that owns sunscreen brand Solar D. He alleges in an affidavit that he was an ambassador for the brand and that he helped attach other celebrities to it, claims that Mr Day and 6 Degrees deny.

“I did a lot of personal favours and provided a lot of services to Guy over and above 6 Degrees’ management obligations and he did things for me. We were close friends and business associates for 11 years,” he says.

Angus Thompson is a court reporter for the Sydney Morning Herald.