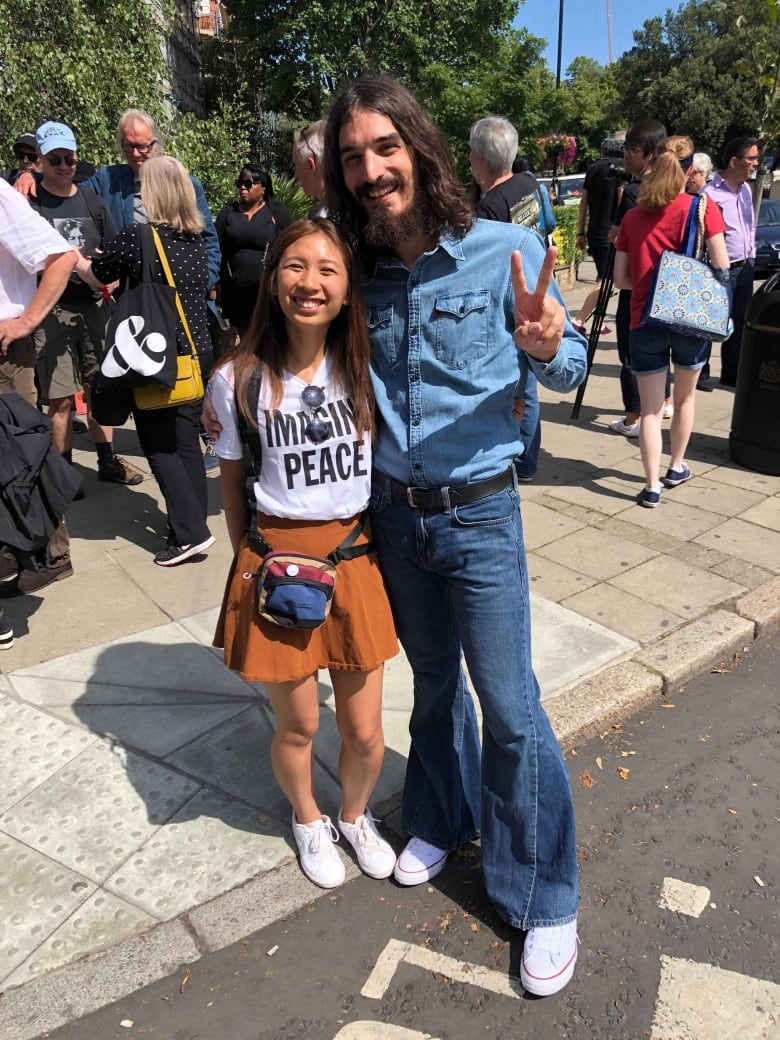 The cover for the Beatles’ album Abbey Road might, in the long history of rock and roll, be the most famous photo ever taken.

The picture was taken 50 years ago this week. On Thursday, hundreds of people gathered at the crossing where John Lennon, Paul McCartney, George Harrison and Ringo Starr went, in full stride, for a walk down Abbey Road in London just outside the EMI Recording Studios where they made the 1969 album of the same name.

Scottish photographer Iain Macmillan took just six shots of the group on the crossing, with the fifth used as the cover of the band’s 11th studio album, released on Sept. 26 of that year.

Lennon, in a white suit, is in the lead. Starr crosses in black. McCartney is barefoot, holding a cigarette. Harrison is in blue denim. There’s something in the way they move.

One of the people there to celebrate the Abbey Road cover photo anniversary was Hamilton musician Momo Raickovic. He spoke with the CBC’s Here and Now on Thursday about why he wanted to be there in person, dressed in all blue denim and doing a pretty good George Harrison impersonation. Below, you can read a transcript of his interview with host Farrah Merali.

Momo Raickovic, Hamilton musician/Beatles fan Hamilton musician Momo Raickovic — doing a pretty spot-on George Harrison impersonation — poses with his girlfriend, Chrysalene Teo, also a musician, at the edge of the Abbey Road crossing made famous in the cover of the Beatles album of the same name. (Twitter)

Merali: Hello Momo. So why did you want to be at the Abbey Road street crossing today?

Raickovic: I knew that this would be a big beautiful meeting of other Beatles people like me for the fiftieth anniversary of their crossing.

FM: So why was it important for you to celebrate the anniversary this way beyond just kind of sitting down and enjoying the record like a lot of other people?

MR: The Beatles have come to mean so much in my life. It’s gone beyond the music. It’s the message in their music that really, really speaks to me. You know, when I’m up and when I’m down they’re always there for me and I think as a means of paying a physical tribute I suppose it’s almost like in the same way that you buy some sort of physical tribute to something that you really enjoy. It makes it feel that much more real.

FM: So take me back. I understand it was 10 years ago when you first got into the Beatles. How did that happen?

MR: I think it was Rolling Stone that put out some sort of list of the top albums or top songs of all time, so that was where I started hearing a lot more of that kind of classic rock sound. I previously did utter the words “The Beatles are overrated” to my friend. A bit embarrassing to look back at now but then I remember I sat down and I told myself ‘OK these guys are allegedly the best band in the world. I’m going to start from Please Please Me — their first record — I’m going to go all the way to the end and listen to every album chronologically and read all the stories and I’m going to really I’m going to understand them.’ Before I was even finished I was completely, madly, truly in love with them.

FM: How old were you when you first got into the Beatles? You mentioned this was ten years ago.

FM: So this was a bit later in life for you or later than some people who might have grown up with the Beatles.

MR: Yeah. Absolutely. I guess you could say I was a late bloomer in that regard. It just seemed to go like that in high school for me and my friends where we all kind of started going through a classic rock phase and I guess I took it a bit too far.

FM: You can hear the Beatles in just about every kind of formation of rock that followed. Do you have a special connection then to Abbey Road specifically?

MR: I would say I partially do because of the song Something because it was five years ago that I met my girlfriend Chris. We connected through a mutual love and interest of the Beatles and more importantly, George Harrison. So from there on Something has kind of taken on a whole new meaning for me. And it was the first time that I actually sat down and, note by note, listened. I replayed the record like a crazy amount of times to properly hear George’s guitar solo and that was the first time I really learned how to play like a solo properly.

FM: It’s quite a magical song and what a beautiful song to share with your girlfriend. Is she on this trip with you?

MR: Yes. She is she’s actually right beside me.

FM:  So, what did it look like today when you went out to the Abbey Road street crossing?

MR: She mentioned that we should get off early one stop because we figured that the traffic there would be unbelievable. We ended up beating the bus on the way into the crosswalk. The cars were so packed. It was just a countless number of people there. As we got closer and closer we just started seeing heads upon heads upon heads upon heads and suddenly there we were in the midst of this giant crowd all standing around a zebra crossing. Some people were just soaking it all in which was actually kind of cute. I think they were just happy to be there. A lot of people were filming. A lot of people were dancing and singing. There were a few guitars taken out over there which was beautiful.

A guy actually let me borrow his guitar so I managed to get in a few tunes and every time somebody started a Beatles song there was a swarm that just surrounded them and everybody joined in.

FM: That reminds me of when I was in New York. I remember I went to the John Lennon memorial in Central Park and someone just spontaneously started playing Imagine and just all of a sudden, dozens and dozens of people just kind of swarmed around.

MR: It’s that positive message, honestly, that’s just evident through their entire career. And when you hear that, right, you get this little feeling inside of you, like you know it’s all gonna be OK. And, I think that message really speaks to a lot of people.

FM: So how did mark the celebration? Did you grab a photo at this iconic crosswalk? It must have been hard, I imagine, with the crowds.

MR: It was really hard but I was actually surprised with how orderly it was. The police had to end up coming in but people were very, very kind and pleasant about it all. They formed a little bit of a line and we kind of all waited on the sides and the cars went by. And the Abbey Road studio put a a big backdrop where you could stand in line to get your photo taken behind the proper scenery that’s on the album cover. So, we ended up doing that. They had little white footsteps to indicate where your back foot should be to match the Beatles.

FM: You talked about why you love the album so much because of your connection to the song Something. Why do you think that people are celebrating this anniversary today? What do you think it is about this album as a whole that resonates with people?

MR: This was the last one that they properly all recorded together as a band — I know Let It Be came out afterwards — but Abbey Road, there was something magical about this album — just the four lads getting back into it. Let It Be sessions really tired them out and I know that there was a lot of infighting. So, for them to kind of come together for one last, unbelievable album from start to finish — there’s not a single down moment in this this whole this whole thing. Everybody brought their A game. I think it’s such a beautiful and perfect ending to such a magnificent career. 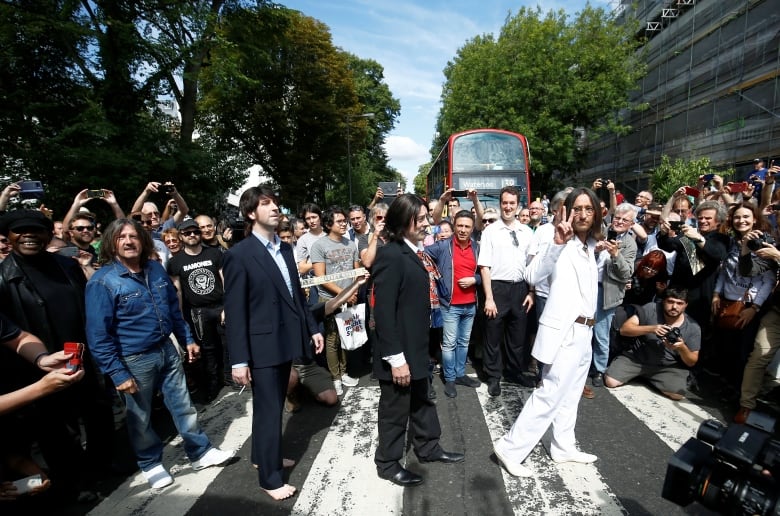