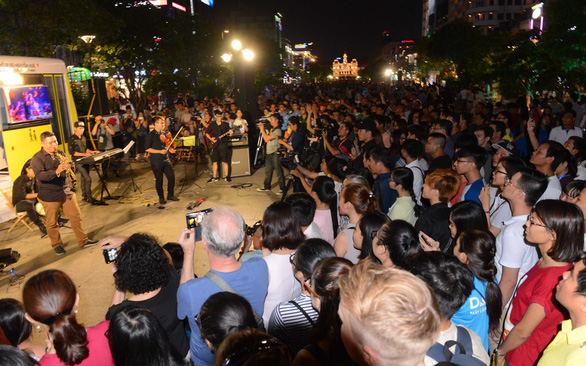 HCM CITY — HCM City will host Hò dô 2019 (HOZO), an international music festival on December 13-15, according to the city’s Department of Culture, Sports and Tourism.


The festival is part of HCM City’s strategic investment plan to develop the city’s cultural industry until 2020.


HCM City has long been considered a place with the most exciting music activities in the country. However, many locals have not had a chance to experience the real spirit that a festival should have.


For the past 10 years, many music lovers could only be proud of Giai Điệu Mùa Thu (Autumn Melody), a festival dedicated to classical music.


Though it cannot be denied that HCM City has hosted interesting music events, many of them were sponsored by brands for both cultural and advertising purposes.


With that, HOZO will be the first international music event that is backed up by the state.


According to deputy director of the HCM City Department of Culture, Sports and Tourism, Nguyễn Thị Thanh Thuý,  HOZO will offer a precious opportunity for traditional music to merge with modern music, spreading the value of national music and culture to the world.


The HOZO international music festival is expected to take place between December 13 and 15 on Nguyễn Huệ Pedestrian Street in District 1.


A variety of performances will be offered, from jazz and pop to traditional music.


Locals will be able to enjoy music activities as well as exhibitions and food fare at the festival.


Two seminars on world music trends and the country’s music industry under the impact of 4.0 industry and international integration will be held as well.


To create a meaningful playground for Vietnamese music talents, HOZO plans to dedicate a stage for a band that will be selected by the organisation board.


Young bands from across the country are encouraged to submit their performances via https://hozomusicfestival.com for a chance to be selected and to perform with the international line-up during the festival.


Musician Huy Tuấn, music and art director of the festival, said that all cities should have music festivals, especially HCM City, since it is the biggest city in the country and has a diverse music market.


The festival allows local residents to discover different types of music and artists and also offers them a chance to reunite with their friends and family at a joyful event, according to Tuấn.


The festival also offers professionals a platform to expand their audience and performance venues. – VNS