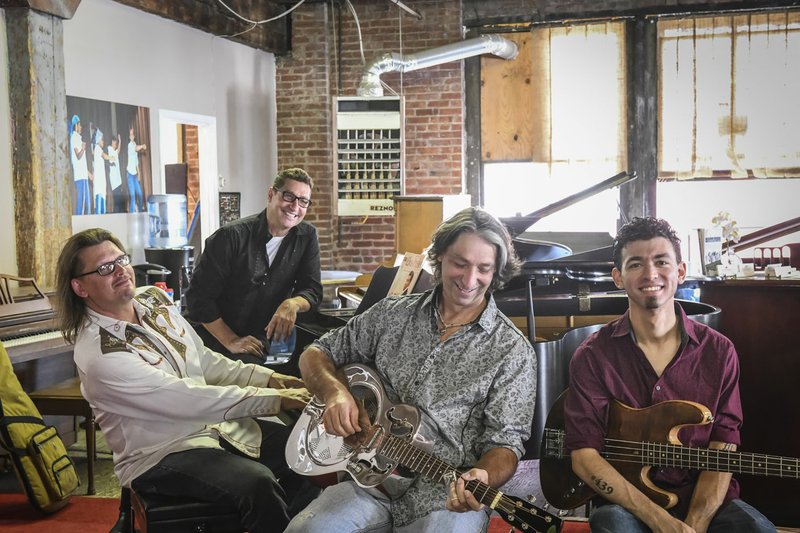 Courtesy Photo David Nace is the lead singer and drummer of the fourth generation performers the Nace Brothers, whose sound has come full circle, he says, as the group takes on more intimate shows that bring the musicians back to acoustic instruments and music like their granddad played.

Kansas City-based roots rockers, the Nace Brothers Band, have a connection with Fayetteville that stretches back nearly as long as the group has been performing together.

“I remember playing that Springfest,” lead singer and drummer David Nace says of the 1992 date that Walton Arts Center programming director Jennifer Ross fondly recalls as her first time seeing the band. “But I think we might’ve actually played George’s [Majestic Lounge] before that — going clear back to probably 1990.

WHERE — Walton Arts Center in Fayetteville

BONUS — Listen to a clip of David Nace discussing the band’s newest member, bass player Chase McRoy, with the online version of this story at nwadg.com/features/whatsup.

“I remember the first time we played there, they had some construction going on, and it was kind of a cold and rainy night. I think we might’ve made $60 at the door,” Nace recalls with a laugh. “And the folks that were running it that at the time were so encouraging to us. They were saying, ‘I know it’s not a very good night, but man, what you guys are doing, if you can just stick with it, it’s really going to go good here.’ And they were absolutely correct.”

Many more performances at George’s, a continued friendship with the Cate Brothers and other local names, and collaborations with Ben Meade at Cosmic Cowboy Studios have bolstered that relationship with Fayetteville through the years. And now the four-piece brings a different side of their country, blues and roots rock blend to the Walton Arts Center for a performance unlike any they’ve done in Fayetteville before.

“It’ll be more of a relaxed atmosphere and with the acoustic guitars, and I think we’ll be able to really focus more on our songs and maybe talk about where they come from,” Nace says of being part of the WAC West Street Live series lineup.

“It’s a different dynamic as far as the energy from playing a bar or club situation. We have a pretty big group of fans in the Fayetteville area, and I don’t know if they’ve seen us in this particular light. So I think we’ll have a chance here to make some new fans and we’ll also have a chance to show what can do to our existing fans who haven’t seen us in this format.”

Print Headline: Nace Brothers Show Off Intimate Side Of Music