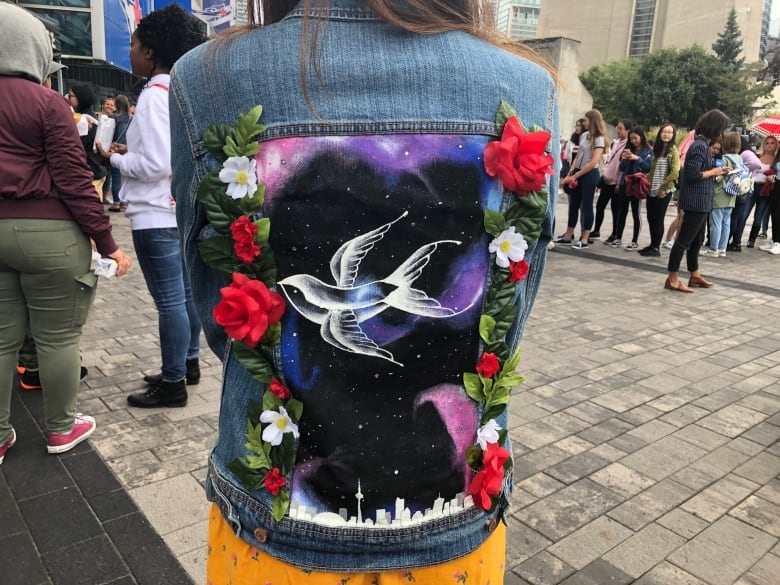 Jaylene Villarreal is only 17 years old, but the San Antonio teenager says she has already seen Shawn Mendes live in concert six times.

Villarreal spent two full days putting together her outfit for her seventh show, which was held Friday night at Toronto’s Rogers Centre.

“His music’s so good, it’s so amazing and he does every part of the process from writing to producing and it’s so incredible,” Villarreal told CBC Toronto.

Villarreal’s jacket was painted with what she said is one of Mendes’s tattoos. The background includes the visuals from his song Why, flowers representing his Meet and Greet as well as the Toronto skyline.

The back of Jaylene Villarreal’s jacket. She says she spent 2 days preparing her outfit for Friday’s concert. (Angelina King/CBC)

Villarreal and her friend Gabrielle Sanchez, 15, from Lewiston, New York, were among thousands who lined up for the sold-out show.

The two met on Twitter because they are both Shawn Mendes fans.

Mendes, 21, a native of Pickering, Ont., is currently riding high with his inescapable single Senorita — a duet with Camila Cabello that became Mendes’s first No. 1 single on the Billboard Hot 100 this summer.

But for Sanchez, the Canadian singer and songwriter isn’t only an artist — he sets an example too.

“He’s a really good guy. He just released the Shawn Mendes Foundation. I think he really cares about the people around him and I feel like that’s a really good representation of what Canadians are,” Sanchez told CBC Toronto.

“I think Canada is kind of proud to have him as one of their little ambassadors and what not.” 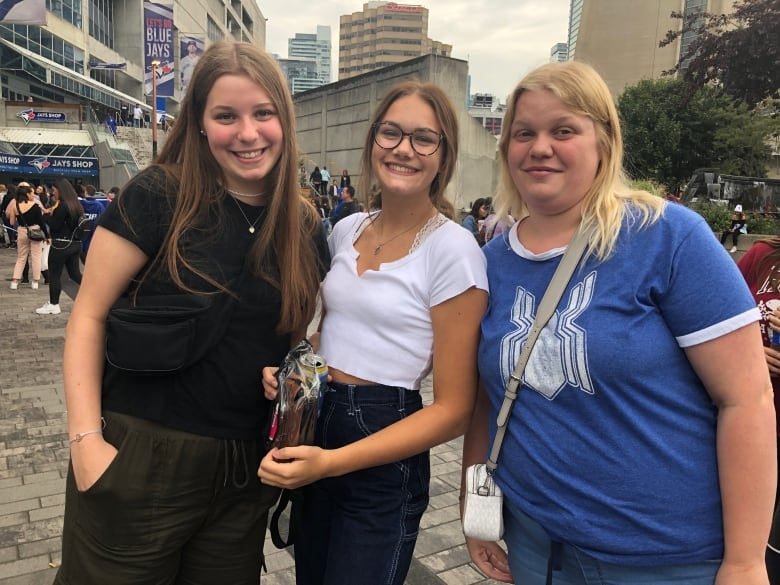 Adriana Attardo, 16, from Toronto, left,; Rachael Dehoog, 17, from Oakville, middle,; and Mikaela Attardo, 23, from Toronto, right, were all smiles ahead of Friday’s concert. (Angelina King/CBC)

In addition to his concert, Mendes has partnered with two Canadian companies that have pop-ups outside the concert venue.

Tim Hortons is one of them, which introduced Shawn Mendes-themed coffee cups as part of their “Hometown Hero” campaign in honour of the superstar returning home for the Toronto concert. Roots Canada is the other.

Adriana and Mikaela Attardo, 16 and 23 from Toronto and their friend Rachael Dehoog, 17, from Oakville, think it’s inspiring to see a guy from the GTA make it so big.

“I just love his music so much, it has an amazing message to it and I love what he promotes. He’s just super cool,” said Adriana Attardo.

For Dehoog, Mendes is an inspiration to young people everywhere.

“Honestly, it’s like so inspiring to see somebody from the GTA make it so far and put themselves out there and just become a huge success,” Dehoog said.

Mikaela Attardo was in no way bashful about how she feels.

“He’s so freaking handsome. My sister loves him more than me. I really love him,” she said.

Concert has attracted people of all ages

In addition to amassing fans from all over the world, Mendes has also attracted people of all ages.

Chloe Busman from Ajax, Ont., celebrated her 11th birthday at the concert with her sister, mother and grandmother.

Busman said Mendes has inspired her.

“I just love all his songs and he inspires me to sing,” she said.

In my Blood was her response when asked which was her favourite song by Mendes. 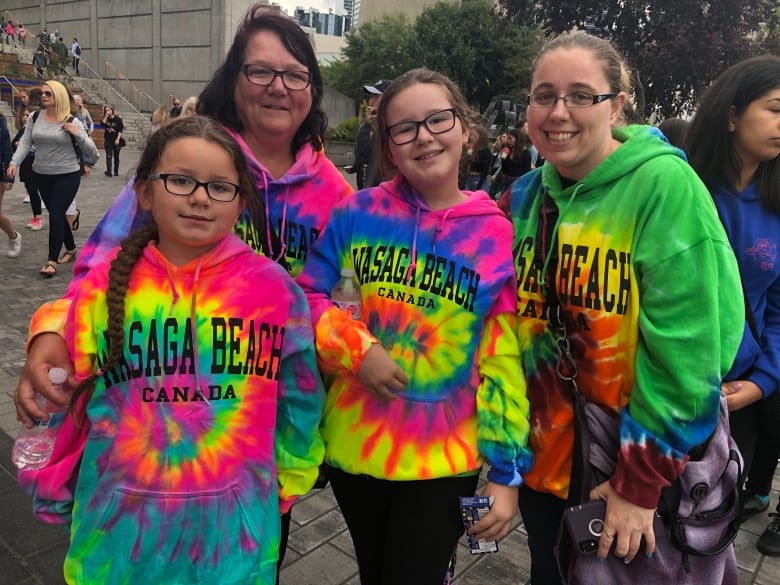 Chloe Busman (centre), from Ajax, Ont., celebrated her 11th birthday at the concert with her sister, mom and grandma. (Angelina King/CBC)

Marisa Pagniello and Alexia Polletti, both 17, said they have been listening to Mendes’s music from the time he was in a Vine group called Magcon Boys.

They now feel connected to the singer and his music because they listened to him throughout their entire teens.

Pagniello had a message for Mendes.

“I love you so much and your voice is beautiful.” 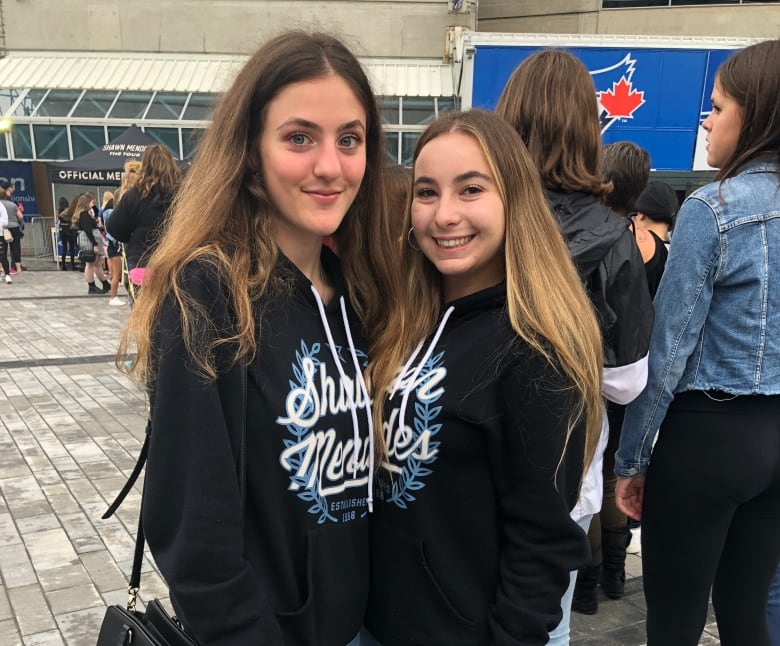 Marisa Pagniello (left) and Alexia Polletti, both 17, say they have been listening to Mendes’s music from the time he was in a Vine group called Magcon Boys. (Angelina King/CBC)

Polletti said this was her fourth time seeing Mendes in concert.

“I just felt like I have been growing up with him. I’m almost 18 now and I started being a fan when I was 12 so I feel like I have a good connection to his albums and they are relatable.”