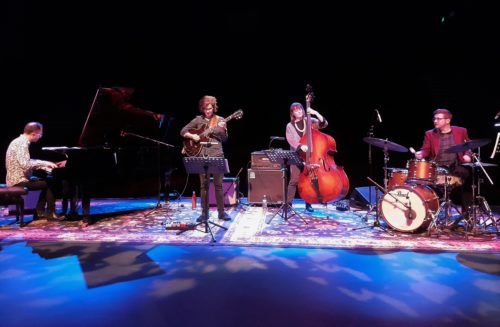 WHAT do you call music that crosses many genres, like post-rock, post-jazz and post-minimalism? In the case of Spirograph Studies, it’s called original and fascinating music.

Spirograph Studies, who have leaped onto the Australian music scene with their nuanced and colourful approach to playing improvised music say: “They shamelessly steal sonic palettes from all areas to build their cinematic sound.”

The group who are on a tour in Australia and New Zealand are led by Tamara Murphy as bassist and composer. They include Luke Howard, piano; Fran Swinn, guitar; James McLean, drums.

The small audience got to sit on the stage with Spirograph Studies in the Street Theatre Two. The atmosphere could not have been much more intimate or effecting.

A regular pulse on the drums set the pace and the mood for the opening work, “The Opposite of Afar”. The sound washed over the audience as the tempo and volume increased then subsided into a mellow, dreamy fusion of music.

The four players have a real feel for the music they make and perform. Even with little going on they sound rich and full and relaxed.

There are a few interesting aspects of this group. Each instrument is amplified or mic’d up. They all read from sheet music, but still manage to sound like free jazz. They offer a unique perspective on music. While they all perform as a group, they sound like it is four soloists playing together. It’s a bit like hearing four people all talk at once and it makes sense, with emotion.

The colour and variation that came from McLean on drums was something else. He seemed to be able to create any sound or rhythm he liked from his small kit. It was like listening to a masterclass in action.

Swinn on guitar, who has the lead voice of the group, was driven, engaged and passionate all the way through.

Murphy on bass is the driving heart of the group. She owns each piece as the composer and a performer. She lives in her own world while playing and she performs with accurate clarity.

They wound the night up with a piece called “M31”, which begins with a subtle arpeggio-like tune on the guitar. Then the pianos softly slid in to accent notes and added a further melody of its own. Soon the sound became hypnotic as the piano spiralled around and all the others filled the places in-between.

Australians and New Zealanders should get out to experience Spirograph Studies while they are on tour, because they are worth the effort.