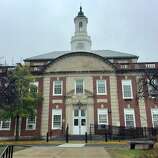 STAMFORD — Last June, Stamford High School’s chorus and orchestra teacher, Gloria Sinaguglia, completed her final year of teaching after 30 years at the school. During her time here, she taught a wide range of classes, including orchestra, chorus, and piano classes. She is also credited with starting Stamford High’s Madrigals Singers group and preparing the ensembles that were played for President Clinton and President Bush. Saying that she left her mark on the school is an understatement. Principal Raymond Manka named the chorus room, where she did the majority of her teaching, in her honor.

Similarly, but less publicly, the school’s band director, George Beratis, resigned from his position at Stamford High this summer. After both attending Stamford High as a student and teaching for about a decade, he decided to “make a change” and take an open position to be band director at Ridgefield High School.

This left Stamford High with no remaining music teachers and left administration scrambling to find the right fit. So, who did they finally decide on?

Meet Victoria Hervieux, Stamford High’s new chorus and orchestra director, who will fill Ms. Sinaguglia’s position for the upcoming years. To the juniors and seniors of the music program, she isn’t a new face. Hervieux actually student-taught alongside Ms. S two years ago, and many remember her. She herself says that she was very happy to see so many familiar faces during her first days.

Before taking her official position at Stamford High, Hervieux spent some time teaching in Bridgeport, after which she worked as a long-term substitute at Rippowam Middle School and Dolan Middle School. Her last position before Stamford High was at the Turn of River middle school. “I couldn’t leave Stamford,” Hervieux said in her interview.

When asked how the school year has been going so far, she wholeheartedly replied that she loves it, and that seeing all of her students, whether the faces be familiar or new, has been very exciting for her. It is clear that she is truly eager to be part of the Stamford High community. “I’m ready to go buy all my SHS gear and deck out my office,” she said.

Regarding her future at Stamford High, Hervieux has goals in continuing the Stamford High traditions that her new students are used to, but also adding a bit of herself into the mix. Although confident in her numbers for the year, she still makes a point that she is always welcome to new faces and wants as many people involved as possible. Hervieux is very enthusiastic about her new role in the Stamford High community and she will not fall short on her goals.

Joining her on the fourth floor in the band room is Brendan Michalko. Along with teaching guitar, band, and AP Music Theory classes at Stamford High, he will also direct the band on the many events and trips that they have planned for the year. He says that being a high school band director has always been a dream job, so when the opportunity came, he took it. “I’ve always enjoyed the collaboration and the opportunity to work with other people and getting to be a music teacher means you get to do that every day, and that’s just the dream, to make music every day,” Michalko said.

Michalko has always worked in Stamford. He worked as a music teacher at Springdale and Hart elementary schools, and assistant directed the Westhill marching band. In regards to the school year so far, he said, “so far, so good.” Michalko is hoping to grow the program, but just like Hervieux, he plans on keeping things similar to the past years. However, when asked about any big changes, he eluded that he didn’t yet want to reveal anything publicly.

Both of the new teachers emphasized the importance of making students comfortable during the transition. Senior Carlos Lopez, Tri M president and one of the two drum majors of the SHS marching band, commented on the transition process from two familiar music teachers to two completely new ones. “At first I was sad, but after that I realized that change is good. We all needed kind of like a refresher.”

With that, Lopez’s outlook on the situation has been positive, and he says that so far, the transition has been a smooth one. He notes that the success of the program still relies on the students themselves, and encourages people to become involved in the music program at Stamford High. “Y’all need to support us, like we support you guys at the games,” Lopez said.

Sofia Sarak is a junior at Westhill High School.