“I came upon a child of God, he was walking along the road/and I asked him, where are you going? And this he told me …”

Through the haze of memories real and imagined, the recollections of those who actually were there at Max Yasgur’s farm on that August weekend in 1969 and the convoluted imaginings of those who weren’t but insist they were, the garnishing and adornment of nostalgic media musings, the aural and visual evidence of the recordings and the movie, we glance over our shoulder and ask: What was Woodstock? What does it mean 50 years on?

We find it means everything. And nothing.

It was a mess, really. You can tell as much from the movie commemorating it, which is as close to the original festival as I ever got. (I was 2 when it happened.)

A festival for hippies, conceived by hippies, run by hippies, it was a magic city within a thin soap bubble, one bound to burst if it came into direct contact with reality.

The schedule became a pipe dream as the festival took on a life of its own.

It rained, and then came the mud. Organizers were disorganized, and so there weren’t enough bathrooms, there wasn’t enough water, and there was some bad LSD making the rounds. Two people died. Untold new life was conceived.

Those “in charge” were ill-equipped to handle the influx of people. So the gates became symbolic rather than tangible, thousands entered for free, and thus, there was little chance the artists were going to get paid.

Yet, somehow, the bubble never really did burst. 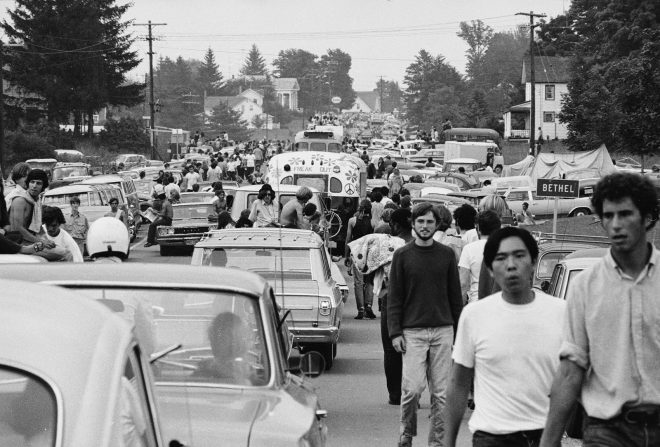 People walk along roads choked with traffic on the way to Woodstock in Bethel in August 1969. (Photo by Hulton Archive/Getty Images)

Maybe it was a debacle on the organizational level, but the music? That was something else. It didn’t seem to bow to consensual conservative demarcations of reality.

It railed against the dying of the light when a then-unknown young Mexican immigrant named Carlos Santana led his band through the primordial jungle that was “Soul Sacrifice,” while enduring an ill-timed acid trip.

It cried, it moaned, and it screamed in anguish as Jimi Hendrix played “The Star Spangled Banner.” The butterflies turned into fighter planes and then back into butterflies, as this beautiful man conducted it all with a mastery beyond mere spoken language, telling the story of a nation ripped in two by war and racism and inequality and compromised by blown opportunities to heal and grow and adapt.

It traveled deep into the subconscious jungle of the American imagination when Richie Havens improvised “Freedom/Motherless Child,” because he had run out of songs to play and he had to kill more time while the mostly stoned stagehands finished building the stage around him.

It offered a shaky, tentative outstretched hand in hopes of communion, as Pete Townshend prefaced The Who’s “My Generation” by saying, “This is a kind of hymn. … It’s a song about you and me. … We’re getting a bit old now …”

Who could have believed at that moment that, yes, we would indeed grow older still? 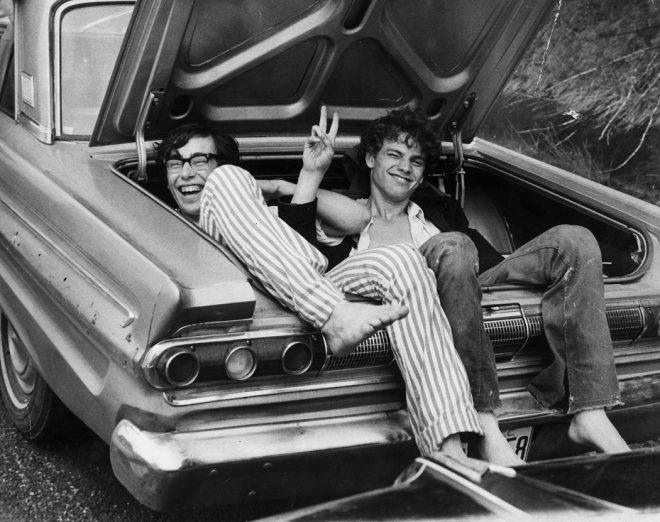 “By the time we got to Woodstock, we were half a million strong/And everywhere there was song and celebration/And I dreamed I saw the bombers riding shotgun in the sky/And they were turning into butterflies/Above our nation …”

Joni Mitchell, who wrote these words, never made it to the festival. She ended up abandoned at the airport while her entourage proceeded on toward the imagined nirvana. Perhaps that’s why she was able to see its outline so clearly.

“Then when I saw the magazine articles and pictures of them and everything, I really, really felt sorry for myself, because it’ll never happen again, of course,” Mitchell said while introducing her song at a December 1969 concert. “They’ll try and recapture it, you know, and it’ll just get worse and worse and worse. Well, maybe that’s a pessimistic way to look at it, but I don’t know …”

But now we do know.

Trying to re-create the Woodstock magic

They tried again in 1999, but though there were some decent acts on the bill, the unifying thematic material, the sense of a counter-culture given voice by music that was at once popular and meaningful, was largely gone.

But by now, Woodstock is clearly just a brand. It no longer carries any real cultural weight. If it had happened, if it had not been a train wreck right out of the gate, one that was canceled a mere two weeks before it was supposed to go down, it most likely would have been just another concert, another drop in an already overflowing bucket of “Who Cares”?

Woodstock has now taken up firm and permanent residence in the castle of mythology, but is this necessarily a bad thing? No. Because now it can have resonance beyond the mud, the brown acid, the inexcusably poor organization, the crashed gates.

This, ultimately, is Woodstock’s gift to us. That moment when it seemed our music really could transform us and therefore, it might be able to transform the world, too. A dream is not a lie if it doesn’t come true. It just needs new dreamers to give it new life.

It was everything. And it was nothing. If the last thing we need today is another corporate pop festival, we need the idea of Woodstock now more than ever.

Because we still don’t really know who we are, do we?

But life is for learning. 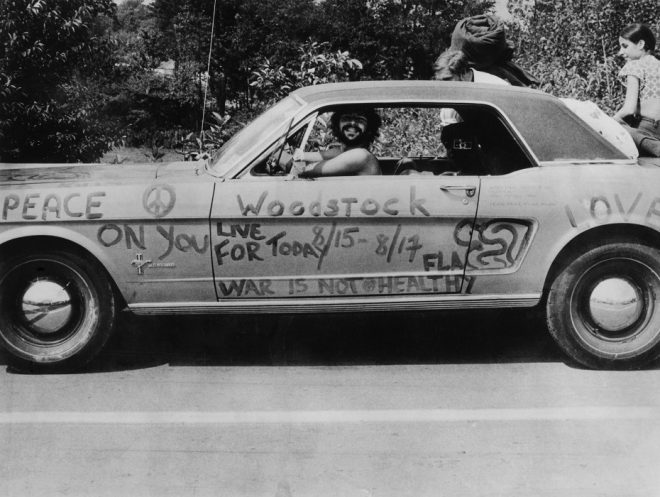 A fan at Woodstock in his car covered in slogans. (Getty Images)