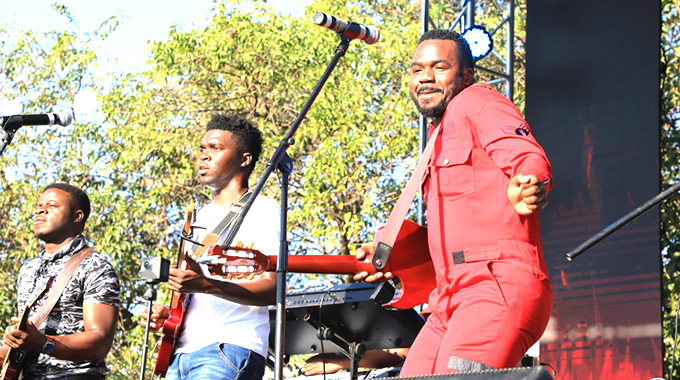 The annual Jacaranda Music Festival held over the weekend at Hellenic Sports Club in Harare did not only light up Harare but was also a mixed bag of surprises and entertainment.

It kicked off on Friday and ended on Saturday, with music genres such as reggae, urban grooves and Afro-fusion on offer.

The huge turnout by revellers from different communities has sparked the question: Has the Jacaranda festival replaced the Harare International Festival of the Arts (HIFA)?

On Friday, the battle began with local acts such as Bryan K, Ammara Brown and Sylent Nqo not only warming up the stage for Saturday acts but proving their mettle as they belted out tune after tune.

On the urban grooves side, “Houz of Gruv” — Roki and Kelvin Vito — put up scintillating performances.

Roki literally set the house on fire with his old songs and energetic moves.

Mafriq (Pauline Gundidza, Discord and Tunga) gave revellers a Destiny’s Child SuperBowl Halftime when they surprised guests with their performances.

The trio performed their hit song “Chizevezeve”, driving fans into a frenzy.

Not to be outdone was South African house duo, Black Motion, who put up a commendable show.

On Saturday, the event saw Mbeu’s star continuing to rise as he delivered a polished act, just like teen sensation Tammy Moyo, who appears to be maturing with age like wine.

Tammy Moyo sang songs like “Ndibereke”, “Lay It Down”, “Kwandinobva”, and “Beautiful”, among others.

The singer literally gave fans value for their money.

The late Dr Oliver Mtukudzi’s band, the Black Spirits, wowed the crowd with some of Tuku’s hits.

So well choreographed was the show that one struggled to tell that the iconic Dr Mtukudzi was missing.

However, he didn’t do justice as his performance was largely lukewarm. It is unclear if he was affected by the fact that he used another band, not his usual Third Generation band.

South African musician Ringo Madhlingozi also proved that he remains the ladies’ favourite, as he performed songs like “Sondela” and the popular “Into Yami”, with some of the Black Spirits members.

Some of the performers who rocked this year’s festival included Mokoomba, Jesa, ProBeatz, Djembe Monks and Bekezela and Norman Kasamba, among others.

Said event organiser Walter Wanyanya: “Plans to grow the festival from a one-day event to a three-day event are now on the cards, with one day being a full day for free workshops for creative professionals.

“You will see us adding more aspects to the festival so that we maintain world-class standards on how festivals are delivered. It still remains about the city, its people and music.” The Herald