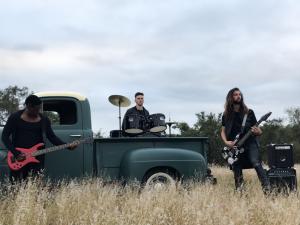 It’s hard to face it anytime things don’t work out as planned or when someone you love walks away.”

ORLANDO, FL, UNITED STATES, January 30, 2018 — The multi-talented KAJ Brothers have released the third video from their Chivalry EP with today’s debut of Nothing but Air on YouTube. The ballad tells the tale of lost love and features the signature harmonies of Kyle Craichy, Austin Craichy and Johnny Atys that have made the band a favorite among those who value strong vocal abilities.

Austin wrote the lyrics that tell the deeply emotional journey of experiencing a breakup. “It’s hard to face it anytime things don’t work out as planned or when someone you love walks away,” he says. “But that’s not the end of the story because better days are ahead and things will work out if we keep moving forward.”

The video can be seen here: https://youtu.be/Ru7Q5XK_FP4

The KAJ Brothers have a growing following as a result of previous video releases from Chivalry. The first two songs, She Wants to Dance and Love on the Dance Floor, have a combined 400,000 views on YouTube. The video was shot at various locations in Orlando by Kyle Saylors and Saylor Brothers Productions, the team that produced the first two videos.

The KAJ Brothers are a unique trio of pop, rock and R&B performers known for soaring vocals, masterful harmonies and exciting musicality. While best known for a pop/funk sound from their recently released Chivalry album, the popular boy band has the talent to perform a variety of musical styles.

The Chivalry EP and the singles are available on iTunes, Google Play, Amazon, Spotify, Apple Music and anywhere else music is sold. They are also available on the KAJ Brothers website at www.kajbrothers.com.

More about the KAJ Brothers:
The multi-talented, Orlando-based KAJ Brothers consists of Kyle Craichy on vocals, dance, piano and guitar; sibling Austin Craichy on vocals, dance, piano, guitar and drums; and vocalist and dance champion Johnny Atys, from Paris, France. Kyle and Austin were born in Tampa and learned to sing and play the piano from their mother, Monica, who was crowned Miss Florida in 1985 and won the talent award for her classical piano performance of Rachmaninoff at the Miss America Pageant. Kyle is also the best-selling author or Face It: Winning the War on Acne and the founder and CEO of AcneLXR. The KAJ Brothers regularly work with Orlando’s renowned producer/vocal coach Gerry Williams who helped craft the boy band sound for N’Sync and The Backstreet Boys. They have also worked with Jeff Villanueva, whose client list reads like a Who’s Who of top pop artists, including Usher, Justin Timberlake, Mariah Carey and Beyonce. More information can be found at: https://www.kajbrothers.com; https://www.facebook.com/kajbrothers