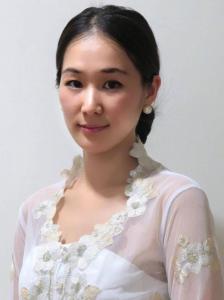 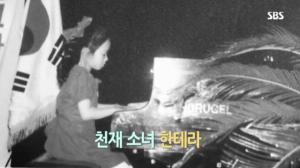 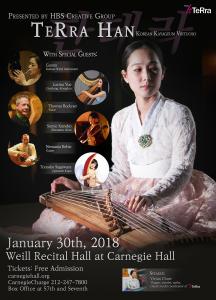 TeRra Han, well known for a prodigy and musical genius of South Korea will have a her 2nd Carnegie Hall recital January 30th 8pm.

NEW YORK, NEW YORK, UNITED STATES, January 29, 2018 — TeRra Han, well known for a prodigy and musical genius of South Korea will have a Carnegie Hall recital January 30th 8pm. This is 2nd Carnegie Hall recital of hers, she had a debut recital in the Weill Recital Hall, Carnegie Hall 2015 as the youngest Korean traditional musician who ever had a recital at the Carnegie Hall, it was one of the celebrating anniversary concert of 125 years of Carnegie Hall. Many of Asian instrumentalists will perform as special guests such as wind instrumentalist Gamin, Konghou player Lucina, Japanese Kugo player Suwagara Tomoko, shamisen player Sumie Kaneko and also vocalist Thomas Buckner, guitarist Nemo will join.

TeRra Han started her training at the age of 4 in Western classical music and Asian traditional performing arts including singing and dancing in Korea, Japan and China. She began studying Korean traditional music at the age of 6 and already mastered all gayageum-accompanied solo pieces in her teens. She was the first gayageum player to be named as the recipient of the Asian Cultural Council’s Blanchette Rockefeller Fund.

It’s already been 30 years since TeRra Han started studying the gayageum and Korean traditional music. She has been collaborating with foreign musicians and playing American pop songs or European classics with the gayageum to publicize this wonderful string instrument of Korea.
On the other hands After having survived the emotionally tumultuous years in her teens and 20s, she finally found the essence of classical gayageum music in her 30s and is trying to develop a way to make the best gayageum sound. Determined to show the fundamental beauty of the gayageum, TeRra Han chose Korean ancient court music solo pieces of all repertoire for her gayageum solo albums released in 2015 and nobody have done recording the master pieces which she had ever challenged.

For over the 30 years, TeRra Han has also explored musical world and led Asian young artists on a path to self-discovery and helped them to imagine the possibilities. Beyond the time and space borders inspirational careers, TeRra Han continues to inspire and encourage the next generation of musicians & artists that they can do anything with their music.

She released more than 10 solo albums and has been performing all over the countries such as South Korea, Japan, China, the United States and France. In 2016, she was admitted voting member as few Asian musicians of the Grammy Awards of The Recording Academy in United States. She has moved to New York City 2017 and launched world premiere Asian arts magazine, TeRra™ Magazine.