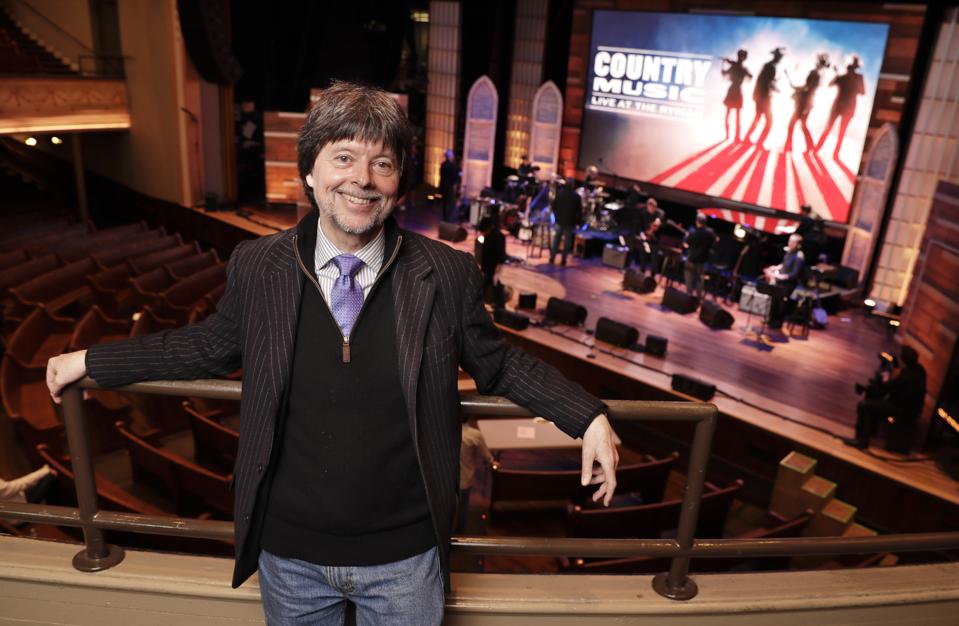 Filmmaker Ken Burn poses in the Ryman Auditorium Wednesday, March 27, 2019, in Nashville, Tenn. The Ryman was home to the Grand Ole Opry from 1943 to 1974. Burns hit the road this month on a bus trip to preach the gospel of “Country Music,” his new

He’s explored the Civil War, the history of cancer, and the National parks, among others.

When documentarian Ken Burns decides to examine a topic, he goes all in.

In his latest piece, Burns devotes 16 hours to telling the story of Country Music.

He’s enlisted a who’s who of the genre to contribute to the project, including three iconic country, Rosanne Cash, Marty Stuart, and Dwight Yoakam.

Explaining his methodology when approaching a topic for one of his films, Burns says, “When I was trying to raise money for my first film called Brooklyn Bridge’ for the public broadcasting, I said that I was interested in not just excavating the dry dates and facts and events of the past, but I was interested in an emotional archeology. It wouldn’t be sentimentality or nostalgia. That’s the enemies of good anything. But it would be an emotional archeology that would seek what we all look for in our lives, something higher than the mundane, where periodically one and one equals three and not two.”

For this particular topic, Burns admits that he was a bit out of his league. “I was completely unprepared on this project. And I think I speak for Dayton Duncan, the writer and coproducer, and Julie Dunfey, the producer, that we were unprepared for the kind of higher emotions we would run into and find unavoidable in mastering this very complicated story about this music.”

Burns says that he’s a child of rock and roll and R&B and knew a little bit about country music having worked in a record store in Michigan in the late ‘60s and early ‘70s. He believes that telling stories about American history and culture is what drew him to this topic, or rather, that maybe the topic picked him. He explains, “There’s a moment when Vince Gill in our film says, ‘I don’t know whether you write the songs or the songs write you.’ You know, I feel in some ways the projects pick us.”

The music is not all ‘hound dogs, pickup trucks, good old boys and six packs of beer,’ says Burns. “It’s really hard to acknowledge that [the music really] deals with two four letter words that are very difficult to talk about, which are love and loss.”

Yoakam agrees, adding that it’s about belonging. “We come and go alone in this life. And I think there is a desperate need to feel a sense of community.”

Cash says that it’s healing for people to recognize their stories in songs, believing, “We are in the premier service industry of the heart and soul. That’s what artists do.”

It’s the absolute right time for this series, says Yoakum. “We’re probably the most informed generation in at least modern history, but we’re often the least thoughtful because of something I have in my pocket, a smartphone, and all we’re inundated with information, but there’s not often a lot of thought behind it. The best way, in terms of all learning, is to engage you, the individual, with your own critical thinking about things, America has everything in common with this music. This movie is perfect for the moment.”

As Burns makes an appeal to viewers to tune in, he cautions against writing the film off if someone is not a country music ‘fan.’