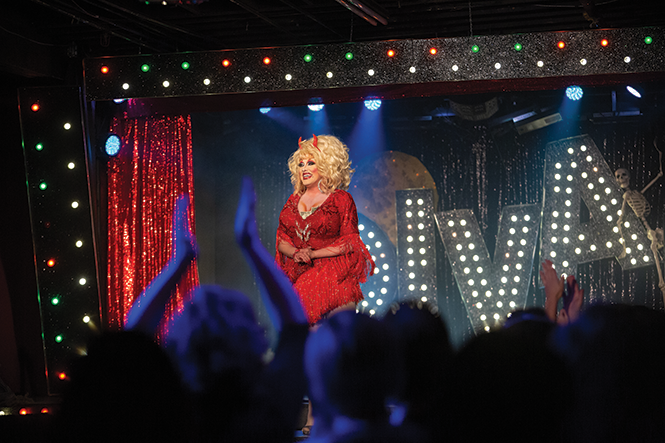 FRIDAY 10/25
Trick-or-Treat Diva!
Viva La Diva’s “Trick-or-Treat Diva!” show is, if nothing else, a celebration of the dragtacular divas who make up our collective sense of Halloween’s saucier side. This year’s performance promises trick-or-treat costumes like Devil Dolly Parton, Witch Cher, Katy Perry’s Alien and, of course, Lady Gaga’s Monsters. If you’ve never attended a Viva La Diva show, it’s celebrity impersonation drag where emulation is the goal. These aren’t homespun drag personas, but expressions of the people who have become characters in our lives—tributes to the stars who exist so thoroughly that their being lingers in our minds well beyond our actual experiences of them. The event at Metro Music Hall is 21-and-up, but the show is intended for anyone with a good sense of humor and an appreciation for raunch. Viva La Diva promises to do Bette Midler, Kathy Najimy and Sarah Jessica Parker justice this year with its tribute to Hocus Pocus, the seminal 1993 Halloween film popular among Utahns for its Disney approach to witchiness. Jason CoZmo, celebrating 20 years of performing experience, hosts the event; other performers include Cody Rose and his spellbinding Katy Perry and David Lorence as Cher. Finally, the show features performances from Cats, Beetlejuice, as well as characters Elvira and Frank-N-Furter. Get into the spirit of the season and treat yourself to this ghoulishly fabulous drag show. (Parker S. Mortensen) Metro Music Hall, 615 W. 100 South, Friday & Saturday, 8 p.m.; Sunday, 2 p.m., $30, 21+, thevivaladivashow.com

Tom West
Despite in many ways fitting the aesthetics of other modern folk artists, Australia-based Tom West’s quick plucking fingers and sighing, folk-lilted voice are strikingly unique and compelling. There’s something true-blue and deep about his songs, which align him as much with the likes of Kurt Vile (though with less meandering grit) as much as it does with influences like Neil Young and Joni Mitchell. Songs like “Malécon,” from his 2013 debut A Spark in the Dark, align him with other players of that moment, as a soft-handed horn section lends him a bit of the cinematic scope of acts like Beirut. His banjo-assisted song “Easy, Love,” off his 2015 effort Oncoming Clouds, is an urgent last breath of a song about a relationship ending—but it’s transfixing. This last year has found him releasing two new singles and touring extensively through Australia, Canada and the U.S., and the new work indicates more good from West. Although an opener for his SLC stop is still to be announced, it wouldn’t be a problem to spend a night filled with West’s work only. Transfixing as it is listening through speakers, one can tell he’s the kind of artist whose live performance would take hold of you and not let go. (Erin Moore) Soundwell, 149 W. 200 South, 7 p.m., $10, 21+, soundwellslc.com

SATURDAY 10/26
8th Annual Halloween Bash and Woodstock 50th Anniversary Tribute w/ Talia Keys & The Love
Call it nostalgia with some nuance, or Halloween added to happenstance. Multi-talented local favorite Talia Keys and her ensemble The Love spread some love of their own with a dual celebration, marking their eighth annual Halloween Bash as well as a tribute to the 50th anniversary of Woodstock. No, artists who originally graced that legendary festival won’t be at this event, but the music they shared will. Keys and company will replay the songs of Jimi Hendrix, Crosby, Stills and Nash, Jefferson Airplane, Janis Joplin, the Grateful Dead, Joe Cocker and other vintage artists who made that farm in upstate New York a sacred space during its gathering of the tribes. Of course, given Woodstock’s significance, it’s a heady responsibility to not only recreate the tunes, but those good vibes as well. Happily, Keys is well up to the task. For the past decade, she’s not only won well-deserved kudos here at home, but has also shared her talents by touring tirelessly. As founder of Salt Lake’s Rock ‘n’ Roll Camp for Girls, she’s not only a remarkable multi-talented, multi-genre musician, but a highly visible social advocate as well. It’s appropriate, then, that she’s the one to convey not only those seminal sounds, but also the peace and harmony that accompany them. And given that this event also coincides with Halloween, that becomes one of the treats making it so sweet. (Lee Zimmerman) The State Room, 638 S. State, 9 p.m., $20, 21+, thestateroompresents.com

SATURDAY 10/26
Justin Townes Earle, Michigan Rattlers
There’s something to be said for inheriting the family genes. The son of Americana icon Steve Earle, Justin Townes Earle (his middle name also nods to the late great Townes Van Zandt, natch) did just that, which in turn became the basis for his own artistic efforts. That’s evidenced yet again by his latest album, The Saint of Lost Causes, his eighth release to date. Sadly, there were less fortunate traits which were apparently passed down as well—substance abuse and an insurgent attitude, among them. Nevertheless, the younger Earle overcame that reckless legacy while achieving any number of career kudos as he made personal progress. Now happily married and a father for the first time, he’s headlining festivals, making strides to stay clean and healthy, and working to keep a connection with his father, with whom he’s had a difficult relationship over the years. Yet even in the midst of a sometimes troubled trajectory, he refuses to compromise. His music reflects the marked maturity of a man, who at age 37, embraces rugged reflection and intimate observation in a new album that details the challenges and turmoil faced by those relegated to the frayed edges of society. In Salt Lake City, Earle finds a nice niche; his wife Jenn Marie once owned a yoga studio here, which really makes him an honorary homeboy of sorts. Perhaps it’s simply another case of family ties playing into his destiny. (LZ) The Commonwealth Room, 195 W. 2100 South, 8 p.m., 21+, $32–$50, thecommonwealthroom.com 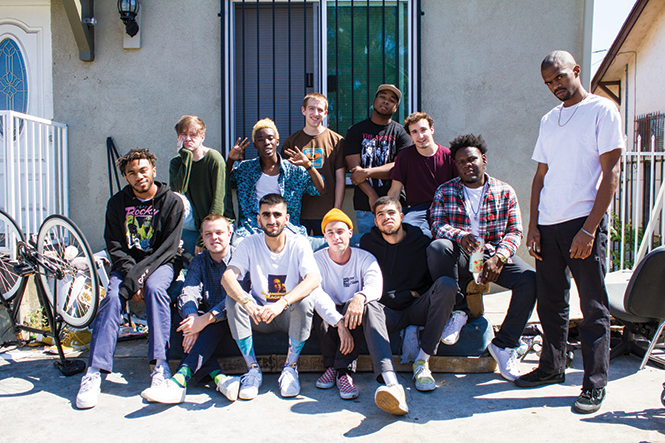 WEDNESDAY 10/30
Brockhampton, 100 gecs
When the internet smorgasbord sound of 100 gecs’ first, near-eponymous album, 1000 gecs, knocked me on my ass this summer, the last thing I expected to hear was that they’d be opening for Brockhampton’s “Heaven Belongs to You” tour. Brockhampton’s 2019 release Ginger follows 2018’s Iridescence, and the boy band’s versatility, their ability to feel intimate across the dozen-ish personalities who make up the collective, is as strong as ever. The album art, featuring founding member Joba and creative team member, Wes, hugging, is tender in a way that’s emblematic of the emotional texture of Ginger, Brockhampton’s personal history and even of the movement in pop culture toward a radical reconsideration of masculinity’s sense of intimacy and identity. The indie DIY rap group have contributed to this shift in sharp ways, like when they broke off from abuser and founding member Ameer Vann in 2018, but also in softer ways—songs like “San Marcos” demand more from this world, while “Loophole” prods at success in friendship. Brockhampton is agile but not supple, responsive but principled. Their sound hasn’t evolved per se with Ginger, but it has delivered on the Brockhampton signature of featuring a range of tracks that feel like car-windows-down bumps (“If You Pray Right”) and under-the-covers contemplations (“Big Boy”). At first blush, touring with 100 gecs seems as abrasive a move as 100 gecs’ music itself, but when you think about Brockhampton tracks like “Boogie” from 2017’s Saturation III, 100 gecs’ assaulting, nightcore-infected sound meshes into a distressingly tasty ice-cream swirl. (PSM) The Union Event Center, 235 N. 500 West, 7 p.m., all ages, $39.95 presale, $45-$95 day of show, theunioneventcenter.com