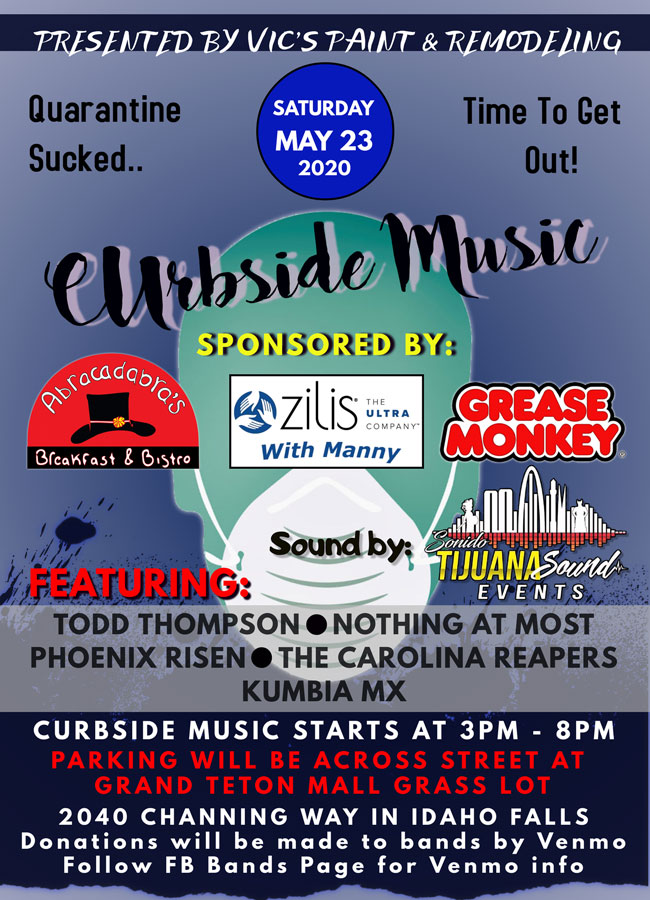 IDAHO FALLS — After weeks of quarantine, many eastern Idahoans are craving live entertainment, and some local businesses are stepping up.

Vic’s Paint and Remodeling, Zilis with Manny, Abracadabra’s and Grease Monkey are co-sponsoring a curbside concert for locals to drive up, park, and listen to live music while staying safe inside their vehicles.

Event promoter Manny Ibarra said this is his way to help the community.

“I was just sitting and watching TV and thought ‘I wish someone had a concert on, this is boring.’” Ibarra said. “Let’s do car curbside music.”

The event will be held from 3 p.m. to 8 p.m. Saturday. The bands will play in the parking lots of Abracadabras and Grease Monkey at 2040 Channing Way. The public is encouraged to park their vehicles across the street in the Grand Teton Mall parking lot. There will be a section where the public can bring lawn chairs, though sponsors encourage social distancing protocols of having groups of 10 or under be separated by other groups by 6 feet. Food will be available for purchase from Park Avenue Grill Taco Stand and Abracadabra’s.

The concert, which will be a mixture of rock styles, is family-friendly. Bands that are performing include Nothing At Most, Todd Thompson, Phoenix Risen, and the Caroline Reapers.

The event is free, but donations can be made to the individual bands through their Venmo accounts:

Todd Thompson will be giving his donations to The Giving Cupboard. Cash donations will be accepted at the event by Ibarra at the event.