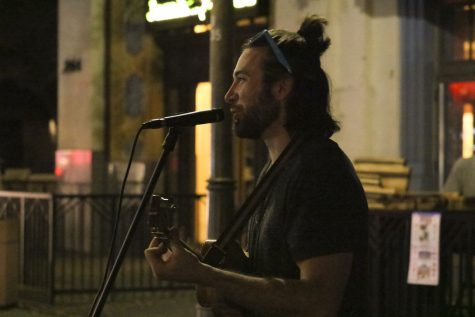 The section of Broadway Street between 2nd street and 5th street sees all kinds of people gather for the Thursday Night Market. It welcomes families, students, Chico locals, and out-of-towners.

From this pool of market goers, the Thursday Night Market’s street musicians seem to garner much of the attention.

These musicians add to the market’s charm and their performances go to show that talent comes from all backgrounds.

“I came to visit Chico, met all the hippies here, and was like ‘Oh this is cool!’”

Passing by Kolton Cutler, you’ll catch a glimpse of indie rock, either strummed passionately on his ukulele or played sweetly on his keyboard. The young musician has played trumpet since the fifth grade but didn’t get introduced to his current instruments until early high school.

“I went into the band room found a piano and was like ‘what’s this?’” Cutler said.

He likes the ukulele because of its small size, which makes it easy to travel with, but considers it his secondary instrument behind the piano. Cutler is currently pursuing a music career and is recording his first album.

Cutler grew up in Greenville, which is part of Plumas County. He went to college at California State University, Long Beach for two years. He then transferred to Chico State to finish his degree, graduating in 2018.

It was only in the last two years that Cutler started performing. He had been considering a career in media arts until he realized music was his calling. He said his next step will be to move to a bigger city.

“I would say to other street performers, ‘keep going’,” Cutler said. “Don’t give up. Play for your own heart.” 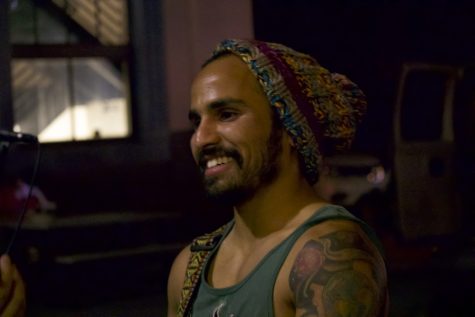 Sanjay Mallipudi was happy to talk to locals about his passion and love for music. Photo credit: Mary Vogel

“Yeah, I’ll interview. Hey, you got a lighter?”

Mallipud’s primary instrument is his electric guitar, but he loves all stringed instruments. He also plays mandolin and banjo, but not as much.

“I just kind of fake it,” he said about his music-making.

He set up on a street corner with his case open for donations until Cutler came over and suggested they play together.

They played several blues pieces – Mallipudi on guitar and Cutler on keyboard. 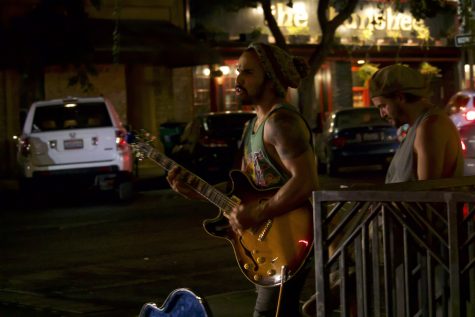 Originally from Chico, Mallipudi now lives in Ocean Beach where he plays with several bands. Playing at the Thursday Night Market was one stop on a two-week trip that he is taking to the redwoods in Arcata.

“The truth of the story is: I wanted to get out,” Mallipudi said. “I needed a break from the metropolis, so I decided to stop in my old stomping grounds, which is here.”

“Let’s put it this way. If you add us all together, we have more than two hundred years of music experience between us.”

Soul Posse took the stage in the downtown plaza and played a genre they call “American music” which includes rock, R&B and folk. Crowds of families sat and watched or stood and danced in front of the stage.

Soul Posse band members include Sugar on keytar, Andrew Wong on guitar, Rev on harmonica and spoons, Will Fowler on saxophone, tambourine and cow bell, and Rich Braley on drums.

They met at the Italian Garden in Paradise where they each used to play shows on Tuesday nights. When some of them lost band members they decided to form a new group together. They have been playing together for over two years now.

The band is in a state of healing since last year’s fire in Paradise. The Italian Garden was one of the many buildings lost during the Camp Fire. Band members Sugar and her spouse Rev lost their house and several instruments during the fire.

“Not to mention, we lost five gigs a month in Paradise,” Sugar said.

The band played Thursday night in support of Abilities & Possibilities, a program that offers support to special needs members of the community. Soul Posse’s act followed an ARC band and a special needs choir.

For losing five gigs a month, the band continues to stay busy. They have a lot of shows coming up in town. Find Soul Posse on Facebook to learn more.

Emily Neria can be reached at [email protected]