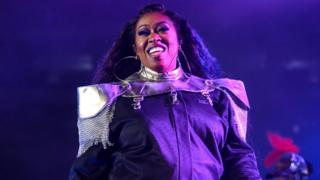 Missy Elliott released her debut single The Rain in 1997

Missy Elliott is almost as well known for her groundbreaking music videos as she is for the songs they accompany.

The rapper, whose real name is Melissa Elliott, is set to receive a prestigious award in recognition of her innovative music videos over the last 25 years.

She will take home the Video Vanguard Award at the MTV VMAs, which has previously gone to Janet Jackson, Beyonce, Kanye West, Pink, Jennifer Lopez and Michael Jackson, who the prize is named after.

For her fans, who have been campaigning for her to receive the Vanguard for several years, the acknowledgement is long overdue.

“Her presence as a full-figured black woman bursting with creativity was the kind of representation I needed growing up,” says Leah Sinclair, online editor at The Voice. “I’m sure many little girls like me looked on in awe to see her style, charisma and talent ooze off the screen.

“She embraced the weird and the wonderful, which was a rarity among her equally talented but hyper-sexualised peers.”

Elliott went through a particularly successful period in the late 1990s and early 00s, with a positive and playful brand of hip-hop, blending her often humorous lyrics with razor-sharp beats, which she co-produced with her long-term collaborator Timbaland.

She becomes the first female rapper to win the prize. Slate, the pop culture website, has even called for the award to be renamed after her instead of Michael Jackson, who was accused of sexual abuse earlier this year in the documentary Leaving Neverland.

“When you watch a Missy Elliott video, you know you’re going to get standout looks,” wrote J’na Jefferson in Vibe in an article last year which argued she should have been recognised by MTV long ago. “She has continued to wow us with over-the-top, yet always en vogue style and make-up.”

We couldn’t possibly rattle through all Missy’s videos and outfits here, so here’s a select few of the videos, outfits and concepts that have helped secure her the Vanguard prize.

Singing in The Rain

Missy’s debut single – The Rain (Supa Dupa Fly) – was released in 1997, and the song’s accompanying video played a key part in making the music industry sit up and take notice.

Fortunately, Missy found her own solution for overcoming the bad weather she was rapping about, thanks to the huge shiny black waterproof jumpsuit she wore in the video.

“The fashion and beauty choices within this video were a love letter to classic 90s beauty trends… with a Missy twist,” wrote Samantha Callender in Essence.

It marked the start of an important relationship with fashion, which has continued throughout Missy’s musical career.

The Rain also featured “plenty of what would come to be staples of Missy’s videos: trippy visuals (including her weirdly-distorted lips and eyes) and a smattering of celebrity cameos,” noted Daniel Welsh in the Huffington Post.

Anyone who has lasted as long as Missy has in the music industry would need a good head on their shoulders. And Elliott is such a big fan of her own head, she often removes it from the rest of her body and inflates it, dances with it or juggles it.

The computer trickery has helped her when she just can’t let her body stay in one piece. Writing about One Minute Man, Billboard’s Brian Josephs said: “The Missy-led lobby choreography is crisp, but the video pushes into classic territory when she plops her head and her body starts dancing anyways. The song’s guest [Trina and Ludacris] are at home within the ensuing weirdness.”

Similarly, Lose Control saw her head memorably appear above sand, under which the rest of her body was submerged, while Get Ur Freak On also saw her head depart her body to sing the second verse.

Missy Elliott’s memorable music videos aren’t constrained to her own songs – often they have extended to her collaborations with other artists.

Spice Girl Melanie B’s debut solo single – 1998’s I Want You Back – was a duet with Missy, who both produced and appeared on the record.

The creepy video was quite a departure from the light poppy style of the Spice Girls, with its green colour scheme and spiderweb-style backdrops.

It launched the career of Mel B as a solo entity – and with Missy’s help she became not only the first Spice Girl to release a solo song, but the first to reach number one without her four bandmates.

Missy Elliott’s 2003 album Under Construction was one of the most notable of her career, for several reasons.

It was the first since the death of her close friend Aaliyah, an R&B singer with whom she had often collaborated. As a result, the album in places had a more reflective and sombre tone, including an entire song about Aaliyah.

But those songs contrasted with tracks that were more positive and uplifting, harking back to 1980s hip-hop. The album was heavy on samples from that decade, and the music videos for the singles also reflected the fashion of the era.

One single – Gossip Folks – had Missy kitted out in an Adidas tracksuit (although the prominent logo has been blurred for YouTube).

Gossip Folks wasn’t even the biggest song from that album – as by the time it was released, lead single Work It had already become a worldwide smash, and remains one of her biggest hits to date.

The video for Work It showed Missy navigating a beehive one minute, while dancing in a deserted playground the next.

Her backing dancers all wore hoodies with the names of R&B and hip-hop artists who had died in recent years, including 2Pac, Big Pun and Lisa “Left-Eye” Lopez from TLC, while Missy’s own denim jacket paid tribute to Aaliyah.

Right up to the present day, Missy has continued to push the boundaries of what’s possible in a music video.

“She challenged the way women – in particular rappers – where perceived in videos, as she shunned bodyshamers and naysayers and explored beyond the realms of the typical music video,” Sinclair says.

The video for the recent I’m Better showed her dancing underwater, one of the many unusual locations Missy has chosen to perform her unique routines.

For her young fans, particularly in the late 1990s and early 2000s, her videos offered a glimpse into another – more interesting and colourful – world.

“A whole generation will never know what it feels like to get excited at the release of a new Missy Elliott video,” wrote Tom Breihan on Stereogum. That feeling, when you’ve got BET on in the background and you’re with friends and then you catch the video for Gossip Folks or Beep Me 911 for the first time and all conversation suddenly ceases.

“To see these vivid, surreal, funny images on an actual cable channel in daytime, it was like we were catching quick glimpses of a different, and better, universe.”