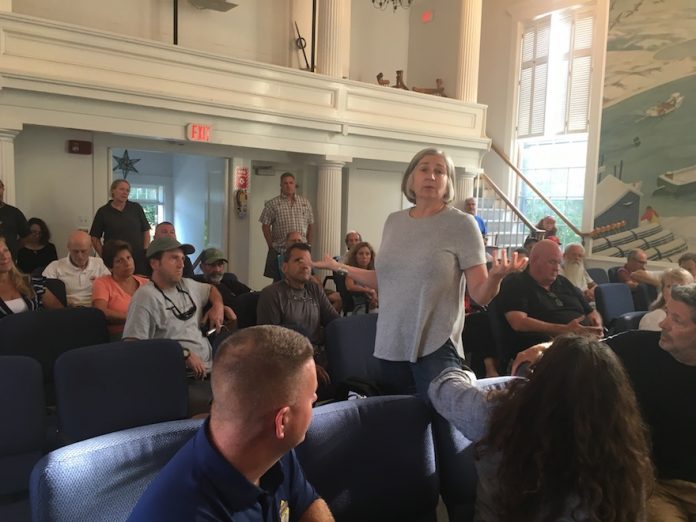 Holly MacKenzie of Tisbury was one of the many people speaking out in favor of Beach Road Weekend at selectmen Tuesday. “It was a wonderful event to attend,” she said. – George Brennan

After hearing a review from town department heads and input from more than a dozen people who used words like “awesome” and “fabulous” repeatedly, the Tisbury board of selectmen voted unanimously to approve a festival for next summer, with the date of the event up for negotiation.

Adam Epstein, CEO of Innovation Arts & Entertainment and promoter of Beach Road Weekend, was not at the board’s meeting, and could not immediately be reached for comment. The three-day festival featured an outdoor showing of “Jaws” with the Cape Cod Symphony playing the score, and two days of concerts headlined by John Fogerty and Phil Lesh and Friends.

The crowd at Katharine Cornell Theater Tuesday was gushing about the August 9-11 festival at Veterans Memorial Park. The only blemish was the final condition of the field, but that damage was caused as a result of rain after the concerts, Kirk Metell, the town’s director of public works, said. Epstein paid to have top soil and grass seed spread, Metell said.

The town received $40,000 for the park rental and Epstein has paid for $31,000 of an anticipated $33,000 in bills to pay town employees like police and fire, town administrator Jay Grande said. The town is still holding the $25,000 deposit Epstein put up for the field to make sure there are no unpaid bills, Grande said.

“By all accounts, the weekend was a success,” Tisbury Police Sgt. Bill Brigham said. “There were zero arrests during the concert.” Three people were taken into protective custody for public drunkenness, but only one of them was ever in the concert venue, Brigham said.

Brigham did suggest a need for more portable lighting in the future, and the need to set aside more handicapped parking spaces closer to the venue. “Overall it was a success. Everybody was happy. Patrons were happy. It really went without a hitch.”

Fire Chief John Schilling and EMS Coordinator Tracey Jones agreed. Jones got a chuckle when she said the First Aid tent had to double as a changing station for babies.

Teresa Kruszewski, who owns a gallery on Beach Road Extension, was one of several business owners who mentioned an uptick in sales. Kruszewski suggested making Lagoon Pond Road one-way during the event, and not allowing parking on Beach Road Extension, to turn it into a pedestrian mall. The police presence worked so well at Five Corners, she said, the town should consider making it permanent in the summer.

“I love the business and foot traffic,” she said. “It was one of my best weekends as a business owner, so thank you.”

Bobby Breth, owner of Bobby B’s Pizza, said he also had a good weekend of sales, but it was the atmosphere that most impressed him and his staff. “They said the customers were so polite all day,” he said. “It was amazing. There was no trouble. There were no riots. They were happy. They came with that attitude and when they left on the boat at night, they were very gracious.”

Laura Beckham of Island Puff n’ Pass reported a record weekend of business. “It was such a great cultural event for Vineyard Haven, which seems like nothing ever happens in this town,” she said. “It was so fun to have so many people brought into our town. What a great location to have it in — right near the ferries. It was really easy for people who didn’t live here to get here.”

J.B. Blau, an Island restaurant owner who was the beer and wine vendor, praised coordination between vendors, the police, and security for the lack of problems with serving alcohol. “On Sunday we probably served perhaps more people than have ever been served in one spot on Martha’s Vineyard in one day. To hear that there were no arrests or problems speaks highly for everyone involved in this operation — from the bartenders to the police to everyone in between.”

Then he also got some laughs. “I just wanted to say thank you to everyone, particularly Island Puff n’ Pass for everyone being so relaxed,” Blau said.

Steve May, a resident of Causeway Street, which backs up to the park, said he was concerned ahead of the festival. “I think everyone did a perfect job managing all the traffic in and out of there … I would totally support doing this again.”

Melissa Clay, who worked the event, called it an exciting and amazing experience. “This should always be a part of Martha’s Vineyard going forward,” she said.

David Smith concurred. “It should come back. If anything, Vineyard Haven just needs to say yes to more things like this,” he said.

Sean McMahon of West Tisbury, one of the local musicians who got to perform on the Vineyard stage in between the featured acts, praised Epstein. “I’ve been to a lot of festivals over the years. Usually it takes a lot longer to make something happen … It’s really amazing. It’s a miracle that this festival happened as well as it did.”

“I get the gist,” selectmen chair Melinda Loberg said. “You liked it.”

It was selectman Jeff Kristal who urged his colleagues to act now so Epstein could begin securing acts for next summer. “Here’s a guy who [lost] a ton of money and he still wants to come back,” Kristal said.

While it was mostly a love fest, Seth Gambino, an unsuccessful candidate for selectman who was a vocal opponent of the festival, criticized Beach Road Weekend. Gambino cited the noise, vibrations, and suggested a tax abatement for abutters. “Do what you will, but when you can’t go into your own home and lock the doors and find peace, that’s going too far,” he said.

In other business, selectmen picked the final seven members of an 11-member natural resources committee. The committee combines other town boards like waterways, harborfront, and shellfish committees, which were disbanded.

Selectmen considered 12 people, letting those who were there provide some background on why they wanted to be on the committee, before choosing seven members. Tom Robinson, Amandine Hall, and David Hearn were selected unanimously. Sally Rizzo, Bill Sweeney, Jeff Canha, and John Kollett received two votes.

The natural resources committee will work with harbormaster John Crocker and shellfish constable Danielle Ewart to consider how to manage the harbor, Lake Tashmoo, and Lagoon Pond. Their first task will be to consider whether to push for a natural resources officer to oversee the fledgling department.

Loberg praised the talent that was available for the new committee. She said the process has been deliberate on purpose. “We will do everything we can in town to support this group. Having a natural resources department is a new thing for the Island. We really want it to succeed,” she said.

The board delayed action, once again, on a regional agreement on sheriff’s communications equipment. Town administrator Jay Grande was scheduled to meet with other administrators from across the Island Wednesday, and the board will vote on a final recommendation next Tuesday after Grande can consult with Police Chief Mark Saloio and Schilling.

Selectmen did approve the mission statement for the town’s energy committee, after a couple of tweaks that added selectman Jim Rogers’ suggestion that the committee review operations and maintenance of energy projects like the leased solar array on the town’s capped landfill.