A musical sensation and pioneer to the music industry in Guyana, Johnny Braff, died yesterday morning around 04:00 hrs at the Palms Geriatric Home. 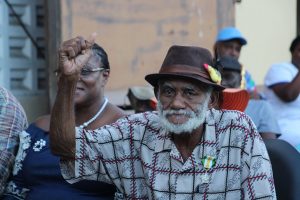 The Legend: Johnny Braff at his 82nd birthday celebrations

Braff. 82, was a resident of the institution for several months after being transferred from the Night Shelter, a decision that he often times didn’t seem too pleased about.
‘STOP THE MUSIC…IT BURNS INSIDE…’
If you don’t know those lines, if you don’t know that song, you would’ve missed out on one of the big hits of the 60’s and early 70s, when Braff was belting out love songs that made him both a household name and symbol in his homeland and abroad.
Braff shot to fame in the late 1960’s and 1970’s when he opened local shows for American artistes, on many occasions outshining the main act.
He recorded several hit songs locally and had them redone in the United States and Curacao, where they became more popular.
“It burns inside”, which begins with the catch phrase “Stop the Music, it burns inside”, was Braff’s most popular song as he sang about holding on to love and never letting it go. 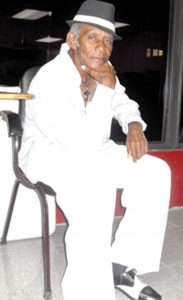 Johnny Braff in the offices of Kaieteur News a few years ago.

His real name was Johnny Critchlow, and he was born on July 3, 1937- the second to last of 14 children, living in Station Street, Kitty. But the large family was never in danger of starving.
From an early age, young Johnny showed an interest in music- entertaining and annoying his family by blowing on a comb wrapped in paper.
One of his first jobs was at the famous Tang’s Bakery, but he learned plumbing as a trade at Barry Massay in Queenstown.
He eventually became an A-class plumber, working in Mackenzie, Region10, for a number of years.
He got in the habit of singing at his workplace and hadn’t it been for a challenge from a colleague, the world might never have heard about ‘Johnny Braff.’
At around 19 years of age, he went on to form a singing group called ‘The Heartbreakers’ with local musicians Michael Bacchus, Dennis Coxwell, Cecil Whitehead, and Compton Edwards.
It was while performing at the Carib Hotel that the Guyanese group out-danced the legendary American singer Chubby Checker, who had popularized the dance known as ‘the twist.‘
That event made the headlines in the dailies. By then, the group was earning about $30.00 for each performance.
His big break came during a performance to a packed audience at the Astor Cinema. It was then that he first performed his compositions ‘It Burns Inside,’ and ‘A Shower of Tears,’ two of his first major hits.
In that audience was local businessman and producer Vivian Lee.
Lee was so impressed that he met with him afterwards and suggested that Critchlow record his two songs.
He would subsequently record ‘It Burns Inside’ at Radio Demerara, before re-recording it in the US.
A few of his other hits, including ‘A Shower of Tears’, ‘Same Time Same Place and ‘Anything You can Do’ were recorded in the US and in Curacao.
At the peak of his career, the songs of the now-rechristened Johnny Braff were played almost daily on the radio.
Braff signed a contract with Vivian Lee, which allowed him to perform in America.
He also sang with Percy Sledge in Barbados.
Sadly, a scheduled tour with legendary soul singer Otis Redding never came off after the American and his band died in a plane crash.
Johnny Braff then signed a six-year contract to sing on a Yugoslavian cruise ship, earning US$5,000 a month.
Of course, there were his female fans. At the peak of his fame, Johnny Braff claims to have fathered at least 27 children in at least 10 countries.
Braff has received several awards for his contribution to music, including the Guyana Folk Festival 2002 Wordsworth McAndrew Award.
In July, Braff celebrated his 82nd birthday and was feted by the Ministry of Social Protection at a special concert held in his honour. Back in May of this year, he was awarded a national award, the Medal of Service, by President David Granger.