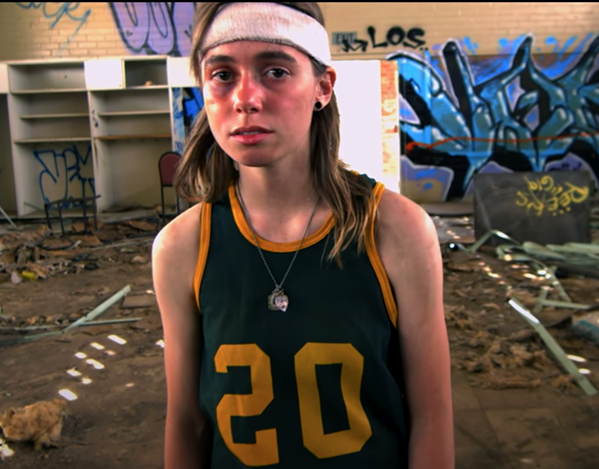 Along with his Music Issue cover story about Memphis musicians coping with the pandemic, Memphis Flyer music editor Alex Greene compiled a list of the twenty best Memphis albums of the 2010s. Julien Baker’s 2017 Matador album Turn Out The Lights made the cut.

Baker got her start playing pop punk in Midtown before going solo in 2014. This early video gave us a sense of her power. Alone in a cavernous parking garage, she easily fills up the space with just her guitar and voice. Notice that this video is a one-shot. It’s just her and director Breezy Lucia alone and live.

In 2015, director Sabyn Mayfield created this clip for “Sprained Ankle”, the title track for her first solo album. Around the same time, Baker was the subject of a Memphis Flyer cover story by Eileen Townsend: “If VH1 ever makes a Behind the Music: Julien Baker, it will play out something like this: A small girl with a big voice grows up in the far suburbs of Memphis. She works a night shift through high school, spends her free time hanging out at the skatepark; she smokes cigarettes, plays hymns at her small church, and figures out an electric guitar in her dad’s living room. She forms a punk band with her friends. They call themselves ‘The Star Killers’ and play all-ages shows in community centers and neighborhood pool houses. She gets a girlfriend, gets into drinking, gets some dumb tattoos. Starts touring when she isn’t in school. Applies herself. Makes it to state college, where she records a lonely record. The record is really good. People hear the record, share the record, and she gets signed. What’s next is history.”

Baker’s big break came with this spectacular performance on NPR’s Tiny Desk Concerts series, which turned a lot of heads.

Two years later, Baker recorded her second solo record, Turn Out The Lights, at Ardent Studios. This video by director Sophia Peer was shot in Memphis with a local crew that included Breezy Lucia, who had first introduced her to the world.

Baker toured extensively with Turn Out The Lights, playing to festival crowds all over the world. Here she is at last year’s Best Kept Secret festival in Belgium.

Baker found time to join her friends Phoebe Bridgers and Lucy Dacus in Boygenius, a supergroup of women singer-songwriters. Here they are at plying for Pitchfork in Brooklyn.

Baker’s latest song, “Tokyo”, came out on SubPop last October. She’s been doing livestreams on her Instagram account during the pandemic, and you might even catch her trying out a new song.