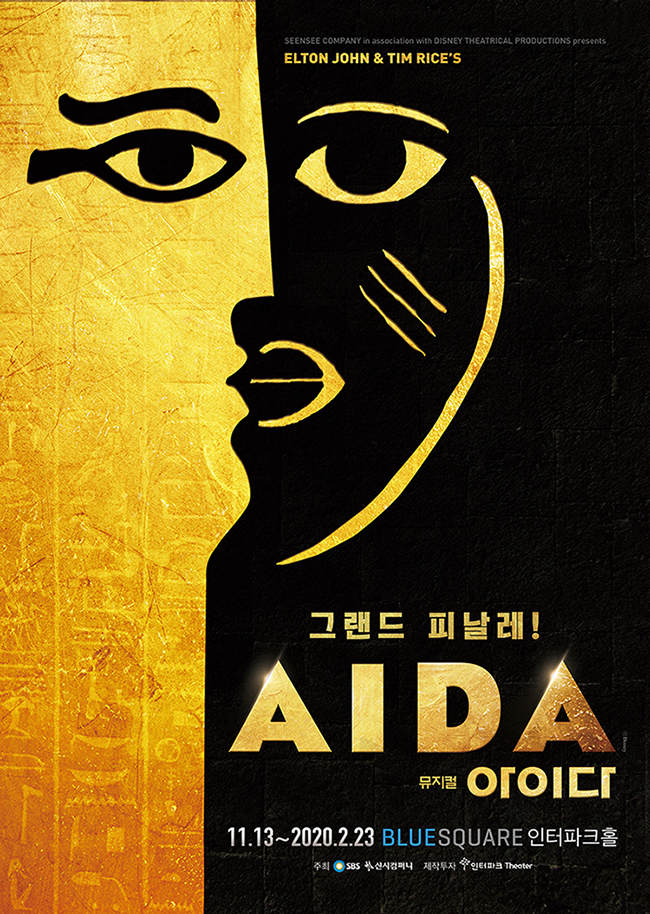 The final South Korean production of the beloved musical “Aida” will kick off next month, wrapping up a run that spans 732 performances, 14 years and 730,000 audience members.

The local promoter for “Aida,” the Seensee Company, said the musical will be performed Nov. 13 to Feb. 23, 2020, at the Blue Square Interpark Hall in central Seoul.

Yoon Gong-ju and Jeon Na-young have been cast as the title character and will appear along with other musical stars such as Kim Woo-hyung, Choi Jae-rim, Jeong Seon-ah and singer/actor Ivy. Yoon will be reprising the role she played in the 2016 production, while this marks the first time Jeon is playing the role.

The poster for the musical “Aida” (Seensee Company)

The show’s associate director Keith Batten, who has been involved since the first Korean production in 2005, expressed his confidence in the cast and was quoted as saying the actors are the most fitting people for the final production of “Aida.”

The musical, based on Giuseppe Verdi’s opera of the same name, tells the story of a Nubian princess, Aida, who is taken into slavery; an Egyptian general named Radames, who grows affectionate of her; and his fiancee, Egyptian princess Amneris.

It features music by Elton John and lyrics by Tim Rice, and was originally produced by Walt Disney Theatrical. It premiered on Broadway in 2000 and closed in 2004 after 1,852 performances.

It won four Tony Awards including one for best original score, while the original Broadway cast recording won a Grammy for best musical show album.

It was the first musical by Disney that was not based on a preexisting animation or film.

The show was first performed for Koreans in 2005 at the LG Arts Center, and was notable as the musical debut of former K-pop star Ock Joo-hyun, who is now one of the most popular and successful musical actors in the country. It went onstage again in 2010 — with Ock returning to reprise the role of Aida — and again in 2012-13 and 2016-17.