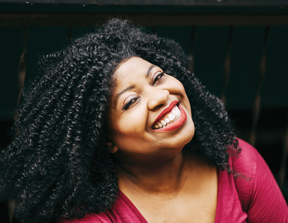 Civil rights, gospel music, racism, Jewish roots and generational upheaval — it’s all coming to the stage at the Spinning Tree Theatre with the production of “Caroline, Or Change.”

The musical story, set in 1963 Louisiana, chronicles a maid named Caroline and the relationship she fosters with an 8-year-old boy named Noah while working in the basement of the Gellman home. The show takes on the era of the Civil Rights Movement and what it meant for these characters from different cultural backgrounds as the Gellman family is Jewish and Caroline is black.

“It’s a coming together of religion and race,” said Michael Grayman-Parkhurst, the artistic director and co-founder of Spinning Tree Theatre. It will be presented at Spinning Tree Theatre’s new home at the Johnson County Arts and Heritage Center’s Black Box Theatre, located at 8788 Metcalf Ave. in Overland Park.

The play, which has graced stages on and off Broadway, was a favorite of Grayman-Parkhurst for years and has always been a priority to bring to Spinning Tree Theatre. He and his husband moved from New York City nine years ago with the goal of starting a community theater, and “Caroline, Or Change” came with them — including the New York-based actress playing the title character.

“It’s probably one of our favorite musicals,” said Grayman-Parkhurst, who is Jewish. “This was on our list from the beginning.”

The play and lyrics were written by Pulitzer Prize-winning Tony Kushner and serves as a semi-autobiographical piece about his life growing up as a southern Jewish person. The story takes place in the turbulent 1960s and finds themes that connect people from different backgrounds, while still being relevant today, according to Grayman-Parkhurst.

“[President John F. Kennedy] brought people together,” he said, referencing part of the play dealing with Kennedy’s assassination. “It didn’t matter what race you were.”

This is the first production of this play to take place in the Kansas City area, according to Grayman-Parkhurst, and it will be a new experience for many local theater-goers.

Ruth Baum Bigus, who plays the role of Grandma Gellman, says it’s an exciting production to bring to the stage. She said by playing Noah’s grandmother, she and the actor playing Grandpa Gellman, Evan Gamsu, who is also Jewish, get to interject some real-life generational themes through their portrayals.

“It is fun to play a Jewish grandmother, especially since I have not hit that point in my life,” Bigus said. “The Gellmans (the grandparents) bring historic context into this story of a family dealing with radical changes within their circle and in American society. It was a time when Jews and African-Americans joined arm in arm to fight for justice for all people. We continue to battle these same issues today. I am proud to be part of this beautiful piece of theatre and the power it brings.”

The play’s combination of music and dialogue is also a new undertaking for Bigus and offers an intriguing layer for her performance.

“The music is really interesting,” she said. A mixture of blues, gospel, Jewish klezmer and Motown tunes are a part of the musical fabric weaving the show together.

The layering of musical styles is “incredible,” according to Grayman-Parkhurst and because it is an intimate musical, he believes the size and audience experience at the Spinning Tree Theatre will be particularly fitting.

But perhaps more than anything, Bigus and Grayman-Parkhurst agree that the message about equal rights, societal change and coming together should be impactful for the audience.

“I think it’s a powerful story that has a lot of relevance even though it is set in 1963,” Bigus said. “You see the birth and desire of the civil rights movement in a personal way.”

Tickets can be purchased online at https://tickets.cto.umkc.edu/categories/spinning%20tree or by calling 816-235-6222. The show will run from Nov. 8-24 and a full list of times is available on the theater’s website at spinningtreetheatre.com. It is rated PG-13 and lasts about two hours with an intermission of 15 minutes, according to Spinning Tree Theatre’s website.