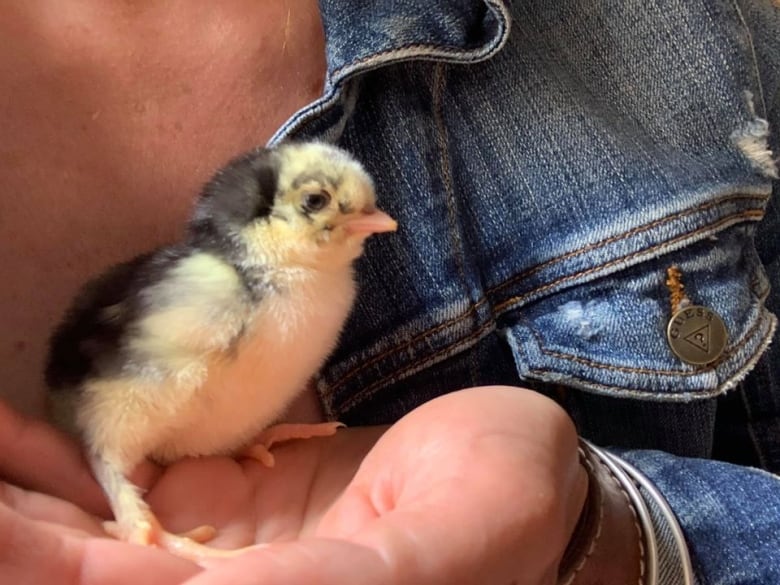 Her music career is on hold due to COVID-19, but P.E.I. singer-songwriter Amanda Jackson has found a way to connect with a different kind of audience.

Every morning, Jackson takes a video from her backyard coop as she chats with her rooster and chickens and lets them out for their free range run.

Jackson started the Facebook posts a few weeks ago when one of her hens began to brood. She thought her nephew would be interested, since he loves hanging out with the chickens when he visits.

But she didn’t expect to hatch a whole new audience, and was surprised to be contacted by teachers as far away as Iqaluit who were using the videos as a homeschooling lesson during COVID-19.

“How could you stop when people tell you that they’re doing that, you know?” she said.

“It made me feel really nice. I’m home a lot, my music schedule’s cancelled for the year, my tour is cancelled and I like that everybody can see the chickens and the rooster, Johnny, and what they’re doing.”

So Jackson continued the videos with a more educational approach. She said there are plenty of teaching moments in the coop — including ones that are unscripted like last week when — cock-a-doodle-doo — Johnny made love to a hen with the camera rolling.

Without missing a beat, Jackson explained what was going on.

“It’s quick and I know it looks painful,” she said. “But those girls, you know, they just shake it off and they go on with their day.”

Jackson began making the videos a few weeks ago when one of her hens began to brood, and recently the eggs hatched. (Amanda Jackson/Facebook)

Johnny often has a starring role in the videos, where his “super-friendly” personality shines through.

“He’s just amazing,” Jackson said. “I don’t think most people realize how useful a rooster is with hanging out with chickens especially when they’re free ranging. He’s very important to keep them safe.”

But in her latest video, there were some new stars in the show. A few of the brooding hen’s eggs hatched and all eyes were on the chicks.

Jackson said she will do a few more posts “because the babies are just too cute not to” before taking a break.

She said several people have asked her to do at least a monthly update, and she said she likely will if it helps gives people a realistic view of what it’s like to keep chickens.

“Interestingly enough, the world is changing and a lot of people are thinking now of being more self-sufficient, planting gardens and having backyard chickens….