Since its genesis in May 1971, the Yoruba Singers has been nourishing the soul of Guyana’s music industry with its impressive vocals and unforgettable performances. 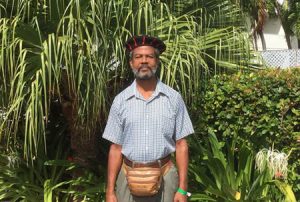 The late Derry Etkins, a revered Guyanese musician was one of the Yoruba Singers’ most beloved supporters

It stands today as the only band whose body of work is an outstanding embodiment of what it means to keep the African culture alive with passion and honour. The leader of the band, Mr. Eze Rockcliffe, said he is indeed overjoyed for having attained such a feat.
During an interview with Kaieteur News, Rockcliffe who is known for his exhilarating performances, said he is humbled by the fact that Yoruba Singers is Guyana’s longest surviving band while noting that he is proud of the legacy it is building with its current members, Joycelyn Rockcliffe (his wife), Herman Barnett, Kenneth Rockcliffe, Gordon Henry, Paul Barker, Peter Callender, Keron Richards, Earl Paul, and Xonephon Golliah.
Further to this, Rockcliffe noted that the recent celebration of the band’s 49th anniversary is truly significant for him as the band has been able to project its African culture through music. The singer said he is thrilled that the group was able to share these rich cultural experiences with all the races of Guyana and even beyond these shores. In this regard, Rockcliffe noted that the band performed at Madison Square Garden which he said is regarded as one of the epitomes of entertainment centres in the world. 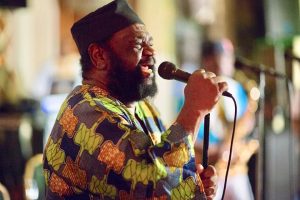 The Yoruba Singers lead singer said, “We were the only Guyanese group that ever performed at Madison Square Garden. In addition to that, we also attended three Carifestas: Jamaica-1976; Havanna, Cuba-1979; and Barbados-1981. We also took part in Carifestas in Guyana. One was in 1972 and the other was 2008.”
Upon reflection on the band’s work over the years, Rockcliffe said the experiences have surely been rewarding. He was keen to note however that the band could have flourished even more than it had at this point if only there was more support offered by the powers that be. His criticism in this regard was directed mainly to the Department of Culture.
“I could cite several instances where they showed that they lacked the presence of mind to project a cultural iconic masterpiece on more than one occasion. When we have our national celebrations, for example, most of the time, there is an exclusion of the Yoruba Singers. I don’t know if it is a lack of knowledge or oversight… But if they do their research, they would learn from stalwarts who used to control that Department and who ensured that Guyana’s folklore music was kept alive and well and was always present at national events,” Rockcliffe stated. 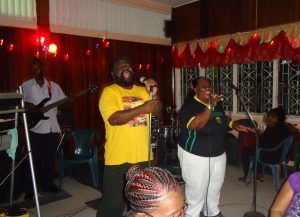 In this regard, he made reference to officials like Billy Pilgrim, Daphney Rogers, Francis Quamina Farrier, Vibert Cambridge, and Ken Cosby. These individuals he contended understood the power of culture as well as the importance of folklore music while noting that at the top of the list for such persons was the late L. F. S Burnham. The lead singer said that those who currently lead the Department of Culture do not have to look too far to understand how important it is for countries to support their own and how beneficial that turns out to be for the country in the long run.
“Our neighbour Trinidad and Tobago is a glorious example of this, just look at how Machel Montano has been supported and was able to contribute tremendously along with his other colleagues to the economy…In Jamaica, there are numerous superstars contributing to their economy,” the musical savant stated. Taking this into consideration, Rockcliffe said that there needs to be way more effort on the part of the Department of culture in helping Guyanese artists. 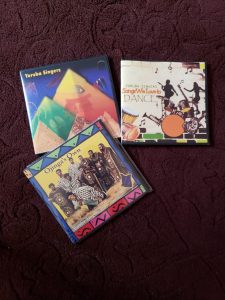 Three of the Yoruba Singers’ CDs which are available for purchase

In providing recommendations in this regard, the band leader said that the Department of Culture can start by creating a cultural database and including in its annual budget, packages to assist artists so that they can record and promote their music. He said that the department can also assist with the distribution of the recordings as well as having cultural exchanges with other countries for Guyana’s benefit. He said that such bilateral talks on culture took place during the Burnham era. Those efforts, Mr. Rockcliffe shared, were instrumental in paving the way for a group called the Chronicle Atlantic Symphony to travel the world and promote the Guyanese sound and culture. In addition to this, he said that the Burnham era also saw the establishment of the People’s Culture Corps. Rockcliffe said that this was a group of artists who travelled the length and breadth of Guyana doing concerts and so forth. They were also paid by the government for same.
Further to this, the Yoruba Singers’ leader said that the lack of support for musicians today makes it even more difficult for many to survive. He confidently stated that should there be a change in this state of affairs where the country’s artists are given the right environment that aids their development, more talented Guyanese would join the industry.
Rockcliffe said, “Right now, I would agree with sentiments that it feels like a thankless profession at times. The COVID-19 situation has highlighted that. Musicians are unable to make a living because of the travel restrictions and other measures in place. In such a circumstance, I think there should be some package, some kind of interim relief for our musicians and other members of the arts who are affected by this crisis. But they seem to be forgotten.”
In spite of the daunting state of affairs, Rockcliffe said he is still grateful for the band’s resilience and its achievements over the years. He was keen to note, however, that its success was not attained without the unwavering support of its supporters. One of the band’s most faithful followers was the late Derry Etkins who recently passed away.
On this front, Rockcliffe was quick to state that Etkins was indeed an outstanding musician. Rockcliffe described him as a noble person who always cared for other musicians. “I would even say he was an auxiliary member of the Yoruba singers. He started very young as a member of the Graduate’s Band, then he served in a group called the Tell Stars. He was also in the Queen’s College Sincom Band which I believe was the first band he was part of.”
Overall, Rockcliffe said Etkins was truly a highly qualified musician and an excellent music teacher who will not only be missed by the Yoruba Singers but the entire industry.
Even though the COVID-19 pandemic has affected its weekly work programme, the lead singer was keen to note that the band’s CDs such as Ojinga Zone, Fighting for Survival, A we like dem song dis, and a cover album called Songs we love to dance, are available for purchase. Persons desirous of filling their days with the hypnotizing and melodious sounds of the Yoruba Singers can uplift copies at Lot 90 Laluni Street, Georgetown. For more information you can make contact with Mr. Rockcliffe by calling 225-7714.