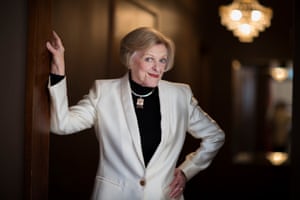 Nancye Hayes is such a legend of the Australian stage that she’s had a theatre named after her while she’s still alive. She’s fabled as the actor whose knock-out 1967 performance in Sweet Charity paved the way for Australian performers to star in the big musicals on their own shores. Over a career spanning six decades, Hayes has played a list of roles that would make any musical theatre graduate salivate: Charity in Sweet Charity, Roxie in Chicago, Mrs Lovett in Sweeney Todd and Madame Armfeldt in A Little Night Music, to name just a handful.

Now, the life of the grande dame of Australian musical theatre is becoming a musical itself. Hayes and a team of stage veterans she has been working with for decades have come together to tell her own story through song and dance.

On the day we meet in the theatre that bears her name, she is politely chatting with her team about the upcoming show. In stage blacks with her poker-straight posture, there’s no mistaking the 76-year-old is a dancer.

Hayes’ passion for dance began when she was a girl growing up in Manly, and was initially hampered by a growth on her hip as a child that meant she had to spend a year in a calliper, hidden under her overalls. As soon as it came off, she threw herself into learning dance.

She knew early on she wanted dancing to be her life but her mother wasn’t keen – they were from a “non-showbiz” family and her single mother had raised her alone after her father was killed in a car accident. So Hayes struck a deal.

For Hayes, getting her big break turned out to be a big challenge. Photograph: Jessica Hromas/The Guardian

“My mother wanted me to go and learn shorthand and typing, then do it for two years to prove I could earn a living doing that. Then I could start auditioning.”

She did exactly this, working for the Forestry Commission and auditioning on the side. It didn’t take too long for the young dancer to be booked in her first big show. After missing out on West Side Story and Bye Bye Birdie, she was cast in the chorus for My Fair Lady.

“It was so glamorous to be in a show like that,” Hayes says.

But getting her big break turned out to be a bigger challenge. Until the 60s, the lead roles in musical theatre productions in Australia had been played by actors imported from the UK or the US.

“JC Williamson’s [the major theatrical production company of the day] brought in The Pyjama Game, which they thought was going to be a filler, while they waited for the rights to My Fair Lady,” Hayes says. “They used an all-Australian cast including Toni Lamond and Jill Perryman – and it just took off! It was a big hit. It toured forever and they got a real surprise.”

A few years later Sweet Charity came to Australia. It would be Hayes’ big break and one that changed casting in Australia for good.

“The Sweet Charity record arrived and I played it and played it and studied it,” she says. “They were thinking they’d bring someone out for it – but producer Betty Pounder kept writing letters saying, ‘I really believe Nancye can do it.’”

The advocacy paid off. Hayes was cast and Sweet Charity was a hit, catapulting her to stardom. 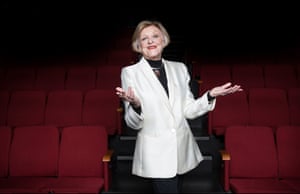 Nancye Hayes: ‘I still have to pinch myself whenever I hear someone say, “We’re off to the Hayes!”’ Photograph: Jessica Hromas/The Guardian

Hayes’ longtime collaborator and friend Todd McKenney says she is one of the true gems of Australian musical theatre, and admires both her work ethic and her sense of humour.

“She sings, dances, acts, directs, choreographs,” he says. “She is a hilarious comic and she mentors young performers. She does all these things with an air of class and ease.”

Hayes learned early that she’d need to diversify her practice to make a living as an artist in the extremely small Australian performing arts industry. As well as choreography and direction, she has performed in plays including MTC’s The Glass Menagerie, and a commercial production of Steel Magnolias (which was also Nicole Kidman’s stage debut). This diversification also helped in those wilderness years in which, with a scarcity of lead roles, the musical theatre oeuvre mostly forgets women between 35 and 60 years old.

Unlike many Australian performers, Hayes didn’t feel the need to make the move overseas to advance her career as she believed the standard of musical theatre in Australia matched that of West End or Broadway.

“It wasn’t something I craved,” she says. “I was doing good work here. I travelled a lot overseas, I saw the standard. I tried to maintain that standard … I knew I wanted to work in my own country.”

Hayes at the Hayes will see her performing on that eponymous stage solo for the first time.

“I still have to pinch myself whenever I hear someone say, ‘We’re off to the Hayes!’,” she says.

“Tony Sheldon has devised a lot of material for me and shaping songs so they fit the story I want to tell. The show is about this part of Sydney – Kings Cross – the way it was in the 60s, and I’ll be telling stories about my life. It’s like you’re in my lounge room.”