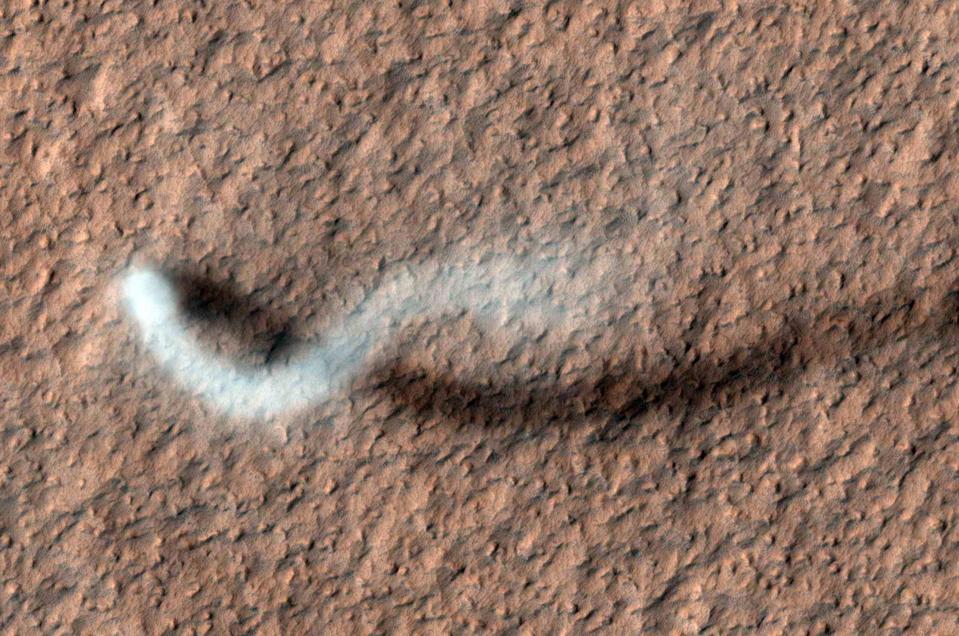 A dust devil snakes across Mars.

NASA’s InSight lander, the first robotic geophysicist on Mars, has been listening to the orchestral soundscape of the Red Planet for several hundred days now, attempting to ascertain what kind of geological music it prefers. It appears that the rust-hued marvel next door is less into classical or rock, but rather a strange sort of jazz. It sounds a little bit like Earth, and a tad like the moon, but so far, it is playing to an idiosyncratic tune of its own composure.

Ever since it picked up on its first marsquake back in April of this very year, InSight’s Seismic Experiment for Interior Structure (SEIS) instrument has been hearing all kinds of things, from the whirling of tornado-like dust devils sneaking across the surface, gusts of Martian wind, and even the pinging noises made by the expansion and contraction of its own nuts and bolts.

It has also, as you might expect, picked up on some bona fide marsquakes, which although limited in number are already beginning to reveal a little about the internal structure of Mars. Overall, the team have so far picked up on 100 seismic events, but only 21 are strongly considered to be marsquakes. The others have no set origin, but it is possible that some of them may be shakes caused by meteorites slamming into the surface.

We will have to wait a fair while before the first peer-reviewed studies on its operations are published, but over the past few weeks, a ream of preliminary data has begun to trickle out. Strange magnetic pulsations taking place at midnight, and the possible presence of a global layer of liquid water beneath the surface, understandably took the spotlight recently. But a recent press release by the InSight mission team, as well as a presentation at the joint meeting of the European Planetary Science Congress and the American Astronomical Society in Geneva, revealed a fair bit about Mars’ seismic shenanigans too.

Fantastically, quakes are definitely taking place on Mars. That was expected, but is nevertheless significant: Mars, geologically speaking, appears to be pretty dead, or at least long into the death process. Much of the primordial heat from its innards leaked out long ago, as did plenty of the heat generated by radioactive decay. It hasn’t entirely leaked out into space, but Mars, being 85 percent less voluminous than Earth, hasn’t managed to keep much of it trapped. That means that the heat engine that drives much of the rocky transmogrification at the surface, through volcanism, mountain making, basin building or energetic earthquakes, has spluttered out.

But that doesn’t mean that Mars can’t have quakes. A lack of active plate tectonics means that the most powerful quake types – those that occur when one tectonic plate dives beneath another – can never take place, but it is still able to rumble and growl.

The moon is geologically defunct, but, as revealed by now-inactive seismometers placed on the near side by the Apollo missions, it still has four different types of moonquakes. Its deep tremors are generated by the gravitational pull of Earth; some shakes are caused by meteorite impacts; others come about when the drastic temperature changes on an atmosphere-lacking realm caused expansion and contraction of the surface. Just recently, the mystery of its shallow moonquakes appears to have been solved: a combination of Earth’s gravity and a soupçon of internal heat still escaping out at the surface means that some young faults are still slipping and generating quakes.

Although less is known about the internal makeup of the Red Planet, Mars is likely to be in a similar scenario. Indeed, that’s why we want to hear as many marsquakes as possible: the deeper they occur and the further that take place away from InSight’s home in Elysium Planitia, the more they will reveal about the viscera of Mars.

An artist’s impression of how seismic waves may travel and bounce around Mars’ interior, the details of which remain foggy.

Seismic waves behave differently depending on the material they travel through, and we use them on Earth to ascertain what is happening underneath our feet. The same applies to Mars. If they travel from the other side of Mars to InSight, they will hint at the crust, mantle and core of the world as they make their journey through or around them.

InSight landed in December 2018, so it was odd – disappointing, even – that the first marsquake didn’t make an appearance until April. Even then, that was, as NASA itself notes, an “odd duck”: very high frequency compared to the other 20, far more bass-heavy marsquakes detected since then.

You can listen to two of these 20 marsquakes below, which have been sped up so that they can be heard by humans. The one on the 173rd day of the mission had a magnitude of around 3.7; the other, on the 235th day, came in at a magnitude 3.3.

The InSight team are keeping fairly schtum about the potential sources of these quakes and what they may reveal about the internal structure of Mars as they continue to gather data. But they have, rather intriguingly, hinted that the upper crust of Mars is a little bit of a halfway house between Earth and the moon.

The Earth has an ever-changing, geologically complex crust, whose intricacies can variably transmit and absorb seismic energy. Conversely, the moon’s volcanic crust is old and cold; seismic waves love to travel uninterrupted through this sort of rigid material, bouncing around all the cracks and crevasses without getting quickly soaked up by any water-bearing minerals or bodies of water. Unlike earthquakes, moonquakes can last for hours, with the entire pale orb ringing like a colossal bell.

Mars being somewhere in-between would make intuitive sense. It has lost plenty of internal heat, but nowhere near as much as Earth’s diminutive moon, so Mars is not a planetary corpse just yet. It has likely got plenty of pockets of water in the subsurface, as well as all kinds of as-of-yet unrevealed geological nooks and crannies that would influence the transmission of seismic waves through the surface in a currently unpredictable way.

The remarkable sensitivity of SEIS means that it picks up on other rumbles at the surface, including those caused by the wind, meteorite impacts, and dust devils. It also hears InSight’s arm movement too, as well as the metal components cooling down and heating up, a response to the local temperature change as Elysium Planitia moves between night and day.

You can hear, in the clip below, a series of temperature change-related dinks and doinks on the lander’s 226th day, just after the sun has set.

Hopefully, with plenty of marsquakes captured, the InSight team will be able to give Mars a decent CT scan. If they can, it will reveal just how different, or similar, Earth and Mars are. This will give us a paradigm-changing window into the evolution of these planetary siblings, as well as other rocky worlds within and without our solar system.

It is nothing short of a technological miracle that we can hear the percussion of an extraterrestrial geological orchestra, one playing hundreds of millions of miles from home. Hopefully, in time, scientists will be able to decrypt these medleys to find out where, exactly, the members of this orchestra are playing deep within the stony steps of Mars.