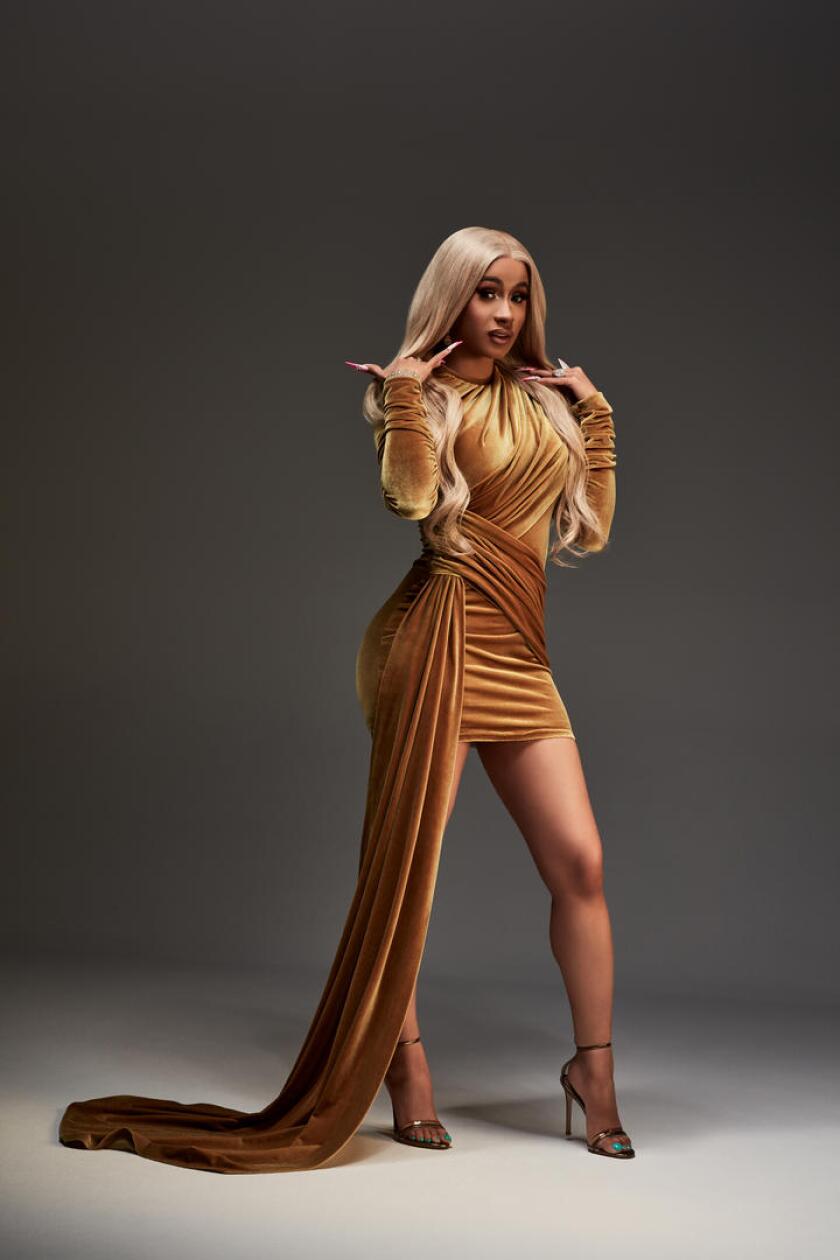 Like many viewers during the height of “American Idol” fever over a decade ago, Cardi B was glued to the TV, imagining what kind of judge she would be if tasked with critiquing aspiring performers.

“Everybody always wanted to be a judge on one of those judgey shows. You see Simon Cowell and you think, ‘I can do that,’” she says in her thick Bronx accent before letting out a sinister cackle and clinking together nude-painted fingernails far sharper than Cowell’s infamous shade.

Now, ahead of her anticipated sophomore record, Cardi, 26, is trying her hand at reality television judging alongside Chance the Rapper and Tip “T.I.” Harris on Netflix’s first foray into music-based competition shows, “Rhythm + Flow.”

“A lot of people wonder how was I going to judge a competition, because I’m so new,” Cardi says, “but I know a hit record when I hear one.” Her debut album, “Invasion of Privacy,” won in the rap category at the 2019 Grammy Awards and is still No. 51 on the Billboard 200 after 78 weeks on the chart. “There’s so many good rappers right now on Instagram, but they just don’t have star quality. I’m looking for that.”

The 10-episode series, which premieres Wednesday, follows the three judges as they search for rap talent in L.A., New York, Chicago and Atlanta.

“Rhythm + Flow” doesn’t come with the lofty promise of finding America’s next big superstar or a million-dollar prize for its contestants (the winner scores a six-figure cash award and a slot on Spotify’s Rap Caviar Live tour). As guest judge Snoop Dogg says on the premiere, albeit more profanely: “This ain’t ‘The Voice.’”

“I’d seen a million voice competition or talent competition shows that were broadcast in a certain kind of way. And that wasn’t something I was into,” admits Chance the Rapper, 26. “This was my chance to put my mark on [a talent competition] and see it through the way I would want to see one of these shows go.”

While the heyday of music-based competitions peaked in the pre-streaming, “You’re a little pitchy, dawg” aughts, network television still boasts weekly talent shows like the relaunched “American Idol” and “The Voice,” now in its 15th season, while regularly springing new variations and gimmicks, some successful (“The Masked Singer”), most less so (“Songland”).

For the producers of “Rhythm + Flow,” the desire to authentically document the often harsh realities of life that’s rooted in hip-hop and reflected in the music led them away from traditional television and to Netflix.

“Originally, we were going to take it to one of the big networks, and we actually did find a home for it there. But the big networks, no offense, could never capture that environment,” said Mike Jackson, a producer on the show through John Legend’s Get Lifted Film Co., which oversaw the show alongside Gaspin Media and Jesse Collins Entertainment. (The trio of judges also share producing credit on the series.)

“Netflix immediately got what we were trying to do. They saw the importance of a show like this and knew the impact it could have,” he continued. “But the idea of doing a music competition series on Netflix instantly means you have to change your game a little bit.”

The producers needed to rethink how to roll out an ambitious competition show on the streaming giant that single-handedly created binge-viewing culture. How do you create a Netflix show without allowing viewers to simply click on the final episode’s coronation, thus spoiling the reality-TV buildup and revealing the winner?

The solution was to package the 10 episodes into three chunks, to be released weekly. The first four episodes, available Wednesday, follow the judges as they audition talent in L.A. and in their respective home cities (Cardi in New York, Chance in Chicago and T.I. in Atlanta), with the help of guest judges. The following week, in episodes 5-7, the top 30 contestants are pared down through rap cyphers and battles, and judged off original music videos. And during the final three episodes, the rappers sample records and collaborate with artists to make original songs, and a winner is crowned.

“We aren’t trying to teach the contestants how to become famous,” explained Chance. “We wanted to show them how to deal with being an artist: How to have the right stage presence, or how to make a dope music video, or how to collaborate with people from other genres.”

Adding to the show’s cachet is a rich roster of hip-hop and R&B stars who were tapped to guide contestants. The late Nipsey Hussle is featured in the premiere, and there are appearances from Killer Mike, Fat Joe, Quavo, Anderson .Paak, Lupe Fiasco, Jadakiss, Ebro Darden, Big Boi, Miguel, Jhene Aiko, Tory Lanez, Ty Dolla Sign and DJ Khaled, among others.

Cardi B leads the star panel on Netflix’s “Rhythm & Flow.”

“Music competition series have been one of the most popular and beloved types of unscripted TV, but there has never been a competition show of this scale that has been focused on hip-hop before ‘Rhythm + Flow,’” said Brandon Riegg, Netflix’s vice president of nonfiction series. “We saw an opportunity to show fans an authentic look at the level of talent it takes to become Cardi B, Chance the Rapper and T.I.”

And yet rap has continued to be largely shunned from competition shows.

Netflix’s new series isn’t the first of its kind by any means. MTV buffs remember Puff Daddy famously making the rap group he assembled on 2002’s “Making the Band” hike across the Manhattan Bridge to get him a slice of cheesecake, and everyone from Jermaine Dupri to Missy Elliott to Rick Ross have toplined shows scouring the streets for rap talent.

Where “Rhythm + Flow” differs is in its ability to cater to today’s music ecosystem, which is why contestants aren’t locked into any restrictive record deals on this show. Producers wanted the show to serve as a platform for artists to gain exposure, which attracted both the artists who signed on to the series as well as the judges and the contestants.

“The music industry has changed so much,” said New York-based rapper Cakes Da Killa, who competed on the series. “When I started making music, Instagram wasn’t even a thing. I’d been approached to do other reality shows, but this show had a bigger heart. It was centralized on the art form and the craft of making music.”

We are like the Soundcloud of competition TV series,” added Jackson, “because we’re an independent platform for the artist. Obviously a label deal is a very significant thing for an artist, but Chance is a perfect example of there being a different path to success outside of the label system.”

Cardi and Chance, who made history as the first artist to win a Grammy from a streaming-only album, have found massive success in rap’s new era. However, the show’s elder statesman, T.I., now 39, came to hip-hop fame in the early aughts before building his own reality TV franchise with a series of shows, including VH1’s hit docuseries “T.I. & Tiny: The Family Hustle.”

“I only wanted to do the show if it maintained a significant level of authenticity,” T.I. said. “I didn’t want to do a show that was contrived and orchestrated. For me, this was about taking my experiences and using them to benefit the next generation. Once you’ve sold records, won Grammys, done tours and made money, you have to think about what you’re able to do for others.”

And there couldn’t be a better time for a show like “Rhythm + Flow.” No genre of music is as prevalent as hip-hop at the moment. In the U.S., 18 of the top 20 songs being streamed on Spotify right now are hip-hop. There isn’t a commitment beyond the first season, but everyone involved hopes this is the beginning of a new franchise.

“I didn’t do this for the money,” Cardi said. “I obviously got a bag for doing the show, but I just wanted to keep filming every single day. I was so excited to see what these contestants were going to come up with. I got so emotionally invested. I would do a record with a lot of them — especially the winner.”