Now you can talk to Alexa ANYWHERE: New $130 Amazon earbuds respond to voice commands for playing music, checking the weather and come with built-in noise reduction from BoseAmazon’s first-ever wireless earbuds will allow users to use Alexa on the goThe Echo Earbuds are set to be shipped later this year and will cost $129.99Alexa is activated with voice commands to play music, check weather, etc… Bose also integrated a noise-reduction algorithm to help block external sound Fitness tracking will not be part of the gadget despite prior reports

Amid a torrent of new product releases on Wednesday, Amazon announced a company-first: a set of voice-activated wireless earbuds.

The Echo Earbuds, as Amazon is calling the new device, will be released later this year starting at $129.99, and will act as a direct competitor to other popular products like Apple’s AirPods which currently cost $160.

One of the most notable features will be their integration with Alexa, Amazon’s voice assistant.

This allows users to use their voice to execute several commands. Essentially anything that one can do with Amazon’s Echo smart speaker can be done with the earbuds, including playing music, checking the weather, and more.

The next biggest selling point is undoubtedly the headphones’ noise-reduction feature which uses algorithms developed by Bose to block external sound.

To activate the feature, the buds can be double-tapped and again to turn the feature off.

This technology will also help the device understand a user’s command amid any ambient noise that may be happening in one’s environment.

‘Each earbud has two outer microphones and one inner microphone that work together to reduce ambient noise so Alexa can hear you whether you’re walking to class, on your lunch break, or commuting home on the train,’ said the company in a release.

‘All you have to do is ask to hear your favorite playlist, find the nearest coffee shop, or order an.’

Amazon says the buds boast a five-hour battery life and charge via a mini-USB. That life can be extended to 20 hours with an included case – one that is notably larger than a container that comes with Apple’s AirPods.

As noted by The Verge’s Dieter Bohn, the use of micro-USB instead of USB-C could eventually become a problem for first-generation buds if the connection continues to phase out. 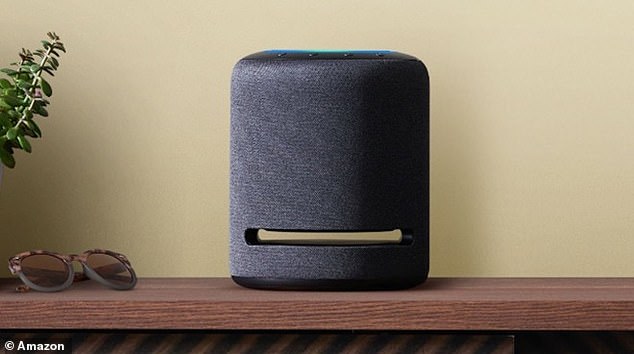 The first-ever high-end smart speaker from Amazon, called the Echo Studio (pictured above) was also announced on Wednesday and is being positioned as a companion for the company’s HD streaming service

With the Echo Earbuds, Amazon will also further its new interoperability initiative that aims to integrate other voice-assistants from different tech companies into its own devices.

Amazon says that the buds will be ready and able to use both Siri and Google Assistant to carry out voice commands.

Users are able to initiate the assistant on their phone – whether it be Siri or Google Assistant – by using the earbuds’ button to execute a ‘long push’ – a press and hold.

One thing that the buds won’t do, despite prior reports, is act as the company’s first fitness wearable.

Reports prior to the hardware event on Wednesday speculated that the buds would also double as a fitness tracker that was capable of clocking run speeds, burned calories, distance, and more.