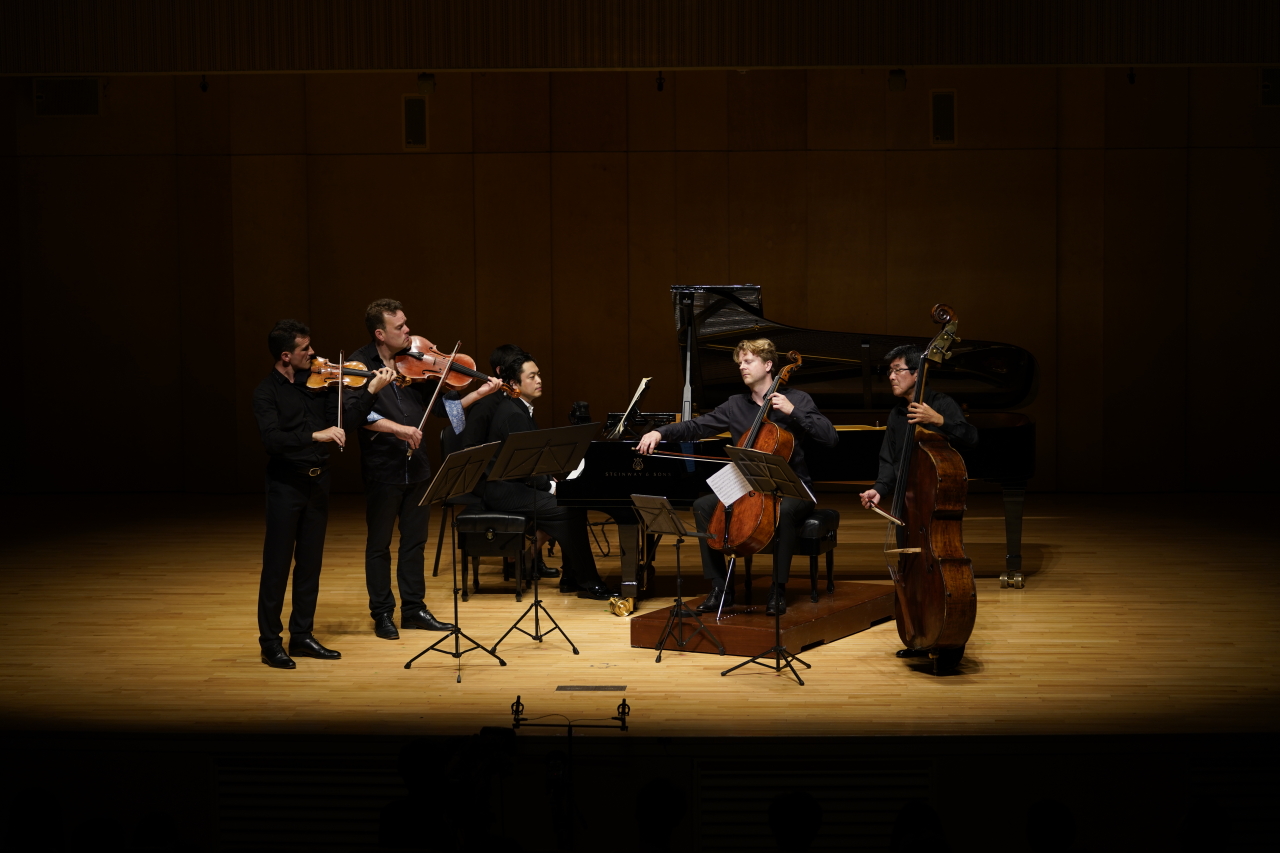 PYEONGCHANG, Gangwon Province — A two-hour drive from Seoul, PyeongChang is widely known as a Winter Olympics host city filled with ski slopes, rental shops and resorts. But this week PyeongChang got a sudden infusion of classical music.

“A Different Story,” the 16th Music in PyeongChang event also known as the Great Mountains Music Festival, kicked off Wednesday and will continue until Aug. 10.

Located 700 meters above sea level in PyeongChang, the Alpensia Resort welcomed visitors with cool wind — a refreshing getaway from the blistering heat of Seoul. The venue, surrounded by the lush forests of Gangwon Province, was filled with festivalgoers and families on summer vacation.

Commencing the festivities, Wednesday’s main concert, “Once Upon a Time,” played 2 1/2 hours and set a pastoral mood.

Flutist Cho Sung-hyun, oboist Ham Kyeong and clarinetist Kim Han were the first to perform, presenting Rodion Shchedrin’s “Three Shepherds.” In a dimly lit concert hall, the three musicians entered and exited the stage while playing their instruments. The wind music performance, however, may have been too experimental for the audience, where some uneasy murmurs could be heard.

Following “Three Shepherds” was Maurice Ravel’s “Mother Goose” suite performed by pianists Kim Sun-wook and Son Yeol-eum. Son has been the artistic director of the festival since 2018.

Amid the ensemble of string instruments, Kim’s stable, composed piano performance stood out. The piano effectively backed the other instruments while adding something special too.

On Thursday, an outreach concert was held at the DMZ Museum in Goseong, Gangwon Province, a coastal city near PyeongChang. Outreach concerts are free of charge and held for the benefit of local residents, who do not have many opportunities to enjoy live classical music.

Cellist Leonard Elschenbroich and pianist Alexei Grynyuk took the stage, presenting Ludwig van Beethoven’s Sonata for Piano and Cello No. 3 in A major, No. 4 in C major and No. 5 in D major.

There’s still more to look forward to at Music in PyeongChang. More concerts are to follow, and these will be presented like a collection of short stories. They include “Told, Untold,” “Bohemian Rhapsody” and “Alice in Wonderland.” The finale, “Happily Ever After,” will wrap up the festival Aug. 10.

Also, apart from the main concerts, there will be outreach concerts across Gangwon Province, as well as special concerts and master classes.

Originally launched in 2004 to promote the PyeongChang Olympics, the festival is organized by the Gangwon Art & Culture Foundation. The biannual music festival holds summer and winter concerts. With two annual editions, the music festivals introduce classical music to a wider audience.