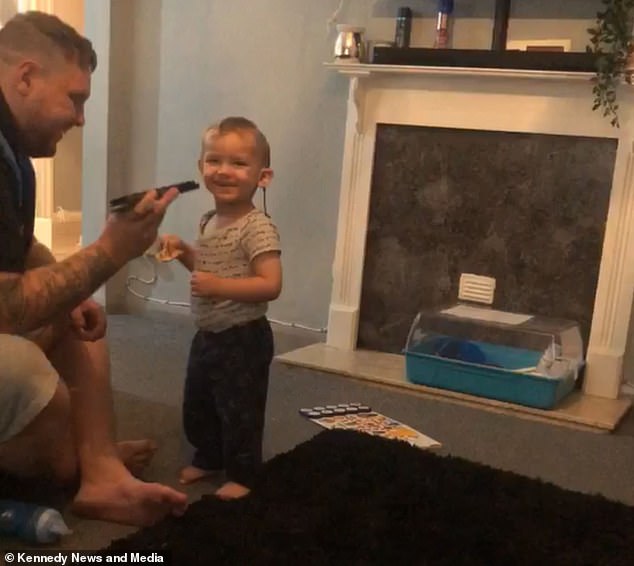 This is the adorable moment a one-year-old deaf boy beamed with joy as he heard music for the first time.

Teddy Shotter, from Portsmouth, bounced around his living room to the tune after having cochlear implants fitted last week.

The devices essentially send electrical signals to the auditory nerve, which is responsible for carrying sounds to the brain.

He swayed from side to side and pressed his ear closer to the speakers to hear it better as his father Ben, 25, played music through his phone.

Little Teddy Shotter, from Portsmouth, beams with joy as he hears music for the first time 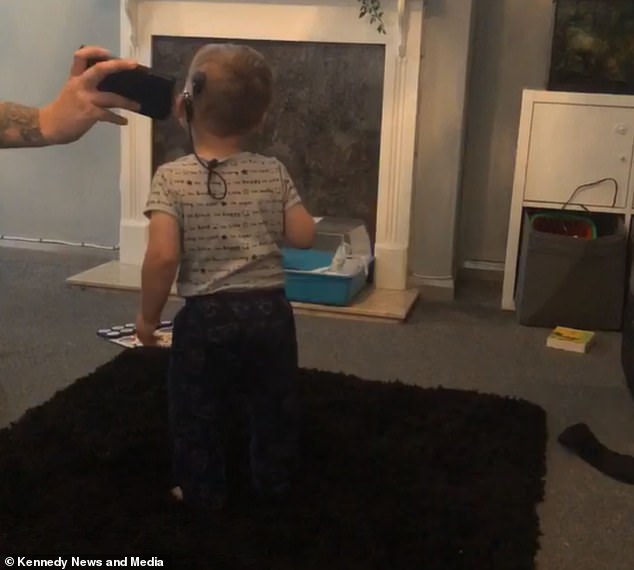 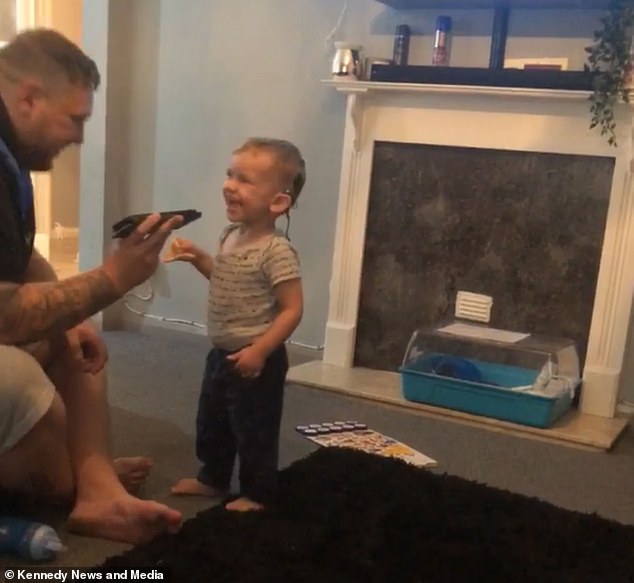 He smirks at his father Ben before bouncing around the room, swaying from side to side

Teddy’s mother Beth, 24, was overcome with emotion as she watched her little boy enjoy music – something she thought he’d never be able to experience.

She said: ‘I cried watching him. We’ve played music to him in the car and he’s sort of looked at me and points at his ear as if to say he can hear something – but this is the first time he’s properly recognised music and danced to it.

‘Before I would be dancing and he would be looking at me like, ‘what are you doing’ but now he can understand.

‘At the moment he can’t hear like we do, but it [the hearing aid] was on programme one when we first got it and on Sunday we turned it up to three.

‘When we turned the music off he would stop and cry because he wanted it back on. He obviously likes music like his parents.’ 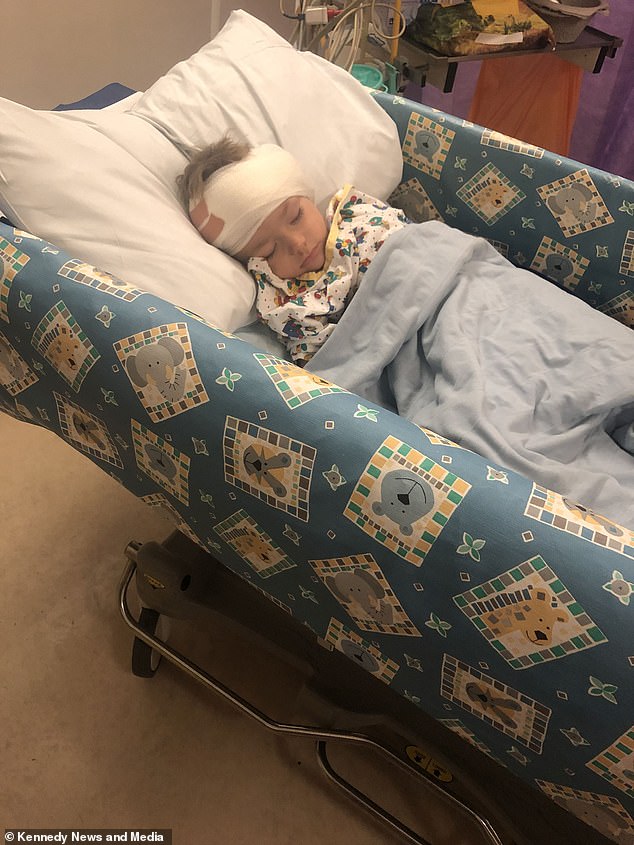 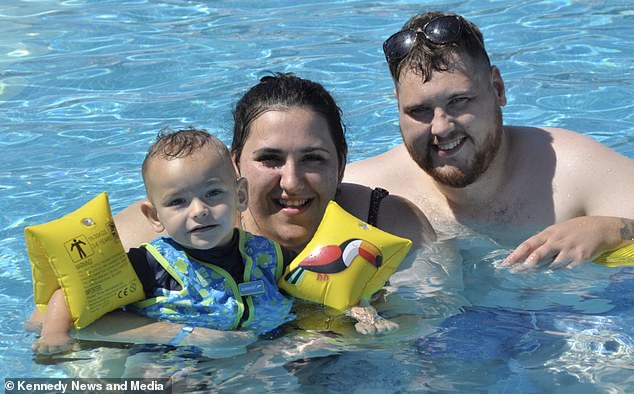 His parents had to decide whether to fit him with cochlear implants, which would dramatically improve his hearing, but also increase his risk of meningitis. Pictured: Teddy on holiday with mother Beth, 24, and father Ben, 25, 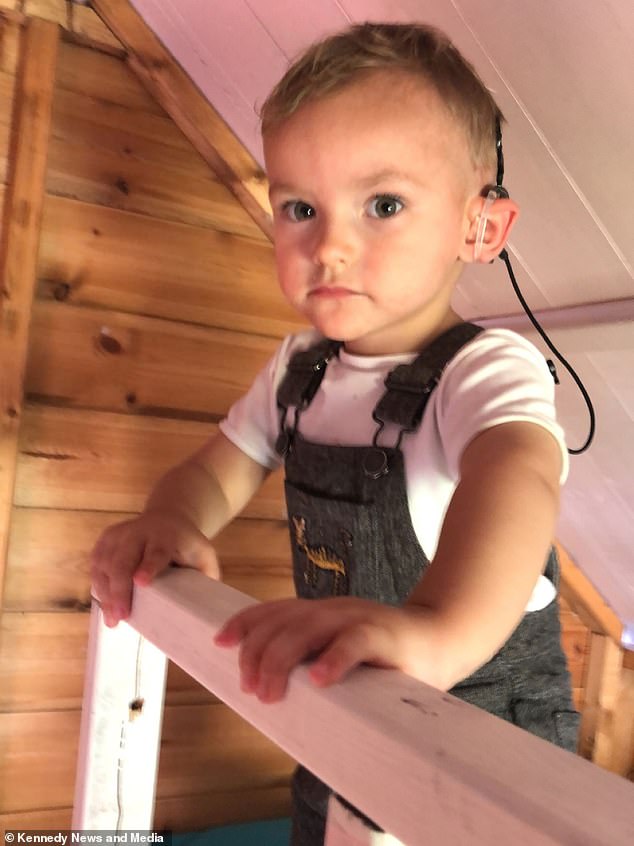 His parents, desperate for their son to live a normal life, decided to have him fitted with the device (pictured), which essentially connect a microphone directly to the brain to recreate hearing

The little boy’s genetic condition means he has got a missing partition between his brain and his cochlea, which is also underdeveloped.

The cochlea is a portion of the inner ear that receives sound in the form of vibrations.

It converts vibrations into nerve impulses which are taken up to the brain to be interpreted as sounds.

Teddy had been fitted with hearing aids when he was just six weeks old but they weren’t powerful enough to allow him to hear.

His parents went ahead with fitting him with cochlear implants which essentially connect a microphone directly to the brain to recreate hearing.

They work by bypassing the normal hearing process involving the cochlea, instead replacing it with electric signals. 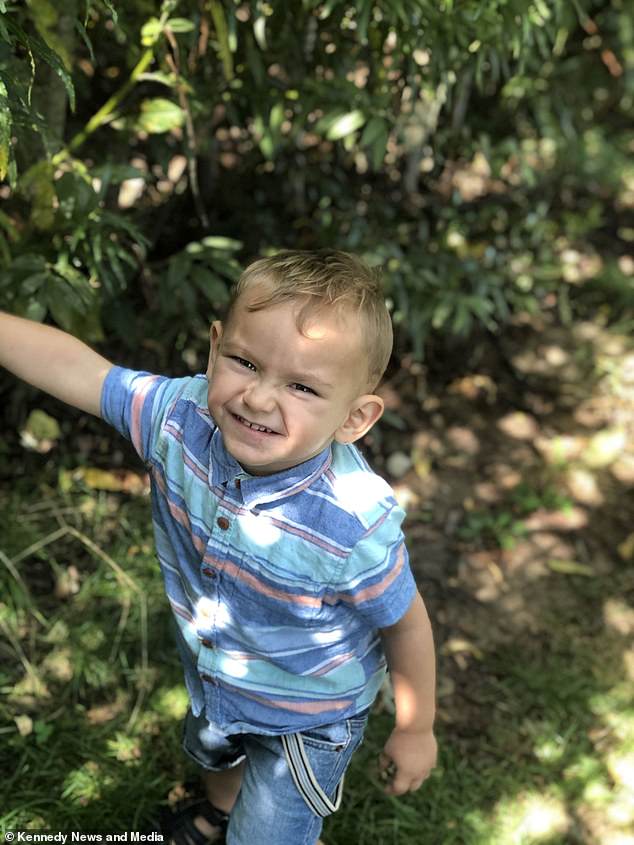 The cochlea is a portion of the inner ear that receives sound in the form of vibrations. It converts vibrations into nerve impulses which are taken up to the brain to be interpreted as sounds

While the operation for cochlear implants are usually relatively straightforward, the 23-month-old’s condition meant he required extra care as he began to leak fluid from his brain during the surgery on July 26.

The parents were warned that their son was at high risk of contracting meningitis, but after a one-day stay in hospital, the little boy was perfectly healthy.

Teddy now has the hearing age of a newborn and will be put through speech therapy.

But despite only having an implant in one ear his doctors are certain he will be able to go to school by the time he is four.

Mrs Shotter, who works as a support worker, said: ‘Both my parents were deaf. I’d always said before I had a child I would never have a cochlear implant for my son, until we got a lot of information given to us.

‘It obviously swayed my decision. When Teddy was born I said, ‘he’s going to have it’ because you just want what’s best for your child.

‘It was a hard decision to make. We had a lot of sleepless nights because they did say he had a high risk of meningitis. We had to take the risk and he made it. 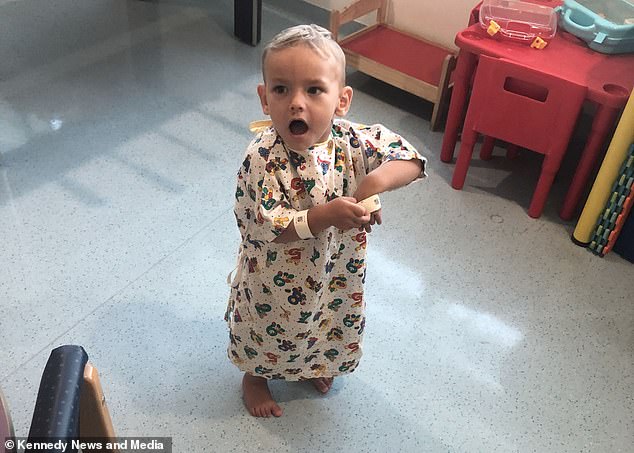 ‘He was completely fine. He had no sickness. He literally bounced right back. Now it’s the hard work of teaching him to talk and to hear sounds.’

She added: ‘At the moment if someone comes round we ask them to bang on the door so he can understand what the noise of the knocking of the door is.

‘We’re playing him different sounds and talking to him, just to get him used to it. ‘If I say, ‘Teddy’ he will turn around and look.

‘I don’t know if he recognises my voice yet but [he hears] a sound so he looks for the sound.

‘His brain scrambles all the noises and has to work out what everything is and so on so he can get to grips with.

‘Hopefully by the time he is that age he’ll be talking just like any other kid.’

HOW DOES A TRADITIONAL COCHLEAR IMPLANT WORK?

Cochlear implants are small hearing devices fitted under the skin behind the ear during surgery.

They have an external sound processor and internal parts, including a receiver coil, an electronics package and a long wire with electrodes on it (an electrode array).

The external processor takes in sound, analyses it and then converts it to signals that are transmitted across the skin to an internal receiver-stimulator, which sends the signals along the electrode array into a part of the inner ear called the cochlea.

The signal is then sent to the brain along the hearing nerve as normal.

This means cochlear implants are only suitable for people whose hearing nerves are functioning normally.

The implants cannot restore normal hearing but they can give a deaf person a good representation of sounds, helping them understand speech.

Whereas hearing aids amplify sound so they can be detected by damaged ears, cochlear implants bypass damaged parts of the ear and directly stimulate the auditory nerve.

Signals generated by the implant are sent via the auditory nerve to the brain, which recognizes the signals as sound.

Hearing through an implant is different from normal hearing and takes time to get used to it.

It allows people to recognize warning signals, understand their environment and enjoy conversations with people.

If a cochlear implant is recommended, it will be inserted into the ear (or both ears) during an operation and switched on a few weeks later.