“If music be the food of love, play on!” wrote Shakespeare, and this week’s camera club theme revealed a deep love of music among members.

Joy Rawlins also captured music up close, but focused on the instrument rather than the player.

ALSO READ: The Camera Club celebrated changing times at the end of summer.

Ian White’s image of a traditional organ grinder performing in St Petersburg, Russia features a monkey curiously peeking out from its master’s shoulder.

An animal and master also feature in Julia Johnson-Fry’s picture of an iconic sculpture of a dog and phonograph made famous as the logo for music chain shop HMV.

The Elton John lookalike taken during a Scarecrow Trail by Eric Denton can’t hold a candle (in the wind) to the original, but the dummy’s creator was talented, according to Roy Pyniger, who gave it a 10 out of 10.

Roy’s own featured image was entitled Time to face the music, and featured the engraved sign over the door of an old police station.

‘Time to face the music.’

First time poster Peter Gergely was so taken by the theme that he could not decide which of his black and white snaps of street performers around Oxford he should post in the Facebook group.

Jolanta Sakalauskienė replied to tell him he had taken some “really gorgeous shots.”

Nick Peck’s clever yet simple photograph featured an earphone alongside written music notes, showing some of the different elements of music, and how it can have different meanings to different people.

David Fearneyhough’s photo of Kraftwerk at the Oxford new theatre in 2017 shows how much of a spectacle for the crowd live music can be.

Meanwhile, Diane Braggs’ image of a lone listener at Esatborne Bandstand proves that music can be enjoyed alone as well as by large crowds. 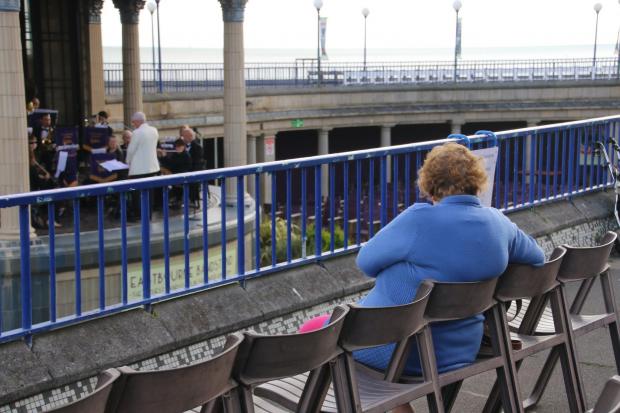 A concert for one at Eastbourne taken by Diane Braggs.

Next week’s theme is ‘The Midas Touch’ in tribute to Blenheim Palace’s missing golden toilet.

Join our Camera Club – which now has more than 1,100 members online by searching Facebook for Oxford Mail Camera Club.