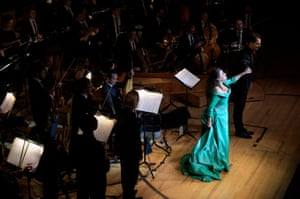 It’s a decade and a half since Teodor Currentzis promised to save classical music. He was a young newcomer, his evangelism raw and provocative. The Greek-born, Russian-based conductor (b1972)is now mid-career, his fervour if anything more audacious. Last week he and his period-instrument ensemble, MusicAeterna, provided a triumphant finale to the 2019 Lucerne summer festival by performing all three Mozart/Da Ponte operas (Le nozze di Figaro, Don Giovanni, Così fan tutte) in concert stagings, with the mezzo-soprano Cecilia Bartoli a star attraction. You could hear the audience’s intake of breath as Currentzis beetled into the overture to Figaro at cartoon car-chase velocity. And what was that thumping? Ah yes, the sound of his boot heels rhythmically landing on the podium. His jump-squat conducting style is in a class of its own.

More familiar on the European festival circuit, notably Salzburg, Currentzis has hardly been seen in the UK. Last year he and his musicians – previously state-funded and resident in Perm, near the Urals, now independent and based in St Petersburg – gave a BBC Prom. Projects in Manchester and at the Royal Opera fell through. Nor has he yet made his US debut: he will conduct MusicAeterna in Verdi’s Requiem at New York’s Shed in November. The New York Times carried a feature in anticipation, with the headline: “Saviour or Charlatan?” This gives the Currentzis flavour.

He directs every note, waving his hands right in the faces of the singers, though he refrained with Cecilia Bartoli

Currentzis and MusicAeterna have already recorded the Da Ponte cycle. I found the discs a struggle to get through and put them aside. Speeds now breakneck, now almost becalmed, the fussy ornamentation and idiosyncratic accentuation don’t easily bear repeat listening. Yet these were precisely the qualities that gave the Lucerne festival concerts their compelling energy and fire. You have to be there. CD sales aside, this is what Currentzis would want. Repetition is anathema to him. This conductor demands the maximum from his musicians. Rehearsals are reported to go on late into the night, regardless of the union rules other orchestras abide by. The exhaustive attention to detail that results – the hair-raising, fleet-fingered string playing; the mellow woodwind, raspy brass and abrupt, percussive (rather than resonant) timpani – adds up to an experience that is arresting, often vulgar and irritating, but affecting.

Much of the singing, Bartoli and some of the main soloists aside, was unexceptional, but the sense of ensemble and risk compensated. The chorus was magnificent, the orchestral playing breathtaking. Currentzis’s youthful musicians, taking only the briefest of pauses, are on their feet throughout. The continuo players, who accompany the recitatives, improvise and decorate roughly twice as much as usual. Snatches of the Nokia theme, and a Bach violin partita, crept into the fortepiano flourishes. Why not? Mozart would have adored the zest of their Figaro, the Bacchanalian madness of Don Giovanni – which ended with the Don in hell, forgoing the final ensemble – and the erotic temerity of Così fan tutte.

Currentzis’s approach is old-style authoritarian. He directs every note and phrase, waving his hands right in the faces of the singers, though he refrained with Bartoli in this, their stage debut together. As well as a concert of Mozart arias, she sang Despina, in Così, a role she first played in 1996. Currentzis may reckon she knows how it goes. Sparky, spiky, witty and brilliant, she in turn seemed to have no objection to Currentzis’s more extreme tempi. At the same time, she centred the performance with her impeccable musical intelligence and style. It was the most successful of the three operas.

With too many cast members to name, special praise to Irish mezzo-soprano Paula Murrihy (Cherubino/Dorabella) and Federica Lombardi (Donna Elvira). The Greek baritone Dimitris Tiliakos and American bass-baritone Kyle Ketelsen were well matched as Don Giovanni and Leporello, with the veteran British bass Robert Lloyd making a welcome appearance as the Commendatore. To fit in with Bartoli’s schedule, Currentzis broke his usual rule and conducted four concerts in a row. Lucerne festival audiences benefited. The SWR Symphony Orchestra in Stuttgart, where he recently became chief conductor, paid the price. A day later he cancelled his concerts there for September. Maddening though he may be, Currentzis is neither saviour nor charlatan. The truth is more subtle and more interesting.

We may feel his influence at the Royal Opera House’s new Agrippina next week, conducted by Maxim Emelyanychev. The young Russian (newly appointed music director of the Scottish Chamber Orchestra) spent time as Currentzis’s harpsichordist in Perm, and shares a similarly incisive, if less reckless, verve. The ROH season began last week with two revivals, Don Giovanni – live in cinemas on 8 October – and Massenet’s Werther, the third return of Benoît Jacquot’s 2004 production, with designs by Charles Edwards that grow more austere and elegant as the tragedy darkens. Edward Gardner, conducting, allowed the ROH orchestra free rein in the brass-heavy, doom-laden fortissimos. There was delicacy too: the strings, in the passage accompanying Werther’s letter about the grey winter sky, achieved a silvery eeriness.

The Peruvian tenor Juan Diego Flórez, tackling a vocally weightier part than usual, sang the title role. He isn’t a nuanced actor but conveyed this romantic hero’s relentless, lovelorn depression effectively, his voice true and passionate, almost always cutting through the orchestral outbursts. The American mezzo-soprano Isabel Leonard made a striking ROH debut as Charlotte, resolute, convincing, entrancing. Albert, her dull husband, was awarded unusual depth by the South African baritone Jacques Imbrailo, who can make standing stock-still look interesting. Heather Engebretson (Sophie) and Michael Mofidian (Johann) gave classy support. As long operatic deaths go, Werther’s is epic. How Charlotte managed not to splash blood on her ivory dress, and what happened when she got home, are questions we can only ponder. 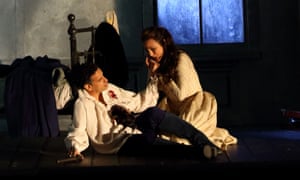 Werther continues at the Royal Opera House, London, until 5 October