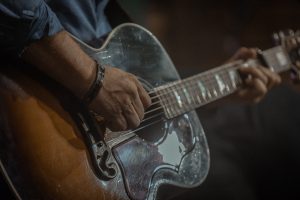 Park City is now home to the “The Best Little Mountain Music Festival In America.” The inaugural Park City Songwriter Festival, crafted for devoted listeners of America’s greatest musicians, was founded in-part by songwriter Aaron Benward as a celebration of his favorite aspects of songs and the intimate stories behind them.

Benward is no stranger to the bright lights and big stages of the music industry. He first entered the music scene as a Christian Contemporary artist as part of a father-son duo, Aaron Jeoffrey. The two released several studio albums and produced numerous chart-topping singles before Benward debuted as a solo act with his album “Imagine.” Even with his music’s acclaim, Benward remains passionate about the closeness of songs and connecting listeners to what he calls, “the heroes of music — the songwriters.” This drive inspired his co-created “Nashville Unplugged: The Story Behind the Song” events, where listeners and musicians alike share their love for music.

It’s fitting, then, that the Park City Songwriter Festival was dreamt up in the same way. In tandem with friends Ben Anderson and Scott Thompson, Anderson has been developing the event since January 2018. Anderson’s focus remains in promoting concerts for music lovers, as the president of the non-profit Mountain Town Music and bassist in his own Nashville band Aiko. Thompson, as a music fan himself, owns two of the venues on Main Street — O.P. Rockwell, where Western music hall meets Victorian speakeasy, and the Rockwell Listening Room, converted to an up-close and personal venue.

Though this celebration of country and folk music takes place away from the music’s Nashville roots, Benward describes Park City as the perfect location for the event. “This is the perfect spirit and environment to experience music in its most organic form, with the venues all located along Main Street.” Patrons can easily move through downtown Park City and the unique atmospheres of five distinct venues — something that could only work in the heart of one of Utah’s most popular destinations.

However, the personal environment of the festival shouldn’t lure attendees into overlooking the sheer talent of the lineup. Featuring spectacular headliners like “bayou soul” artist Marc Broussard, New-Orleans based guitarist Anders Osbourne and long-running band the North Mississippi AllStars, the festival artists — over 40 in number — boast a combined total of 17 Grammy wins, 12 Academy of Country Music Awards, 11 American Country Awards wins and five Hall of Famers, among many other accolades.

The PCSF has even partnered with outreach organizations such as the Recording Academy’s MusiCares and Osbourne’s Send Me a Friend to support professionals in the music industry, placing a charity focus on the festival to help artists struggling with mental health issues or addiction recovery that often go unnoticed. 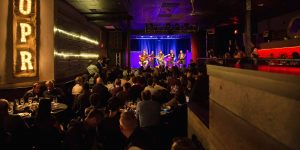 One cornerstone of the PCSF that makes it different from any other festival is its honesty. Founded by music lovers, to share music’s bare-bones and to connect talented storytellers to their listeners, the atmosphere of the event is sure to be magical. As Benward said, “There’s nothing like being up close and personal to music at its core – the song. No smoke and mirrors, no lights and walls of sound. Just the songwriter on a stool with their instrument of choice, up close and personal.”

The festival will be held on Sept. 13-14 on Main Street in Park City, Utah. The two-day event features dozens of performances and workshops in the five venues. There are three ticket tiers, including various levels of access to reservations, dinners, nightly concerts and swag. Tickets are still available and can be purchased here or through the festival’s website.