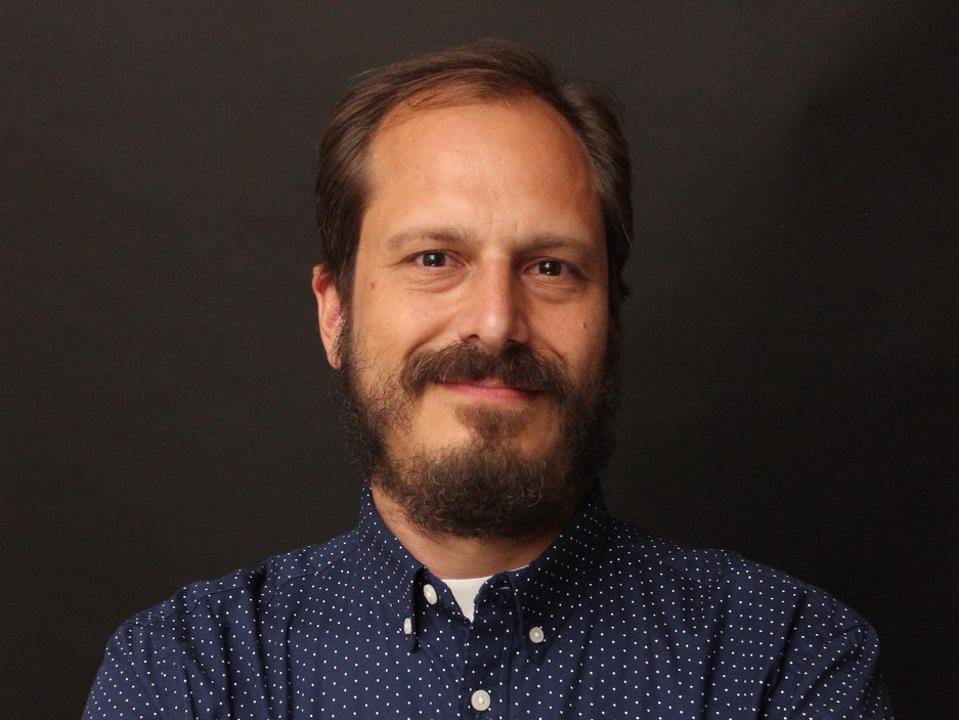 Dan Mackta is the managing director of Qobuz USA. He lives and breathes the music industry and has an extensive personal network across media and entertainment​.

It’s been half a decade or so since music streaming services really took hold and death a death blow to the mass market for physical music formats. Internet-based music was originally given a big boost in 2001 when Apple launched its original iTunes program, based on a piece of software called SoundJam which Apple bought from Cassidy & Greene.

Some 18 years on and iTunes has now been rebranded as Apple Music, a streaming service rather than the place to buy and permanently download music tracks that iTunes started as. Then along came Spotify, with the novel concept of not owning music but renting it instead by paying a flat-rate monthly subscription. Since then, the idea has firmly taken root, especially among younger music lovers. However, older music aficianados have, perhaps, been a little more resistant to the idea of renting their music rather than buying it.

Music streaming has also met with some resistance from audiophiles because this discerning group of music lovers invests a small fortune in high-end audio equipment, and audiophiles come from a generation that grew up listening to music stored on physical formats like CDs, and vinyl LPs and tape before that.

The main objection to music streaming from many audiophiles has been the relatively low audio quality of the MP3 format that was originally used for streaming. To stream music efficiently, the music was digitized and compressed, squashed and stripped of its subtlety to make the file small enough to stream or download over a slow Internet connection. The reduction in audio quality may not be especially noticeable when played on a smartphone or Bluetooth speaker, but there was no way it could compare to the audio quality of a CD played on a truly great audio setup.

However, the last five years or so have seen a massive rollout of high-speed fiber broadband, cable services, and 4G mobile networks, offering faster download speeds that can stream much higher-quality audio files with ease. It’s probably this major technical change in the Internet’s infrastructure that has made Hi-Res music streaming a reality. 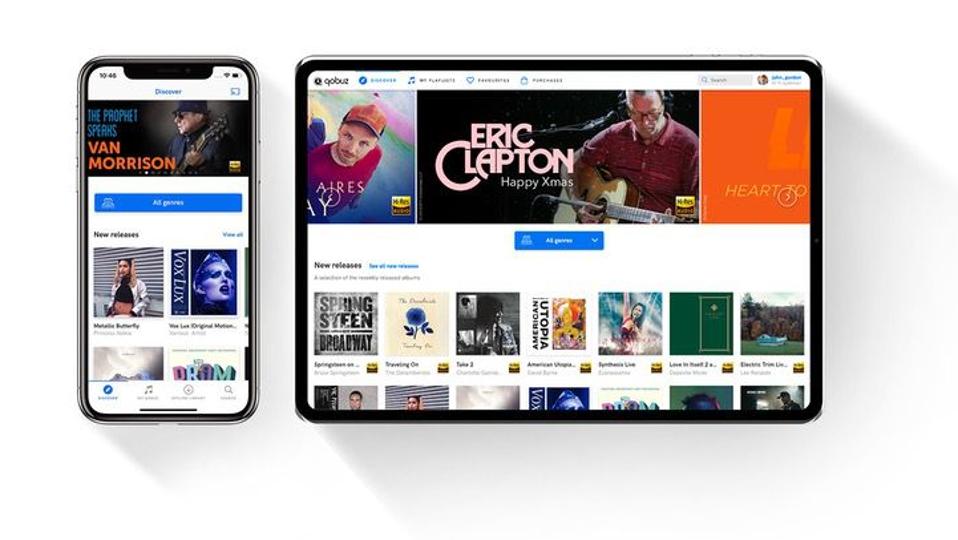 The layout of the Qobuz app is clean and neat with a white background that marks it out from TIDAL’s black color scheme.

Currently, the leader of the pack in terms of high-quality streaming is TIDAL, followed by Deezer. Both services offer high audio quality on various platforms, including Mac OS, PC, iOS and Android. Increasingly, support for these streaming services is also being baked-in directly to audio equipment such as digital music streamers. It’s still a niche market at the moment, but there’s no question that high-quality streaming is taking off as the market and availability of physical media melts away with CD sales slumping, or being partly displaced by the recent vinyl revival.

Six months ago, Qobuz, a French music streaming service launched in the USA, offering 24-bit FLAC music files with a resolution that’s even higher than CD quality and a format that can shine when played on high-end audio gear. As well as streaming files, Qobuz also offers subscribers the option to buy Hi-Res downloads that can be played and stored on a server or computer at home, or on a portable DAP (digital audio player) when out and about.

The Qobuz service has been available in France since 2007, but it’s only recently that the concept of Hi-Res streaming has begun to gain real traction. To mark the first six months of being in America, I spoke to Dan Mackta, managing director of Qobuz USA, and asked him about the future of streaming in the world’s largest and most dynamic music market.

Mackta points out that improved technology across the board and a potential market of some 32million subscribers, Hi-Res streaming in the USA has finally arrived for audiophiles. Mackta points to the songwriter Neil Young as the person responsible for getting the whole Hi-Res streaming revolution going. It was Young who was the driving force behind Pono – the Hawaiian word for ‘proper’ – a pioneering, and now defunct, Hi-Res streaming platform that Young launched back in 2014, delivering the same streaming fidelity that Qobuz is now offering in the USA. Neil Young has gone on record for lamenting how low-quality streaming has crushed the life out of music. In 2015, Young even went so far as to withdraw his music from Spotify, Apple iTunes, and other streaming platforms.

I started out asking Mackta how the streaming market has developed over the past five years since Pono launched. Where exactly does Qobuz see itself fitting into the Hi-Res market?

“Qobuz is aimed directly at the small percentage of listeners who value audio quality, first and foremost. Beyond that, we try to super-serve these fans by curating new music releases, playlists, and original editorial content that will appeal to them. Also, we work directly with the world’s foremost hi-fi equipment manufacturers to bring the quality of lossless and Hi-Res music to their customers with the ease and convenience afforded by streaming.”

I wanted to know what attracts subscribers to Qobuz. There’s a good choice for high-quality streaming from the likes of TIDAL and Deezer, so which demographic did Mackta think Qobuz was attracting and why?

“Neither Tidal nor Deezer offer native 24-bit FLAC streaming and there is a natural audience for this format. Our focus on genres like jazz, classical, and soundtracks gives fans of non-mainstream music a place to discover and enjoy new music. Our users are older and more affluent than the mass mainstream music consumer. They’re looking for a service for them, a service that isn’t trying to be all things to all people.” 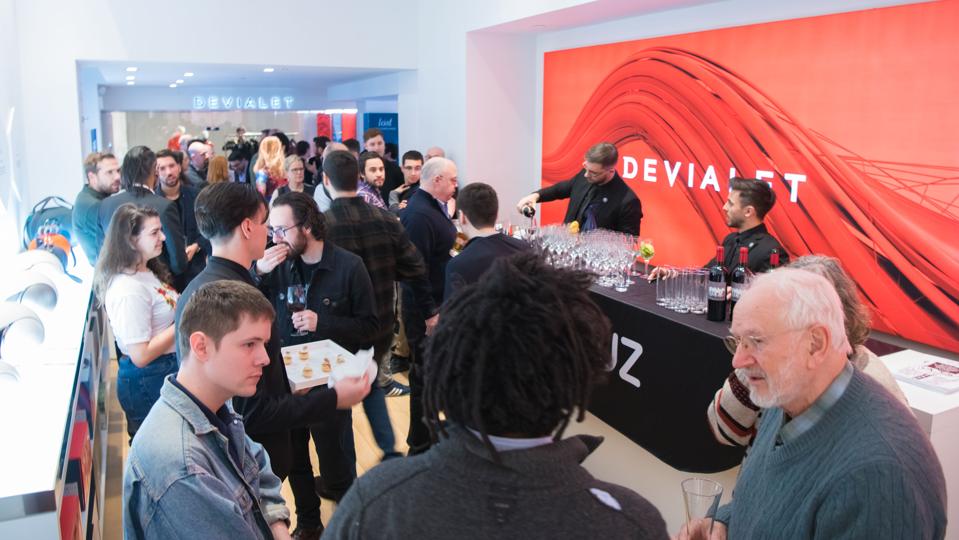 The Qobuz USA service was launched with a party at the Devialet Store, New York, back in February 2019.

Qobuz started in France, so I wondered if that made the company different when compared to other streaming services on the market?

“The French notions of beauty and quality drive many of our decisions. I don’t think anyone else can say that,” Mackta said. Fellow French streamer Deezer doesn’t, perhaps, make as much of a virtue of its Gallic origins.

So how many tracks does Qobuz now offer? I wondered if there were any exclusive artists or music that marks Qobuz out from its competitors.

“Qobuz has roughly 40 million lossless CD-quality (16-bit/44.1k FLAC) tracks and over two million Hi-Res (24-bit up to 192k) ones. Mackta went on to say that Qobuz hasn’t done many exclusives yet but they are looking at some cool possibilities. He added: “What is unique to Qobuz, other than the sound quality, is the attention to credits and metadata. We’re the only streaming service that offers digital booklets right in the player. We also have exclusive long-form interactive written articles called Panoramas, covering artists, labels, and genres of interest to our users.”

Qobuz prides itself on the two million high-quality 24-bit FLAC tracks in its catalogue, while competitor TIDAL makes a big play of using the MQA (Masters Quality Authenticated) format developed by Bob Stuart, which features a unique compression technology. MQA claims to deliver Hi-Res music files that are remastered directly from the original master tapes and delivered in a much smaller file size than the larger FLAC format. Apple is also joining the Hi-Res party by relaunching its Hi-Res offering as Apple Digital Masters. I was interested to hear how Mackta saw the high-quality streaming market developing over the next five years?

“More niche services will be developed but the mainstream will move toward an even more passive, AI-music heavy, press, play, and lean-back experience. We hope that this will cause a reaction, similar to the vinyl boom, from music fans who want to know about the context of the music they are hearing. And they want to hear it in decent quality.” 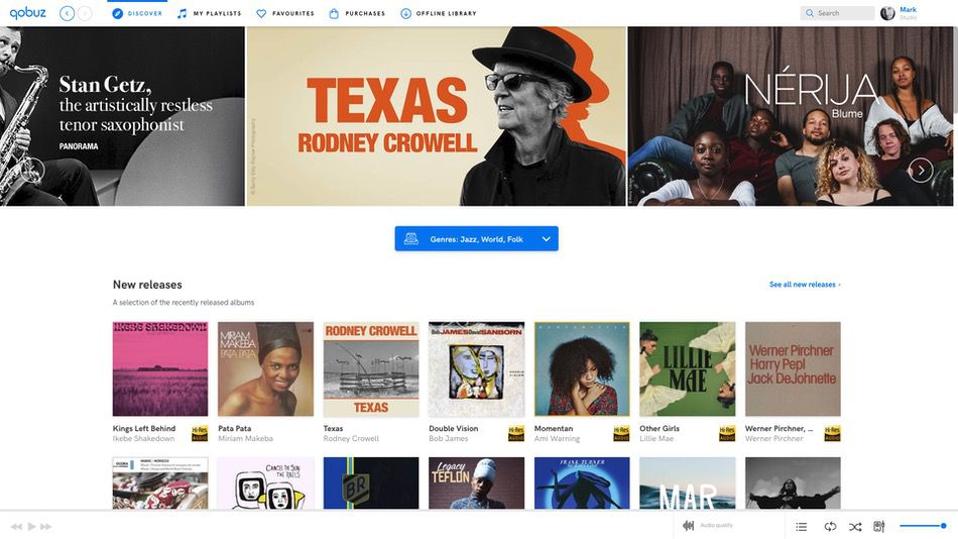 The Qobuz app is a clean and neat, offering access to playlists, favorites, and offline music library. The service uses your choices to understand what music you like and offers suggestions for​ new music.

Discussing financials with executives in the music streaming market is sometimes a sensitive topic but I asked if Mackta thought the high-quality music streaming market had good potential for profit in the future. Is it a case of reaching a tipping point or critical mass in terms of subscriber numbers for that to happen?

“Streaming is making a million dollars an hour for the major labels, but it’s a very tight margin business for streaming services, and the number of subscribers doesn’t fix this. It’s still a big unknown. At Qobuz we’re seeking profitability by keeping costs down and focusing on what we spend on customer acquisition.”

And how fast is that user-base expanding? Which subscription level is proving to be the most popular option?

“Our user-base is growing on track with our expectations,” replied Mackta. “We anticipate that it will accelerate. Studio (24-bit Hi-Res streaming) is our most popular tier and our most popular music genres are rock, jazz, and classical.”

As a final question, I ask Mackta what marks Qobuz out from the other high-quality streaming services? “We are the music lovers!” he replies.

No doubt TIDAL and Deezer will have something to say about that.