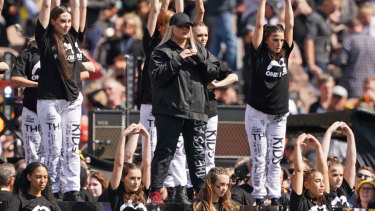 But a good back story does not exciting pre-match entertainment make.

She tried hard, with her new release The Kids Are Coming and her global smash Dance Monkey, but her efforts mostly died on screen and, to judge by social media, at the ground.

Chart topper: The Mornington Peninsula’s Tones and I has had a number one song across the world.Credit:Scott Barbour

She was followed by fellow local music sensation Dean Lewis, whose mournful reflections on sadness and heartbreak – Be Alright and Waves – had no place being forced on a crowd hyped and charged for the year’s biggest game of football.

Proceedings were rescued by Paul Kelly, appearing at the MCG on the last Saturday in September for the first time since 2012. Kelly knows Melbourne, he knows football and he effortlessly owned the occasion.

He opened with Leaps and Bounds, his 1987 ode to Melbourne that opens with the lines:

I’m high on the hill, looking over the bridge, to the MCG. And way up on high, the clock on the silo says 11 degrees.

Perfection. It could have been written yesterday.

This was followed with a cracker rendition of Dumb Things, a Kelly classic of similar vintage. Alas, he left the stage after only two songs; he should have been there for four.

The three headline acts were bookended by one abandoned grand final tradition and one regular one. In his MCG debut, John Williamson kicked things off with the return of Waltzing Matilda, which he struggled to turn into a stadium-wide singalong.

And to end, we had the always irresistible Up There Cazaly from Mike Brady. Whatever musical mess-ups have come before, it never fails to deliver a tingle up the spine.

Most Viewed in Sport