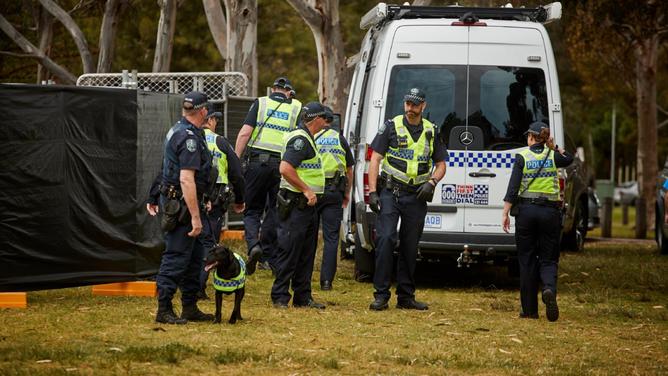 Police say detecting and preventing drug offences will be their focus at Sunday’s Listen In festival at Bonython Park.

Patrols on foot, bicycle and mounted officers will keep a watchful eye on festival goers.

The Dog Operations Unit will be conducting a sweep of the grounds before the festival opens at 2pm, and will be at the entry gates, Chief Inspector Matt Nairn warns.

“There’s no way to know for sure what’s in a pill, or what adverse reactions an illicit substance might cause from one person to the next.”

The crowds, expected to reach 10,000, will be refused entry if found in possession of drugs.

Camera IconPolice with sniffer dogs outside the Listen In festival at Bonython Park last year — they will return again for this year’s festival on Sunday. Credit: News Corp Australia, Matt Loxton

“Police will also be watching fence lines, to ensure that only people who’ve paid for the privilege of attending are inside the festival grounds.”

The southbound lane of Port Rd in the vicinity of Bonython Park will be restricted to 25km/h between 10am and 11.30am, and drivers are asked to be alert to extra pedestrian traffic.

At the same festival last year police arrested one man who attempted to flee. He was chased down and taken into custody a short distance from the festival. Two other people were arrested later in the afternoon.

Pill testing at Groovin the Moo Festival was enforced this year for the second trial in Canberra, but the state government voted to reject pill testing at SA festivals earlier this year.

The 40,000-strong crowd at NSW Listen Out festival at Centennial Park had police tightening their belts, as they denied entry to an 18-year-old in possession of a small bottle of alcohol.