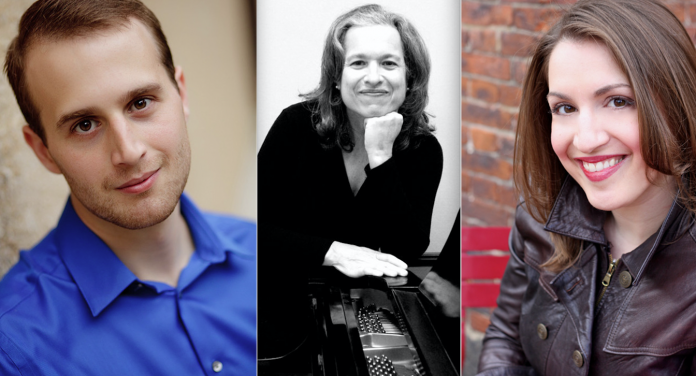 On Sunday, Oct. 20, at 3 pm, the West Tisbury library will host a fall concert featuring Music Street musicians. According to a press release, this vocal concert, “Reflections on Water,” will feature soprano Bethany Worrell and baritone Vincent Turregano, accompanied by pianist Diane Katzenberg Braun. Refreshments will be served. This concert is sponsored by the Friends of the West Tisbury Library and the West Tisbury Library Foundation. Free and open to the public.

Music Street founder and pianist Diane Katzenberg Braun is a graduate of Oberlin College and New England Conservatory, enjoying a wide range of musical collaborations, both instrumental and vocal, in her life in Boston and as an accompanist at the New England Conservatory. As founder of Music Street, her mission has been to bring the highest-quality live music performances to underserved areas, including homeless shelters and hospitals, as well as to facilitate piano donations where they are welcome. Bringing concerts in the off-season to the inviting space at the West Tisbury library has been a special pleasure for Music Street musicians.

Hailed as performing with “a gorgeous and flexible soprano that revealed a large measure of dramatic intelligence and musical acumen,” soprano Bethany Worrell has performed in Boston, Pittsburgh, Chicago, Malibu, Salzburg, Austria, and Florence, Italy. Worrell has performed with the Opera Theater of Pittsburgh, MetroWest Opera, North End Music and Performing Arts Center (NEMPAC Opera), the Atlantic Symphony Orchestra, and the Boston Modern Orchestra Project. Worrell also sings with the Boston Symphony Orchestra and the Boston Pops in the first soprano section of the Tanglewood Festival Chorus.

Praised for his “powerful and lyric” baritone, Vincent Turregano is at home with comic and serious roles alike. Turregano joined Boston Lyric Opera’s 2015–16 season as an emerging artist, covering the roles of Schaunard and Marcello in their production of “La Bohème” and singing Bogdanovitch in their production of “The Merry Widow.” He recently performed Dandini in “La Cenerentola” with the Music Academy of the West, John Sorel in Menotti’s “The Consul,” and the Marquis de la Force in Poulenc’s “Dialogues of the Carmelites.” He also sang Guglielmo in Mozart’s “Cosí Fan Tutte.” Turregano made his Boston Opera Collaborative debut as Alwan in Mohammed Fairouz’s “Sumeida’s Song.” He studies with Bradley Williams at the New England Conservatory.