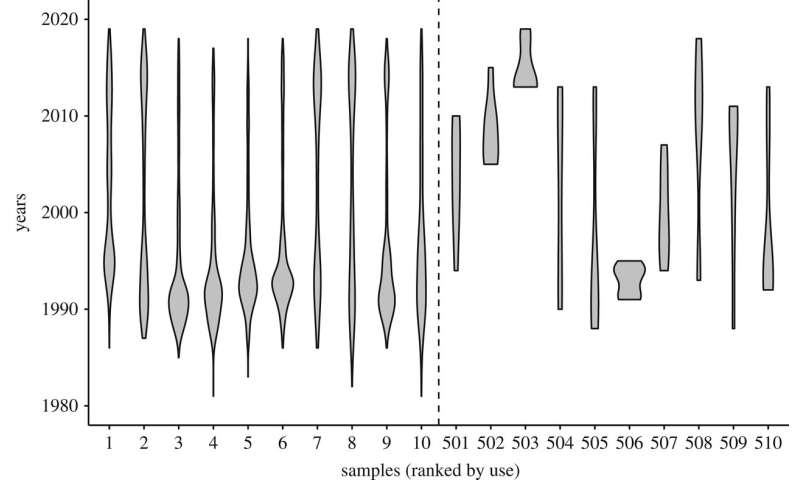 Violin plots showing the frequencies of samples, ranked by overall use, from 1980 to 2019. The x-axis is the rank of each sample, and the y-axis is the year. To the left of the dotted line are samples 1–10, while to the right are samples 501–510. More common samples (on the left) appear to be much more stable over time than rarer ones. The high popularity of the more common samples in the late 80s and early 90s is likely due to the rapid expansion of sample-based hip-hop and dance music triggered by increased access to digital samplers and more relaxed copyright enforcement during that period. Credit: Royal Society Open Science (2019). DOI: 10.1098/rsos.191149

Mason Youngblood, a psychologist at City University of New York, has found a way to study cultural conformity bias in groups of people by studying music sampling used on commercially sold songs. In his paper published in the journal Royal Society Open Science, he describes how he compared sampling rates for different groups of musical artists and what he found.

Youngblood sought to learn more about how processes at the individual level wind up generating population-level patterns—a major concern of evolutionary cultural research. He notes that other researchers have found that some types of frequency-based bias (whether there is novelty or conformity) in music often drive cultural diversity on a large scale. That gave him the idea to look at music sampling as a means of learning more about a cultural bias.

Music sampling is the practice of borrowing a tiny piece of music another artist has recorded and using it in a new composition. Music sampling has been popular throughout the history of recorded music, and is usually used as a means of inclusion—samples are generally easily recognized by the people who listen to the type of music containing a sample. In recent times, music sampling has become very popular with hip-hop and artists assembling dance music. To learn more about what music sampling might reveal about cultural conformity bias, Youngblood ran algorithms on data from the WhoSampled database.

Youngblood reports that he was able to find which piece of sampled music has been used the most by other artists (a drum break from “Amen, Brother”)—and the ways that it is used by artists working in different genres. He found, for example, that hip-hop artists tended to use more of the same snippets than artists in other genres. Put another way, the number of new snippets of music making their way into hip-hop songs was relatively small compared to pop, rock or other types of music. He suggests this is an indication of the conservative nature of the genre despite its reputation as being quite the opposite. He further suggests that his findings are evidence of cultural conformity bias and show that the study of music sampling is a viable means for studying cultural conformity bias in general.