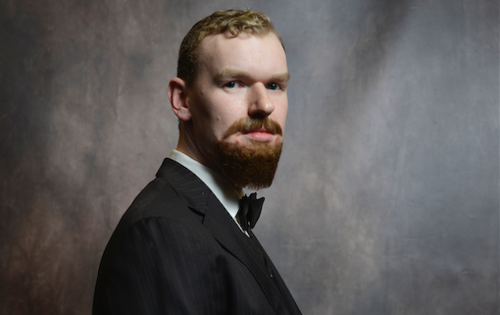 “ASSASSINS” is not a likeable musical. But then it’s not meant to be. With a book by John Weidman and brilliant music and lyrics by Stephen Sondheim, “Assassins” is a searing comment on gun violence in America, and feels even more prescient today than when it was first premiered in 1990.

The musical focuses on nine disparate characters that have embedded themselves, either deliberately or by accident, in history, by assassinating, or attempting to assassinate, an American President.

For their production for Everyman Theatre, directors Kelly Roberts and Grant Pegg have chosen a stark, Brechtian presentation, with a minimalist setting, designed by Christopher Zuber, that embraces the ambience of the Belconnen Theatre to create a harsh, alienating environment. The only decoration being a canvas drape suggesting a faded Stars and Stripes hanging on the back wall, a rack of costumes, and a decaying western chuck-wagon from which the nine characters emerge, each carrying rough wooden crates, emblazoned with their names. These crates contain any props they need for their performance.

The entire cast remain onstage throughout the performance, which lasts around 100 minutes without an interval, as does Alexander Unikowski’s excellent seven-piece band, which is tucked in one corner in full view of the audience.

Within this uncompromising environment the action revolves around the interaction between these characters, who with one exception, never met in real life, with the directors confidently employing excellent lighting and sound, appropriate costuming and a range of theatrical devices, including balloons, bubbles and confetti, to enhance and embellish the fine performances of their uniformly excellent ensemble cast.

To justify the taunting ballad which opens the show, “Everybody’s Got the Right to be Happy”, each character is given the opportunity to explain their perverted motivations, either in song or monologue, often to unintentionally comic effect, even though none is set up as a caricature.

Jim Adamik unnerves with his intense portrayal of the Santa Claus-costumed Samuel Byck who attempted to hijack a plane to assassinate President Nixon by flying it into the White House.

Joel Hutchings gives a strong portrayal of Italian immigrant Giuseppe Zangara whose attempted to assassinate President-elect Franklin D. Roosevelt 17 days before Roosevelt’s inauguration, sent him to the electric chair complaining that there were no photographers at his execution.

Belle Nicol is mesmerising as the hippy member of the “Manson Family”, Lynette “Squeaky” Fromme, who joins forces in an attempt to assassinate President Ford, with the confused Sara Jane Moore, sympathetically portrayed by Tracy Noble in a delightfully comic performance.

However, among all these excellent performances, it is the superbly sung performance of Pippin Carroll as the charming balladeer who morphs into the confused Lee Harvey Oswald, taunted by the assembled ghosts of the others assassins, into shooting President John Kennedy, reprised with chilling footage of the actual event to provide a haunting climax to this excellently realised production, that burns itself into the psyche and lifts this production beyond just mere entertainment, especially in a week which heralds the trial of the perpetrator of the NZ massacre.