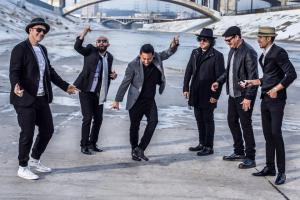 Ozomatli will be performing at Marty’s on Newport in Tustin, this New Year’s Eve.

LOS ANGELES, CALIFORNIA, USA, December 28, 2018 — – Ozomatli will be ringing in the New Year with a special New Year’s Eve celebration at Marty’s On Newport, located at 14401 Newport Ave, Tustin, California 92780.

Anyone who has been seeing Ozomatli perform live can attest to the fact that every performance is a special occasion. An Ozomatli show is a force of nature. It’s the unleashing of a funky, primal, rhythmic dance party that is so infectious that it’s literally impossible to stand still while watching Ozo perform. Can this already urgent, dynamic band turn it up on New Year’s Eve? Come and see for yourself!

Attempting to describe their music is nearly impossible, as their sound combines so many wonderfully intriguing musical elements that words cannot do it justice. Their sound is a combination of Latin, hip hop, rock, salsa, jazz, funk, reggae, and rap. Rather than attempting to imagine how this might sound, it makes more sense to use the opportunity to see the band perform LIVE this New Year’s Eve.

The band has earned three Grammy Awards. Their incredible music can be heard in feature films, TV shows, TV commercials, video games and more. With an instantly recognizable sound, the band has released some stellar recordings with extraordinary additional releases, Including the release of Libertad, the bands brand new song which will be released by OneRPM Distribution on January 26, 2018. .

Year after year, as people ponder New Year’s Resolutions, the goal is always to make the coming year even better than any previous one. No one can argue that starting the year off right, is the best way to kick start what lies ahead. A New Year’s Eve concert featuring Ozomatli is an undeniable way to set the bench mark for an incredible year ahead.

About Ozomatli (OZO)
Ozomatli are an American six-piece band playing primarily Latin, hip hop, and rock music, formed in 1995 in Los Angeles. They are known both for their vocal activist viewpoints and their wide array of musical styles – including salsa, jazz, funk, reggae, rap, and others. Since their inception, Ozomatli has released seven studio albums. The group is also known for advocating for farm-workers’ rights and immigration reform. The band has performed in various countries all over the world, including China, Tunisia, Jordan, and Burma serving as cultural ambassadors teaching and sharing music. Although the band has had many member changes over the years and has sometimes had as many as ten members, the current six members have been in the band since its debut album.

About Marty’s On Newport
Marty’s on Newport is an intimate entertainment venue, bar, and diner. With top-notch national acts in a small setting and a classic diner menu, entertainment is now a complete experience. Marty’s looks forward to bringing shows that even they thought were impossible to see at a venue like this. Marty’s on Newport is a new California Classic.