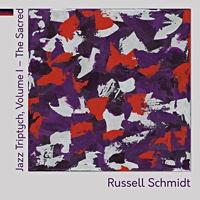 Arizona-based pianist and composer Russell Schmidt has a knack for releases that catch one’s attention. A 2013 release Anachromysticism was a combination of a CD and a two-record vinyl set, with horn-based music as notable as the format. Schmidt returns with another high-concept issue, the two-volume Jazz Triptych. The first volume is dedicated to “the sacred,” Schmidt and company’s versions of hymns and other religious oriented material, and the second covers “the secular,” a more mix collection including a couple Schmidt originals and standards.

The “triptych” in the title refers to the structureeach features nine tracks. The first three are performed by a trio with bassist Dwight Kilian, returning from “Anachromysticism,” and drummer Rob Moore. The second three-song sets add a horn section, Tito Carrillo, trumpeter and flugelhorn, Brice Winston, tenor saxophone, and Paul Ferguson, trombone. The final three put the leader’s vocals, a new discovery for this listener, in the forefront. Each three-tune set, by the way, is the perfect length to fit on the side of an LP. That adds a certain flow to the session.

Jazz Triptych, Volume 1 opens with Schmidt’s piano introducing that hoariest of hymns, “A Mighty Fortress Is Our God.” At first it is reverent then the piano slips away from that stolid Lutheran chordal structure. The trio swings out like David dancing before the Lord, while keeping the traditional harmonies in mind. They provide, it turns out, a good foundation for blowing. Next the trio turns to “Nyland” a Finnish folk melody that has been used for a number of hymns including “In Heavenly Love Abiding.” Here the altered harmonies seem to turn the traditional material more inward, taking it deeper. Duke Ellington’s “Heaven” comes from a very different tradition, and yet the tone of reverence is maintained as it builds toward a rhapsodic peak before resolving with just a whisper of the melody. With the arrival of the horns, the proceedings get livelier. “All That I Was” swings out with ease featuring a robust spot by Paul Ferguson. Schmidt and Ferguson worked together when the pianist lived in Northwest Ohio. Ferguson himself produced his own sacred set, “Jazz Vespers,” with the Cleveland Jazz Orchestra with Schmidt on the piano.

These three tracks are first rate neo-bop with all hands having a chance to make their mark. Brice Winston, also a “Anachromysticism” returnee, digs in, and Tito Carrillo shows he can be both tender as on his flugelhorn spot on “I’ll Go” and brassy on the freewheeling “Durrow” Then we turn to Schmidt’s voice. He has a light, high tenor. Transparent, even fragile. He never pushes it beyond its capabilities. His approach has an intimate late night quality, you’d hardly think it’d ruffled the flame on the candle, and it communicates that sense of awe and devotion as well as shouting. “Now the Green Blade Rises” is based on the lovely French folk melody “Noel Nouvelet,” which Schmidt is wise to keep in the fore. Schmidt injects some playful blues phrasing into “Love Divine,” and then closes with a heartfelt “Wayfaring Stranger,” that serves as a reflection on all that went before. 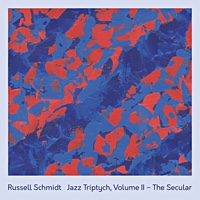 The tone doesn’t shift dramatically when we turn to the secular (not profane) on Jazz Triptych, Volume 2The Secular. Schmidt’s gentle introduction on Tears for Fears’ “Shout” sounds like a continuation of the sacred. The piano guides the trio as the story unfolds. They treat the rock tune with the same felicity and care as with Luther’s hymn tune. Schmidt is well equipped to do this. He’s ear is rooted in jazz impressionism, with a deep understanding harmonic color. He has the technique to pulled the music into unusual places, and the sense of structure to make sure the listener never loses the way. That’s evident on Monk’s “Evidence.” As with those hymns, he starts by paying tribute to the source before the trio finds its own voice. The telepathy of the trio is demonstrated on the seven-plus minute fee improvisation. Schmidt, Kilian, and Moore listen carefully as they build a narrative, in a similar spirit to “Shout.” They slide from episode to episode with each musician complementing the others, all the while hinting at the next turn.

Schmidt provides two originals. “Blew” is aptly titled, a blues-flavored blowing tune. But the composer eschews the obvious groove on his opening solo while the other horns dig in. “Percolate” evokes the stop-and-go groove of “Evidence” contrasted with some long notes. The solos blossom from and fade into ensemble improvisation, and then end abruptly with an exclamation point. “Sonnymoon for Two” is comfort food. Schmidt shows his grasp on melodic contour on the his first two vocal numbers. Carrillo stops in and delivers a strong solo on “I Have the Feeling I’ve Been Here Before,” a collaboration between Roger Kellaway and the Bergmans, and then Brice takes a turn on “Get Out of Town.” It ends with just Schmidt his vulnerable voice, communing with his piano, in a spare version of “Till There Was You.” The closer summons a late night at home alone vibe. The perfect way to say good night.

Tracks: A Mighty Fortress Is Our God; Nyland; Heaven; All That I Was; I’ll Go Where Yo Want Me To Go; Durrow; Now the Green Blade Rises; Love Divine, All Loves Excelling; Wayfaring Stranger.

Tracks: Shout; Evidence; Free Improvisation; Blew; Percolate; Sonnymoon For Two; I Have the Feeling I’ve Been Here Before; Get Out of Town; Til There Was You.