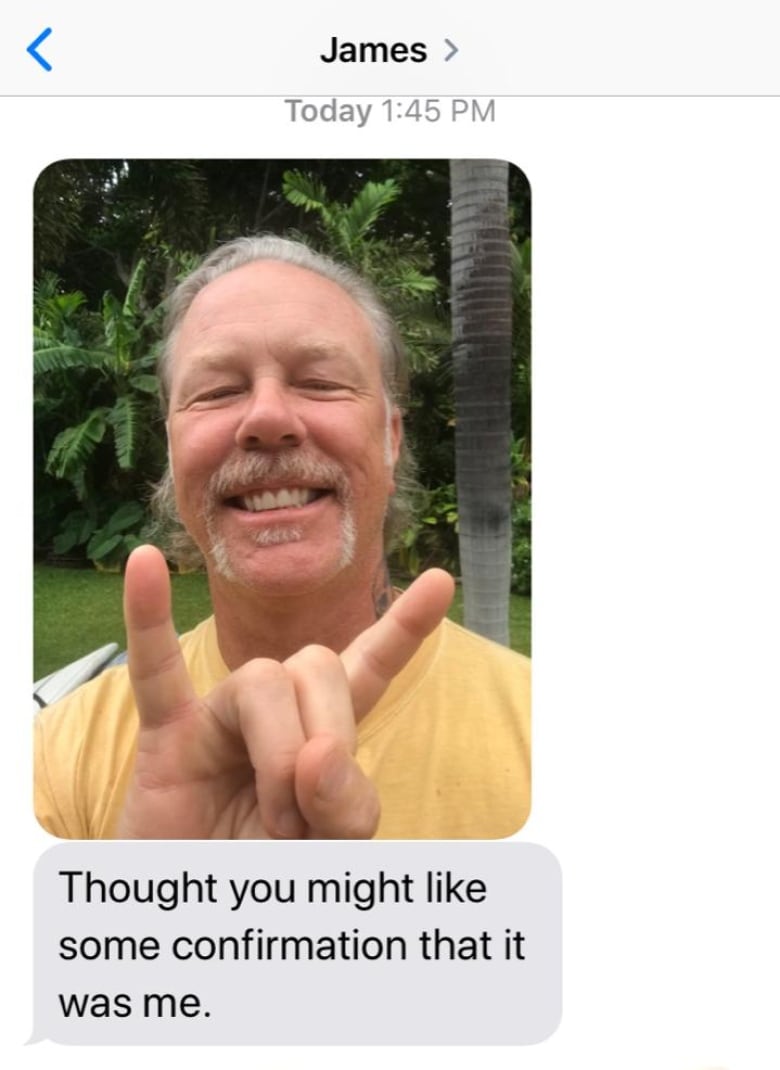 When Denise Gallant scared off an approaching cougar by blasting metal music at it, she thought that was the end of the story — until the band Metallica heard about the story.

Gallant was at work over the weekend when she got a call from a number in California.

“I answered it and this deep voice says, ‘Hi Denise, this is James Hetfield of Metallica,” she said.

“I was just kind of dumbfounded, I didn’t know what to say.”

So she asked him to prove it was him — which resulted in a text with a selfie photo.

The band had come across Gallant’s post on social media about how their music likely saved her life.

She had been walking with her dog near Duncan, B.C., two weeks ago when she came face to face with a large cougar.

“He was crouched down and in pounce mode,” Gallant told CBC’s On The Coast.

She initially thought she could scare the cougar off by yelling and making herself appear more threatening.

“I was yelling at the cat, I said ‘Bad kitty, go on, get.’ But he didn’t go anywhere,” Gallant said.

“I thought I needed to do something something a little more intense.”

She turned to her phone, looking for the most “intimidating” song she could find.

“The first song that came to my mind was Metallica’s Don’t Tread On Me because that was the message I wanted to give him,” she said.

She held up her phone and blasted the song as loudly as she could.

“As soon as the intro started, he turned and he ran,” Gallant said.

“I had actually said I would just really love to get a hold of the band and let them know that they saved my life,” she said.

August 6, 2019 Metallica fan Denise Gallant told us how one of the band’s songs got her out of a close encounter with a cougar. 7:45