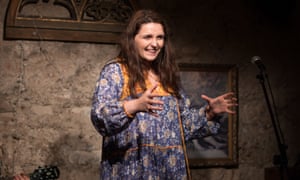 Karine Polwart’s Wind Resistance, which makes a welcome return to Edinburgh’s Royal Lyceum next year after beguiling the Edinburgh international festival in 2016, is a poetic homage to the landscape of the singer’s Midlothian home. Its combination of folk song and geography, its sense of people and place, makes it an ideal companion piece to three plays with a keen sense of landscape on this year’s fringe. Nowhere is this more than case than in Rowan Rheingans’s sublime Dispatches on the Red Dress (★★★★☆), set in Bretzenheim, the German municipality where the musician’s grandparents still live.

Performing with transfixing economy as she moves from banjo to fiddle to storytelling, Rheingans appears to be weaving a romantic tale of sweet-natured relatives and idyllic childhood memories. She describes her oma and opa (grandma and granddad) through the eyes of a devoted granddaughter: their “relentless” stories, their love of “happy-clappy” German folk music and penchant for peeling potatoes. She forgives their willingness to believe the immigrant scare-stories of the rightwing press because, well, they’re in their 80s and they don’t seem to be listening anyway.

But stitched into her narrative, with the subtlety of an expert dressmaker, is a darker strand. It takes only a short walk from her grandparents’ home to see the “field of misery”, the location of an Allied camp for “disarmed enemy forces” at the end of the second world war. Holding up to 100,000 former German soldiers, it was the site of starvation, illness and summary execution. As a young man, her grandfather would cycle past piles of corpses on the roadside. “The sky is full of birds,” she sings, contrasting natural beauty and human horror.

The red dress of the title, worn by her 16-year-old grandmother to a village dance, is a symbol of beauty and freedom, not least because it was fashioned from the material of a despised Nazi flag. Co-written by Liam Hurley, who also worked on Wind Resistance, a show that celebrates family, nature and the ties that bind goes on to pack a fierce political punch.

If the repeating patterns of Rheingans’s score are hypnotic, the loops and harmonies of Finn Anderson’s score for Islander: A New Musical (★★★★☆) are astonishing. Performed by Kirsty Findlay and Bethany Tennick, mesmerising in their focus and vocal prowess, this folk tale is set on a depopulating Scottish island where Findlay’s Arran, one of the Finfolk of Orcadian myth, is washed up and discovered by Tennick’s incredulous Eilidh.

On land and water, the girls are living through times of stress: Arran guilt-stricken for a failure in animal husbandry, Eilidh exasperated by her island’s economic decline. The sense of people struggling to find equilibrium with their environment is strong. Written by Stewart Melton and directed by Amy Draper with elemental grace, it’s a gorgeous production, rich in wit, musicality and transformation.

Demonstrating a feel for urban space is Taylor Dyson, whose Ane City ★★★☆☆ for the young Elfie Picket company is a gutsily performed homage to Dundee, where an English literature student returns having been away in Glasgow. In a lively blend of spoken-word poetry and night-on-the-tiles narrative, she describes a town of which she is less proud than protective, meeting hippies in the Art Bar and hallucinating about the statue of Robert Burns, while recalibrating her relationships with friends, family and the landscape of her youth.