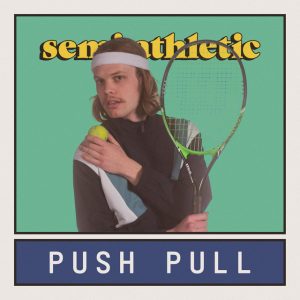 Two years ago I walked into an open mic event organized by SFU Reslife to welcome first year students living in residence. I remember seeing this long-haired guy with an acoustic guitar onstage and wanting to look up the songs he was covering online later — that is until he mentioned that these were his very own original songs! After that performance, I would say everyone that lived in SFU residence during Fall 2017 remembers the name Mark Falk.

Mark is currently a third year student in the Beedie School of Business, but also a full-time musician and song-writer, who has strategically chosen to use his major for the benefit of his musical career.

When I first met him, Mark had already released two albums and an EP under the name Mark Allan Falk. Now, he has finished recording an album for his new project Semi Athletic, and he was ready to share some details over the phone with The Peak.

Pamela: How did the Semi Athletic name come about?

Mark: So, I feel like this album is better than the ones I’ve released in the past and I needed a separation from the new and the old stuff, so I decided that I should start a new band name and I wasn’t sure what to call it, ‘cause that’s pretty important since it should last for a while. After brainstorming with friends and family, I came up with Semi Athletic because when I was a kid I used to play a lot of sports and if I didn’t get into music I’d probably still be more into sports. It’s also kind of funny and it gets a good response from people I think, and there’s a lot of imagery that I can use for branding, and endless ideas are influenced by the name.

P: Tell me about your new album!

M: So I recorded it last August at my friend’s studio called Portside Sound. My friend’s Jamie Sego, and he helped engineer the album. I wrote the songs all throughout last year and then demoed a lot of them at school in my dorm room and then when I got to [my co-op in] Alabama I just went in to the studio on weekends, in the day here and there, recorded it there . . .  and got a lot of my friends from the South of Alabama to record with me and play on it as well as I got a couple of friends to play some drums, bass, strings, and vocals.

P: What global idea or style do you think the songs in this album share?

M: There’s 9 songs in total. 7 of them were written in my first year of university and I guess most of them correlate to things that happened back then, and 2 of the songs were written the year before so they’re close timeline-wise. And the sound of the songs, the studio, and the people playing on them had a big influence on how each song ended up sounding.

P: And what do you think distinguishes this new album from previous projects?

M: I feel like it was a natural progression, so with all of my releases in the past I gradually got more comfortable finding my own kind of sound and with every release I feel like my sound got more refined until this release (the one coming up and the two songs that are out). I feel like the songs are cohesive in comparison to what I’ve done before and they fit well together but they’re still different enough that it keeps it interesting.

P: Besides Bahamas (Mark loves Bahamas), who are your main artist inspirations?

M: Let’s see, I made a Spotify playlist before I started recording.  Some examples are Jackson Browne. I like the way his lyrics and melodies work well together and never feel like they’re fighting. Glen Campbell, a song in particular: “Wichita Lineman.” Then some newer artists would be Andy Shauf and Joey Dosik, as well as Frank Ocean and Daniel Caesar. I was also listening to the album Cranberry by Hovvdy.

P: How hard was it to record the songs and make them what you want?

M: Honestly, recording comes pretty naturally to me by now, since I’ve already recorded some albums and EPs, and I was able to get the sounds that I was going for. Also, I was working with such talented friends and since we’re close friends, it was really easy to communicate with each other and get across the message, which was very beneficial to the songs.

P: What are your future plans for this album?

M: I’ve released two songs: “Push Pull” and “Casual,” and the next song called “Down” [has been] released on Friday July 19. I will be releasing a new song almost every other week.