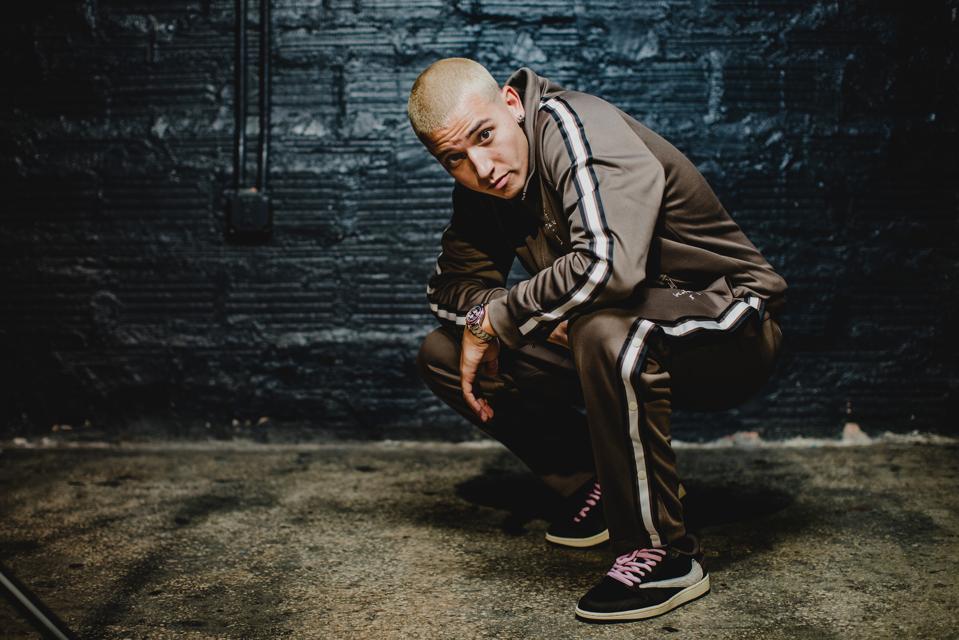 It was approaching 4:00AM at Miami’s Wynwood Factory and Sky Rompiendo appeared to have hit his stride. Nodding his head in the crowded DJ booth to hit after hit, the powerhouse producer and songwriter behind some of the biggest singles in música urbana–and one of the year’s biggest Spanish-language albums–smiled at the crowd in front of him, a writhing mass of reggaetón devotees who intended to keep the perreo intenso going until sunrise.

Headlining Red Bull’s Estados Unidos de Bass, the inaugural Latin music edition of the long-running United States of Bass concert series, Sky essentially soundtracked his rise from J Balvin’s abiding studio architect to becoming one of the most prominent and powerful figures in urbano. In his capacity as a curator for the event, the Colombian artist born Alejandro Ramirez brought in a number of others to the two-room nightlife experience, resulting in a diverse lineup reflecting the history and breadth of sounds coming out of, or otherwise influenced by, Latin America.

“I wanted to work something out with Red Bull years ago,” Sky explained backstage during soundcheck. “I know it’s a very big brand that dedicates a lot of time to the music and the growth of it.”

“I wanted to bring out a different perspective of a concert, like a showcase or whatever you want to call it,” Sky said of his concept for this installment of the series. “I wanted to establish something with the Latin culture, with the Latin success right now.”

Hosting the event in Miami was important for Sky, considering its place as a cultural center and commercial zone for Spanish-language entertainment. The Latin divisions of the major record labels have offices here, as do several notable indies, and many of the key producers and artists in música urbana in particular keep studio space or residences in the area. Television giants Telemundo and Univision operate flagship stations from the city, producing some of the programming from here.

In effect, Miami serves as a convenient stateside hub for Latin music, with a built-in demographically harmonious consumer base. As of July 2018, the U.S. Census Bureau estimates that just over 69% of the county’s residents identify as Hispanic or Latino.

“People chasing that dream in music, especially us Latinos, gather up here in Miami,” Sky said. “A lot of things that are here that connect us. So, Miami is the right place to catch up with people and stay up with things in the Latin industry.”

From Sky’s perspective, the city’s role as a talent incubator serves to inspire him. For years, he made music for others, providing much of the music for J Balvin’s albums up to and including this summer’s Bad Bunny collaborative effort Oasis. Recently, he’s stepped out into the spotlight as an artist with tracks of his own, including “Bajo Cero” with Jhay Cortez and MadeinTYO and “Karma” with Balvin and Ozuna.

“It’s a lot of names behind the boards, the recording booth, in the recording process,” Sky said of some of his choices for Estados Unidos de Bass. “This is an opportunity for a lot of people to show their talent and to show their personal perspective–not the artist that they produced.”

With that in mind, it made sense that he would be joined in the DJ booth at one point by Tainy, the producer behind the bulk of Bad Bunny’s tremendous X100PRE album and co-executive producer with Sky on Oasis. A united front for an eager audience, the duo’s responsibility for so many current and recent música urbana hits cannot be understated, and their collective power was felt in the room.

Still, while Sky now explores the peaks of success in music, he insisted that the next generation of producers drives him now. “The youth, the kids that are right now in their basements or their rooms making music–as we used to make music–that keeps me inspired,” he says.

“When you find out these kids are inspired by us and they keep bringing new stuff to the table, it’s when you get motivated and you keep going.”