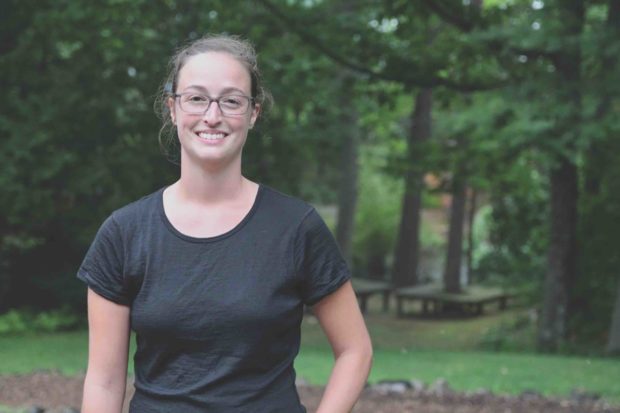 Anyone who attends a concert, play, or convention knows that audio quality can make or break their enjoyment of the experience. For performers, getting their message across allows them to connect with their audience more meaningfully. If Maria Ulrich is the wizard at the sound board (or more likely these days, at the tablet and monitors), then lucky listeners and presenters alike can relax under her professional support.

At barely 30 years old, she already has a decade of experience and training under her fingertips as a live sound audio specialist. The eldest of three children, she grew up in Leelanau’s Elmwood Township and attended Traverse City West High School.

As a teen, “I went to a lot of concerts at places like the American Legion Hall and the UAW Hall to listen to local bands play. As much as I loved going to them, I never had any desire to play music myself, or be in a band. But I liked that world, that community.

“I was an emo kid,” she laughs, referring to the moody, intense style that evolved from punk rock culture—although she also soaked up the eclectic vibes of folk, country, indie rock, even hip hop.

“I went to college at Columbia College Chicago, and earned my bachelor degree in Live Sound through their Audio Arts and Acoustics program. I graduated in 2011 and took a job in corporate A/V, working for a company that contracted with a hotel chain.”

As she negotiated the fast-paced world of Windy City business up and down the Magnificent Mile, she was also honing her people skills. “As you learn to talk to all kinds of people and speak their specialized [business] languages, you learn what they want and need, even if they can’t always articulate it. It’s really helpful that my dad is a psychologist!”

After a year, she moved to San Diego for personal reasons. “But it turns out I’m not a California girl,” she says. “I love the seasons.” Back in Traverse City, she pondered her next career possibilities: Return to Chicago? Maybe Detroit? Both have thriving music scenes and both are close enough to an Up North girl’s home turf to be viable options.

“Then I ran into a former classmate in Traverse City who was starting a new venture in town. That’s how I became the in-house tech at The Workshop Brewing Company,” in the Warehouse District. She also did sound for the former Inside Out Gallery as well, serving as the sound person for local groups as well as more recognizable performers in music and comedy who came to town.

Eric Hines is a dedicated audiophile and the general manager of radio station WNMC in Traverse City. He first came across Maria at a Joshua Davis-Joe Wilson show at The Workshop that the radio station was broadcasting live.

“She was doing sound for them, and we were working together; she was giving me the kind of feed that I needed in order to broadcast well. She not only wanted to do things right, she kept paying attention and listened to the music throughout the set, which is not something I usually see from sound people. She was continuously adjusting and readjusting the sound as instrumentation changed, as the crowd got bigger. She was totally focused on making sure the musical experience was the best she could make it throughout the show. That definitely impressed me; I don’t see that all the time.

He continues, “I’ve worked with other folks who’ve dealt with many, many more sound people than me, and she certainly stands out [with them as well]. She has huge potential. I think her ear and her sensitivity—that’s the stuff that good record producers are made of, not just sound people.

“At the time, she was not busy. I said I would try to help with that as best as I could, and . . . that we certainly could use her expertise and her passion at the radio station. She did some shows; she helped with live events. She volunteered to do sound for a bunch of stuff until she got busier. She was enormously helpful in making events work for us.”

While at the Workshop, Maria’s dedication to her craft and her sympathetic approach to artists’ needs began to pay off in surprising and gratifying ways.

“I met different bands coming through, including this local act that was just starting to get big. Maybe you’ve heard of The Accidentals? They told me, ‘When Katie [Larson] graduates Interlochen Arts Academy, we’re going on tour, and we’re going to need a technician.’”

That’s how Maria found herself on the road with the Accidentals in 2015 for “an incredible year” of professional and personal growth. “We did 213 shows; they won on Bandsintown (an international website that connects fans with musicians) Big Break program for emerging artists. We did Electric Forest, SXSW—so many concerts. I really got to see the full spectrum of sound and bands. We were a family; it was awesome.”

While exhilarating, the experience was also exhausting. “Being at home was so weird for me,” she says. “We would be home for such short periods of time—two or three days—not enough time to relax or anything.” As the tour came to an end, she realized she didn’t love being on the road—at least “not at that pace.” But she knew she wanted to continue down her chosen path of live sound engineering.

Back home in northern Michigan, she thought, “‘How do I do this? What’s the next step? Do I live here? Chicago again?’ I thought I was going to move away, but people kept asking me to do sound for shows here. I picked up a gig here and there, and as I needed more equipment, I started—slowly and sustainably—to collect more of that. I set up my website; I also started my own company, Leelanau Sound, so I could have insurance.”

In 2016, she ran sound for Fountain Point’s summer concert series on Lake Leelanau. The resort wanted to find ways to run a sustainable music venue without having to pass on all the costs to ticket holders. In 2017, she added booking, ticketing, and training volunteers to her skill set. “And in 2018, it went even better! But it needed to be more than just me.”

This summer, Ulrich worked with acclaimed sound engineer and Manitou Music series director Jack Conners. Next year Ulrich will take over running the series, which is a project of the Glen Arbor Arts Center. She also is part of the Dennos Museum’s tech team, and is working on Parallel 45 Theater’s upcoming Alphabet Experienceproduction at Old Town Playhouse this winter.

Attending concerts or other live events in her limited free time can be frustrating to her finely tuned ear, she says, as she can’t help but notice when the audio quality is poor or erratic. But every listen is a learning opportunity, as she analyzes how she would work the sound to make a better experience for performers and audiences.

Impressively, she has been able to make a living as an independent, full-time sound engineer for the past two years, working not only musical performances of all genres (some gigs in recent weeks include Blissfest, Rare Bird, and the TC Pride event with 2Bays DJs), but also plays, conferences, weddings, and other parties—any live event that needs its “message to come across clearly and ensure [an] event goes off without a hitch,” as her website states. Clients include May Erlewine, the National Cherry Festival, Leland Public School, and the TC Film Festival, among many others.

As an audio engineer whose reputation is growing, appropriately enough, by word of mouth, Maria’s career could go in so many different directions. For now, she plans to keep her focus on her first love: live sound; “Although I never rule anything out,” she adds with a smile. That adventurous spirit, along with her meticulous approach, rapport with artists, and hard-won experience, make it clear that Maria Ulrich has a sound future ahead of her.