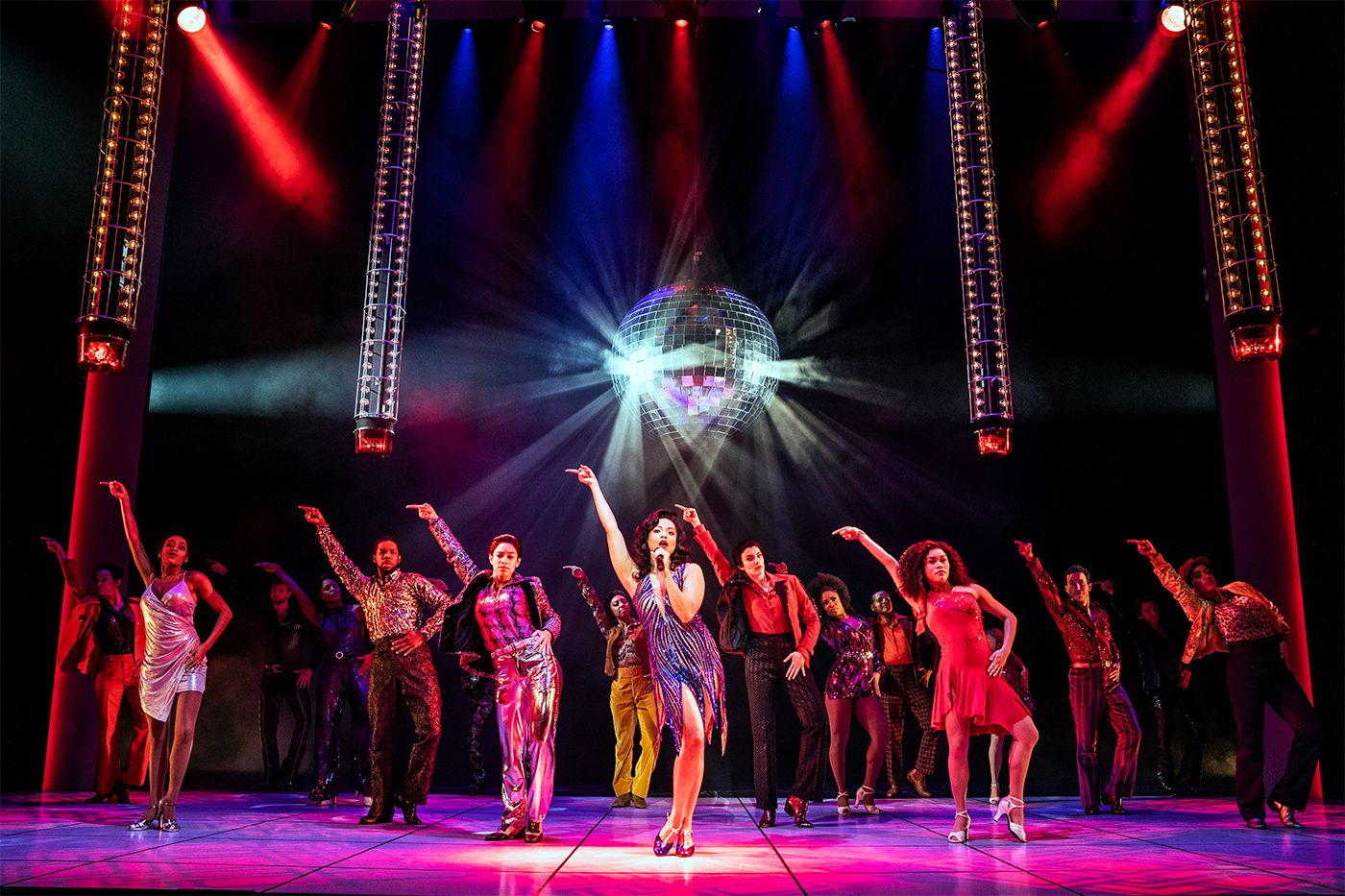 While it’s a fact of modern musical theater that jukebox musicals of both the biographical and non-biographical sort are popular money-makers, it’s almost universally true that they tend to be despised by critics. That was true of Summer: The Donna Summer Musical, which opened and closed on Broadway last year within about six months, but it’s now on tour because: money.

There’s no doubt that Donna Summer’s catchy retro catalogue of disco and post-disco hits is crowd-pleasing draw, so the choice to put the show on tour was a no-brainer — especially given the budget-friendly, bare-bones set design by Robert Brill, primarily made up of LED light boxes that are raised and lowered over the stage. But Summer: The Donna Summer Musical is a prime example of how awkward the biographical jukebox musical can become — especially when one’s personal life arc is messy and without easy lessons, and when one’s music is so confectionary and devoid of nuance.

The good and fun parts of this show are tied to Summer’s best songs, including her infamous breakout hit, the orgasm-filled extended mix of “Love to Love You Baby” produced by Giorgio Morodor; and her early 80s anthem “She Works Hard for the Money.” But mapping the complicated life of LaDonna Adrian Gaines using the disco hits of Donna Summer results in a deeply trite, flash-card version of a biography that’s neither enlightening nor satisfying.

The story is told using three Donnas, much The Cher Show uses three Chers to illustrate different phases of the great diva’s life. In this case there’s young Duckling Donna, Disco Donna, and the older Diva Donna — the latter has to have stellar pipes, while Disco Donna has to do the bulk of the dancing. The most interesting chapters in the real Donna Summer’s life happened in the mid-1970s when she found herself in Munich in the touring company of Hair, and then gets discovered by a legendary music producer, Morodor, who encourages her to let her sexuality shine through on her breakout hit. But then things turn messy with drugs, abusive men, a falling out with her record label, and Donna becoming born-again Christian in 1979. Most of these moments we get only as vignettes with no depth or detail.

Is there something campy about it still to enjoy and chuckle at? Sure. But let’s talk about some of that camp — there’s an awkwardly wedged-in line toward the end of the show when Diva Donna (the excellent Dan’yelle Williamson) says she spent a “lot of time on her knees” over the years, and “not just praying.” We’ve come to understand that Donna was never comfortable being a sex goddess or “Queen of Disco,” but we never saw her actually owning her sexuality or actively doing any sexual favors to get ahead, so this just comes out of the blue. Then there’s a moment when a German boyfriend who’s followed her to Los Angeles shows up at her house with a gun, and there’s an unintentionally comical fight scene in which she knees him in the nuts and knocks him out with a gold record — all set to the duet Summer did with Barbra Streisand, “Enough is Enough,” here sung by two versions of Donna.

Many of the male roles in the cast, including Giorgio Morodor and most of the ensemble, are played by women, and this is never really justified or explained — except that tensions around Donna’s relationship with men hover over the entire show, from her father to a priest who we learn abused her, though that story is glossed over quickly like all the rest.

In between the ballads and rollicking dance numbers are a slew of trite phrases to serve as connective tissue, none of which give us any insight into the real Donna Summer. (“Why aim for the mountaintop when you could shoot for the stars?” is one, or “Once you’re on a roller coaster it’s real hard to get off,” which is how she sums up her amphetamine addiction.)

And there is a lot that would have been worth exploring in a real or slightly fictionalized way if necessary — what it was like for young LaDonna from Boston to be thrust into the glamour and hedonism of Studio 54, for instance; or what really went down at an Atlantic City “comeback” concert in 1983 when a Village Voice reporter claimed that Donna had chided her gay fans for sinning against god, likened AIDS to a punishment, and infamously said that “God created Adam and Eve, not Adam and Steve.” Summer repeatedly denied having said these things in the ensuing years when the backlash essentially destroyed her career. And it’s difficult to say whether her vehemence was because she actually didn’t say any of it, or because she grew to regret it after realizing how much it hurt her fans and consequently her livelihood.

In the play, all we get is Narrator/Diva Donna explaining the incident in retrospect, and giving a new explanation: She had been trying to get the women in the audience that night in Atlantic City to sing along in certain parts, but the “boys” kept drowning them out, so she made an off-hand remark that was unintentionally insulting to her legion of gay fans — and also in keeping with her recent turn to the Bible.

Steven Grant Douglas does a good job playing Donna’s ultimate romantic savior, her last husband Bruce Sudano, and his voice is great as well. As the New York Times noted in its review last year, Sudano is listed as a story consultant on the show, and perhaps that is why “all the rough edges have been removed.”

Fans are left with a few concert-like moments, complete with backup dancers, and all the hits get played. But unfortunately, the story treads in shallow water and Donna Summer remains as much of a mystery to me as she was before. And I get the feeling I just saw a heavily redacted life story that made sure none of summer’s surviving heirs had to face any troubling realities about their departed Donna.