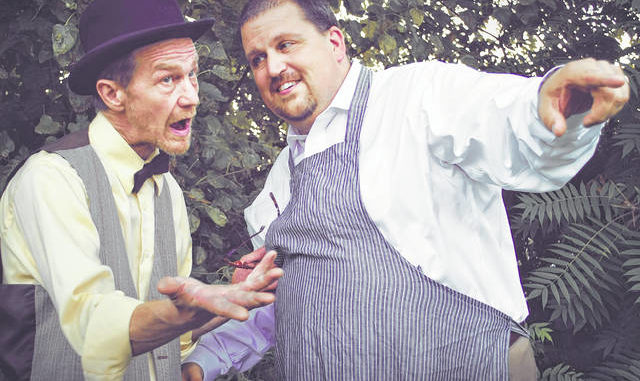 George Steltz, of Hanover Township, and Ian Hastings, of Dallas, portray a pair of neighbors who pretend to feud, hoping their children will fall in love, just to be contrary. – Submitted photo

Portraying a pair of fathers, who happen to be neighbors, George Steltz, of Hanover Township, and Ian Hastings, of Dallas, shared a song about the woes of raising children.

“Dogs got to bark. A mule’s got to bray,” they sang during a recent rehearsal of “The Fantasticks” at the Music Box Dinner Playhouse in Swoyersville. “Soldiers must fight and preachers must pray. And children, I guess, must get their own way.”

So, how do parents get their own way? Sometimes they have to use reverse psychology.

That’s why Mr. Hucklebee and Mr. Bellomy — the characters Steltz and Hastings portray in the musical that opens Sept. 6 — built a wall between their two properties and pretend to hate each other.

“Our enemy is up to something, him and his no-good son,” Bellomy tells his daughter, Luisa, on one side of the barrier.

“I’ll strip down those branches where an enemy could climb,” Matt’s father, Hucklebee, says on the other side, announcing his intention to make the wall more formidable. “I’ll jag it up with glass.”

All this ranting has the effect the two dads desire — their son and daughter fall in love during a show that offers, among other songs, the lush “Try To Remember” and the fun “Plant A Radish.”

“The music is sweet and delightful and alive,” said Michael Gallagher, of Wilkes-Barre, who plays a character named Henry. “Boy meets girl and it seems like they’ll have a happy ending.”

At least, that’s how Act I ends.

In Act II, the audience will watch as Matt and Luisa question their love, separate for a time — and suffer.

Matt will go off into the real world and discover “it’s not always a happy and loving place,” said Tyler Saar, of Scranton, who portrays Matt. “He’d do anything for Luisa, and he goes through hell and back.”

While Matt is learning how harsh the world can be, Luisa, too, is learning life isn’t all about waking up to the sound of larks and peacocks and taking time to “hug myself until my arms turn blue.”

Luisa experiences some of life’s ruder aspects, thanks to a character named El Gallo, who also serves as narrator.

“He’s an anti-hero,” said John Toussaint Jr., of Dallas, who has that role. “He’s a villain disguised as a hero, but some people might think it’s the reverse. He’s also a comic relief.”

The script “is very allegorical,” said Gallagher, who saw the show off-Broadway at the Sullivan Street Playhouse in New York City in 1982.

“That theater was small and intimate, with only about 60 or 80 people,” he said, adding the new Music Box production will have a similar intimacy, especially because it’s using a thrust stage which will bring the cast closer to the audience.

As for the message in this allegory, Steltz said it’s that “People have to discover things for themselves. You can’t make choices for them.”

“It’s about life and the journey that takes you there,” said Michael Marone, who is directing the production as well as playing the role of Mortimer. “It’s timeless and I think that 100 years from now it will still be relevant.”

In a case of art imitating life, Luisa and her father are portrayed by 17-year-old Abby Hastings, of Dallas, and her real-life dad who, she said, “decided an hour before auditions” to accompany her.

He’s not inexperienced. When he was a student at Pocono Mountains High School, Ian Hastings said, he had such roles as Barnaby in “Hello, Dolly” and Marcellus in “The Music Man.” More recently, daughter and dad appeared in a production of “Guys & Dolls” together with Abby as Sarah and Ian as her grandfather.

“It’s fun and it’s a learning experience,” Ian Hastings said. “I wanted to be part of what she loves to do. All three of my girls are into theater.”

Meals: For all shows, audience members have the option of purchasing a dinner and show ticket or a “show only” ticket. Doors open at 6 p.m. and the meal begins at 6:30 p.m.; for matinees, doors open at 1 p.m., with the meal beginning at 1:30 p.m. New for this show, the Music Box is offering a Sunday brunch instead of its regular buffet. Brunch and dinner tickets must be purchased in advance.

George Steltz, of Hanover Township, and Ian Hastings, of Dallas, portray a pair of neighbors who pretend to feud, hoping their children will fall in love, just to be contrary.