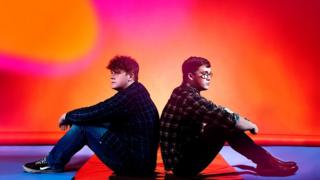 DJ Huw Stephens looks at how Welsh language pop music has broken out way beyond the country’s borders.

It sounds like such a normal thing to do: Enjoying music where the vocals are sung in your own language. You’ve possibly never thought about it.

It’s a little different when the language is Welsh.

Something remarkable has happened recently in the Welsh language music scene. There is a spirit and a sense of creative freedom that has energised young music makers.

Alffa, a rock duo from Llanrug in Gwynedd, have become the most streamed Welsh language act ever, with three million streams and counting for their singles Gwenwyn and Pla.

Sion Land and Dion Jones from Alffa are part of a scene of independent thinkers that is varied and eclectic, including bands, folk artists, R’n’B and electronica, with the Welsh language tying them together.

I spoke to Gwenno during Tafwyl, a yearly celebration of the Welsh language in Cardiff city centre. More than 40,000 attended in 2019.

Earlier in the day a march took place celebrating 70 years of Welsh language education in the capital – a huge achievement.

Gwenno has released two albums: one in Cornish and one in Welsh.

She referred to the Super Furry Animals‘ hugely successful Mwng album, sung entirely in Welsh and released in 2000, as a landmark moment for music sung in Welsh.

“To do that at a point when they were so popular, that was a turning point,” she says.

“It gave people some kind of touchstone and… it’s just another Super Furrys record, and it was amazing.

“You talk to people about Welsh language music and it’s not a genre, it’s just the easiest way to sing and they don’t think twice about it.”

Gruff Rhys from the Super Furry Animals refers to Rhys Mwyn – a musician and promoter in the 1980s and now a broadcaster on BBC Radio Cymru – and his compilation album Cam o’r Tywyllwch, as an important release in the story of Welsh language modern music.

“It was like a drip feed of really great music that people couldn’t ignore,” he says.

As Gruff prepares to release his new album Pang! via Rough Trade records, I’m reminded of the cultural power of our music makers.

For Gruff, to release an album of songs in Welsh is a completely natural thing to do.

But his album, and music by Alffa, Gwenno, Adwaith and many more, will travel the world.

Their cultural influence in keeping a language relevant, interesting, creative and vital, in a worldwide context, is enormous.

Gruff says: “Today is a different era in pop. People are far more open to music from a different nationality or culture.”

In 2019, one label keeping alive the DIY ethos of Rhys Mwyn’s Anhrefn Records – but now with the internet as their main tool, is Libertino Records.

Gruffydd Owen heads the label and is a huge champion of young Welsh musicians who record, gig and have built a community for like-minded music fans.

All the bands on his label record in the Welsh language.

“Artists who were born in the late 90s, early 2000s, they’re far more world consumers of music, and there comes from that a sense of confidence,” he says.

For those wanting to find out more about music sung in Welsh, I can recommend the new music shows on BBC Radio Cymru, the Pyst distribution network, and Lwp on S4C.