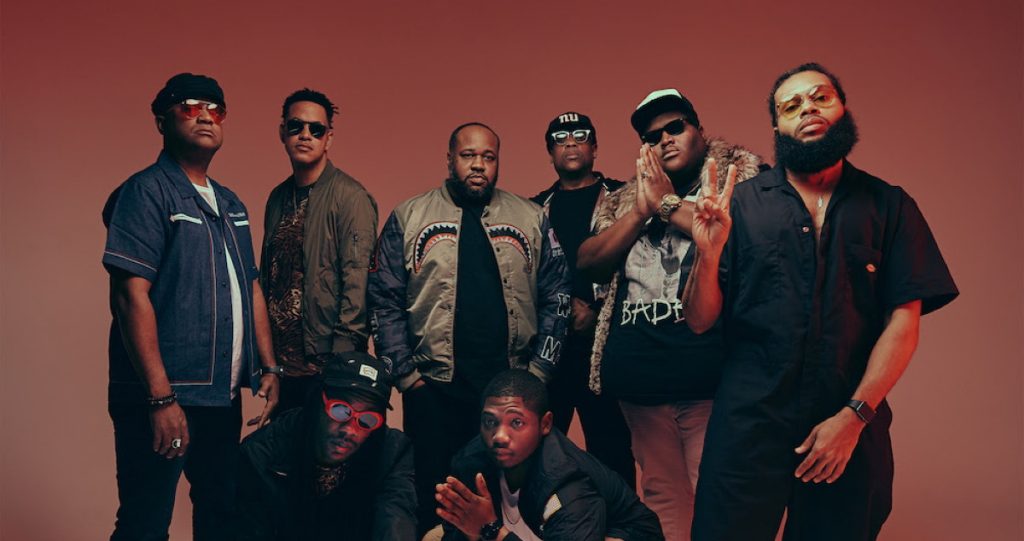 The Soul Rebels are a brass ensemble and one of the coolest combinations of history, narratives, jazz, including  the evolution of hip -hop and all genres of music. They have mastered the art of collaboration, diversity in music, and universal appeal.

The Soul Rebels combine and honor brass instrumentation from a place of deep curatorial practice and authenticity. They are gumbo, jambalaya and craw fish etouffee. They are bounce music and swamp land. They are the French quarter, Lemonade, and the Essence festival every single year. They are the unsung orators of the brass movement.

The Soul Rebels have formulated and perfected a sound that influences culture beyond jazz, funk, rock and pop.  Over the last 25 years, they have created their own voice through their unique showmanship and sound. The Soul Rebels have performed with Katy Perry, Robert Glasper, GZA from Wu-Tang, Smiff &Wesson, Green Day, Kanye West, Macklemore, Talib Kweli, John Mayer and Nas. They have an endless roster of creative work and performances with some of the best and celebrated artists in the industry.  Through the underground, through the unseen, and their own rebellion, The Soul Rebels continue to touch and transform people. They transcend the soul of music beyond barriers.

Check out my question and answer session below with Lumar Leblanc (snare drum, founder)

How long have the “soul rebels” been together?

The Soul Rebels have been around since 1991, but the current band line up today is about six years old. Today’s Soul Rebel band member line up has been a huge part of our current success as a world touring group, backing up and collaborating with major hip hop and pop stars.

Do people compare you to the Roots?

All the time. Even people in the music business compare us to The Roots. We actually have an amazing relationship with The Roots crew and have worked with Black Thought. Lyor Cohen once told us, we should be on late night tv as the house band for the next big late night tv show. We’ll see about that….

What person or what group would be a dream collaboration?

Jay-Z, Kendrick, Beyonce, Lady Gaga and Chance. We love them so much.

How has hip-hop influenced your music?? And who are some of your favorites to work with in the industry?

Hip Hop is a life style, it’s our roots. We grew up listening to Biggie, Rakim, Talib Kweli, A Tribe Called Quest along with all of the funk, pop music, rock and many styles of music. Hip Hop actually is heavily rooted in the funk and jazz spirit. As a brass ensemble with live drums, we bring the hip-hop music we play to life. Live instruments are the core of hip hop with samples, and we often work with artists that come from an era of sampling jazz, funk, soul and live horns and drums. We love working with our hip-hop heroes. Artists such as Rakim, Slick Rick, Melle Mel, some of the Tribe Called Quest members and many others, are our good friends and musical collaborators. We’ve been working with Rakim for years, and he’s very much connected to the jazz and soul music legacy. We’ve been lucky enough to on a regular basis, work with the pioneers and statesman of hip-hop culture.

What is one of your main contributions to music?

Spreading love, a good vibe and putting in 1000% every time we hit the stage. Also, showing people that music is about freedom and freeing ourselves from the constraints of society. The Soul Rebels work with Nas, but also Marilyn Manson…and we’re a brass band. That goes to show you that if you have a free and open mind, spirit and attitude, music has no genre and we can all be one. We bring soul and feeling to all our musical environments, and whether a band/artist we’re working with is Metallica whom we do work with and perform with, or the pop star G-Eazy whom we also perform with, at the end of the day, soul and honestly in music is what connects us all. We’re able to operate in many different musical environments because we bring soul to all setting.

Who influences/influenced you and why?

Family, spirituality. In terms of artists: Michael Jackson, Stevie Wonder, Biggie, Rakim, The Doors, Bob Marley, Miles Davis, Louis Armstrong, Earth Wind Fire. So many influences, it’s hard to list them all. Our fans and our families are the biggest sources of inspiration and influence.

Where did your name come from? And can you be compared to the historic album of the same name by Bob Marley and the Wailers.

The Soul Rebel started out as a traditional outfit called Young Olympia which it was, the younger version of the Olympia Brass Band. We started out doing the more traditional music of New Orleans basically paying our dues and learning as much as we can from the older musicians a head of us. Being that most of the guys in the band are from The Hip Hop era, we wanted to start incorporating more of the music we were listening to at the time. We started mixing the sounds of the music that the different musicians in the band like. As we started doing that, we realize that we were getting farther and farther away from the more traditional New Orleans sound so not to disrespect it, we decided that we would start our own band. We started out doing shows at the famous Tipitina’s opening for the famous Neville Brothers. Cyril Neville loved us, and said to us one night, “You guys have a very unique sound man you guys have like a Soulful sound but it’s like you’re rebelling against a lot of stuff that a lot of brass bands are doing. You guys are like soul rebels”. We have been going down that path ever since!

What’s next for the group?? Any individual projects or upcoming music/collaborations.

We have many collaborations in the works and we’re touring , but we’re mainly focused on working on a new album right now. It’s definitely going to be an urban, contemporary-driven album. It’s going be a very strong dynamic piece. The people we have on board are amazing and iconic…the world is really going to be excited when the album comes to fruition. Expect major mc features. We can’t reveal specifically who might be on the album and who is producing it. But expect new material and an energy never before heard from a brass ensemble.

This article was done a long while before the group’s album was crafted, done and scheduled for release .  As of August 2019, The Soul Rebels will be releasing a new album, entitled “Poetry in Motion” on October 25,2019.