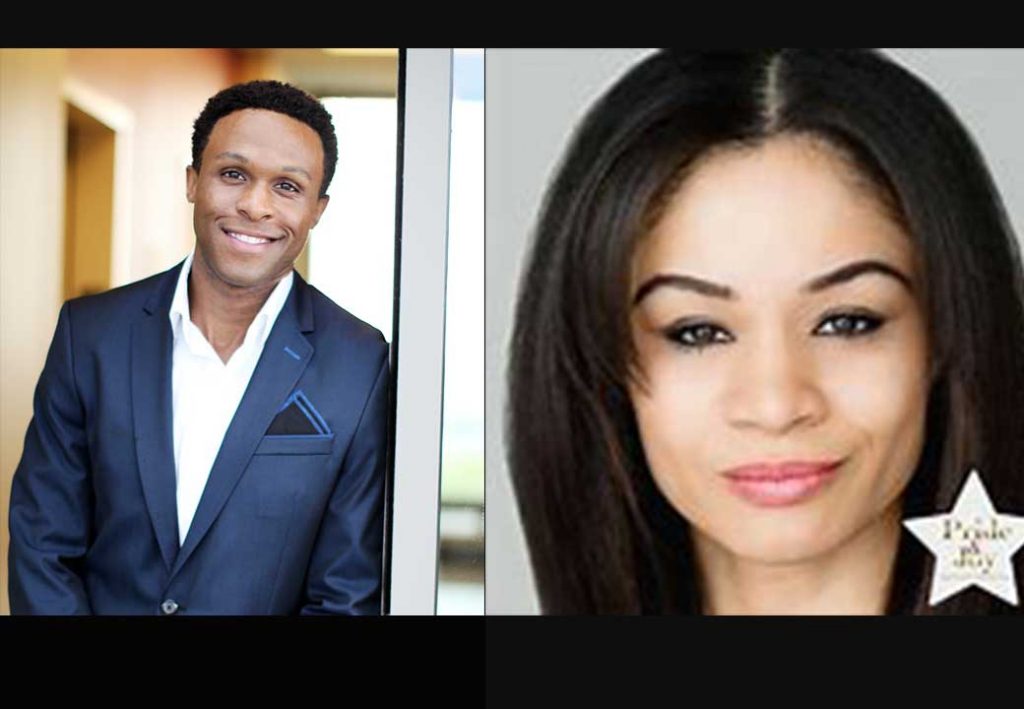 Energetic and very passionate about their work with the musical and keeping Marvin Gaye’s legacy alive, Ms. Krystal Drake (who plays Anna Gordy-Gaye) and Mr. Jarran Muse (who plays Marvin Gaye in the younger years) are a two of the  members from the cast of Pride and Joy: the Marvin Gaye Story. . Both actors  were well versed with the history of his music, his relationship with his wife, as well as the way Marvin felt about writing, singing and performing. Having done a lot of research on the lives of Anna and Marvin Gaye, including speaking to Berry Gordy , Smokey Robinson and a host of friends and family, both actors were  avid about bringing the characters to life.

This duo has a high level of commitment and professionalism that lends to the roles of Marvin and Anna.  Krystal spoke openly about how she brings her character, Anna Gordy Gaye to the stage.

“Anna was a fierce woman in her own right. I try to draw from my own experiences and conversations with people that have known Mrs. Gordy – Gaye.” Krystal Drake share when asked about how she developed Anna as a character.  “Anna Gordy was well ahead of her time. She was a mogul and a success during that time (Motown) who was not seen often”.

Jarron Muse had already played Marvin Gaye on Broadway and was handpicked for his current role in this production.  “I have a responsibility to be Marvin. So, I have to do him justice” he states hinting to his personal connection with Marvin Gaye as a man and a character.

The justice seems to come every night as they embody and peel back the layers of each of their characters. “Marvin is a crooner, a family man, a loving husband and a musical genius.  Jarran said when asked to describe Marvin. When asked to do the same for Anna, Krystal thought before adding, Anna is a sweet, nurturing, kind and family oriented woman”.

They seem to not only portray the character but know them as real people, as a dear friend, as a close family member.

“Marvin only recorded what he felt’ – he truly loved Anna Gordy-Gaye.”, Jarran Muse states. Agreeing, Krystal added, “Anna loved Marvin with every fiber of her soul.”. The responses from the two cast members are in tune, in unison even when speaking  with them separately. They bring the full voice and a story that should be remembered and preserved. Pride and Joy: The Marvin Gaye musical walks you through time, relationships, Marvin’s career and the ups and downs of life. The characters are able to usher you through the Church of Motown.  The responses of Krystal and Jarran beam with respect and a love for the musical stories. They both agree  that a favorite song of Marvin Gaye is “What’s Going On” because it’s timeless and reflects everything that is happening now. Krystal Drakes’ additional personal musical favorite is “Come Get to This” from the “Let’s Get It On” album. Jarranadds that his personal favorite is “Stubborn Kind of Fellow” from Marvin’s earlier years.  They speak about Anna and Marvin as if both Anna and Marvin are guiding them through their character development and performances.

Asked to share bits and pieces about the tour, performing on stage and the audience responses,  Jarran Muse says “When I perform ‘Stubborn Kind of  Fellow’ in full production-singing acting, dancing-it’s high voltage.”

“After a show, Krystal adds,  “I feel  good, like I’m on a journey , like I’m transported to a time [1960’s]when music was real”.This musical is a full blow production of unconditional love. It weaves generations of truth, people and a soundtrack of personal and political change. The musical gets the audience on their feet, crying, smiling and satisfied. “It brings Marvin to life“ Jarran states.  Marvin and Anna will never die, they are the lover we want, the melody we wish we had written, they are the passion we wish for every day. They are the pride and joy that lasts forever.